What The Oldest HikeMtShasta Kid Has Been Up To

Once again, things have been silent on Hike Mt Shasta for good reason. While we began the month with a trip south to the Sierra Nevada, now I have ended the month by going north. I got home a day ago from a fantastic roadtrip through Oregon with my oldest son. Circumstances played out in a way that allowed me to take him on a trip while my wife and younger kids were down in Sonoma County with grandparents. He’s 8 and primed and ready for all sorts of adventures. I got my trucks camping configuration back together, loaded it up and hit the road at dawn. Armed with a new knife and camera, he was exceedingly excited to head out on a “dad trip”. 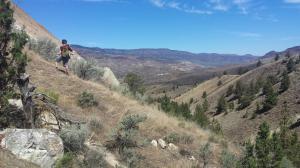 I had initially planned on heading to Hells Canyon or out to Utah or something a little further out of our normal orbit but, given the relatively short amount of time (5 days) and my slight hesitation with solo camping of this nature with him, it worked well to keep things closer to home. Despite the less ambitious trip, it worked out quite well. We saw some of the best that Oregon has to offer, were able to experience how diverse the land can be and enjoy each others company. There were conversations about geology, geography, history, theology, philosophy and beyond. I really hope that the memories made on that trip will contribute to a sound foundation for understanding the natural world and our role in it.

As my other kids get older, I look forward to giving them similar experiences!