Mount Shasta, Timberline, And The Relative Size Of Cascade Volcanos

Though Mount Shasta is the largest and second highest of the great volcanoes of the Cascade Range, it’s appearance is remarkably different in some respects than many of its famous siblings to the north. To me, the most striking difference is the lack of glaciers on the west side and much of the south side of the mountain. When looking at comparable peaks like Mount Rainier and Mount Hood, there are no significant swaths of the mountain that are not encased in giant sheets of permanent ice. Related to this, it seems the majority of these mountains’ bulk lies well above the tree line, giving more of their flanks an alpine appearance that is not present on much of Mount Shasta. Why this difference exists is a function of numerous factors.

Above the tree line in the Sierra Nevada.

The tree line is that point where mountain forests gives way to the treeless alpine tundra that lies at the highest elevations of mountain ranges. Many factors contribute to the determination of what elevation the tree line can be found. The orientation of a slope, latitude, proximity to the Pacific Ocean and numerous other elements are part of the factorial kaleidescope. In the coterminous 48 States, the elevation of the tree line varies wildly. In the southern Rockies of Colorado and New Mexico, the tree line climbs up to about 11,500 feet or higher. In the High Sierra tree line lies about 9,500 to 10,000 feet.

Near tree line on Mount Rainier.

Going north from the Sierra along the Pacific Crest, the northern latitude drops the elevation of the tree line considerably. Here in Mount Shasta at the southern end of the Cascade Range, the tree line sits at around 8,000 to 8,500 feet. In the northern latitudes of the Cascade Range, tree line is found at about 6,000 feet. This means mountains with comparable size and elevation like Mount Shasta and Mount Rainier are going to have strikingly different appearances. The extra 2,000 feet of alpine terrain on Rainier contributes to glaciers being larger, more abundant and creeping far, far lower down the flanks of the mountain. Indeed, the Carbon Glacier on Mount Rainier flows all the way down to about 3,600 feet above sea level. On Mount Shasta the glaciers struggle to extend below 10,000 feet.

So how does all this pull together and affect our perceptions of Mount Shasta? The fact remains that it is the largest single mountain in the Lower 48. At nearly 120 cubic miles (this statistic comes from the latest findings by the US Forest Service and geographers at College of the Siskiyous) it is significantly more voluminous than any other volcano in the Cascades. Yet many give off an appearance of greater size due to their greater area above the tree line. This prompted me to pursue a little thought exercise. I considered what it would look like if the tree line on Mount Shasta was found at about 6,000 feet. The best place where I can find a frame of reference is the point where the Everitt Memorial Highway on Mount Shasta makes its second hairpin turn, which is just below the John Everitt Vista Point. If Mount Shasta were up in Washington or northern Oregon, this would be the point where the trees would cease growing and alpine tundra would begin. It is likely that the area would be near a glacier’s terminal moraine and small patches of meadow would be clinging to the slopes, fed by abundant glacial snowmelt. Yet this area is well beneath the tree line and Mount Shasta remains the largest of the Cascade volcanoes.

In light of this, I thought it would be interesting to compare the Cascade Volcanoes and how much area they have above the tree line. Since the tree line fluctuates, I picked 6,000 feet as a point of reference since it is at or near tree line at most of the big volcanoes in the range. I decided to begin at the southwest corner of each mountain since this is the position of the Everitt Vista, which is reference point on Mount Shasta. I measured each volcano from the 6,000 foot contour in the southwest to the 6,000 foot contour in the northeast. This way there is some degree in uniformity in what is being measured. The series of measurements begins with Mount Shasta, which is the baseline for comparison, and then travels north up to Mount Rainier, which is Shasta’s only real peer in the Cascades.

These findings are imprecise and purely my own, but I think they do manage to give some idea about the relative size of each volcano (and yes, I am a total geography geek!).

A few things to note: 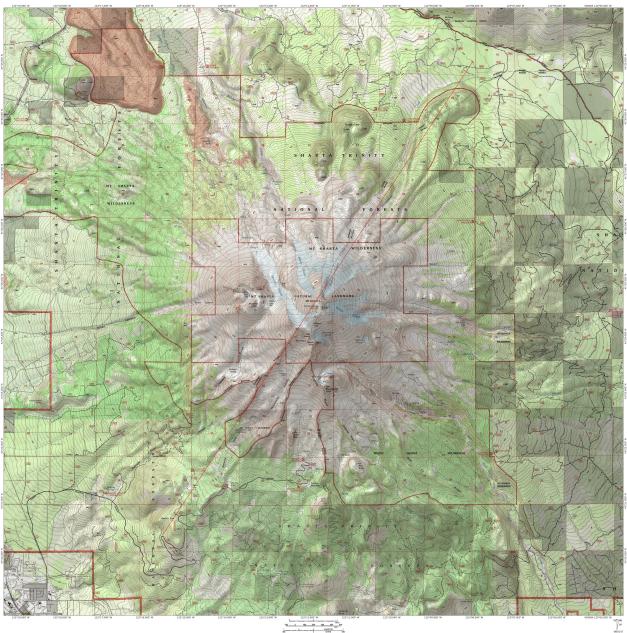 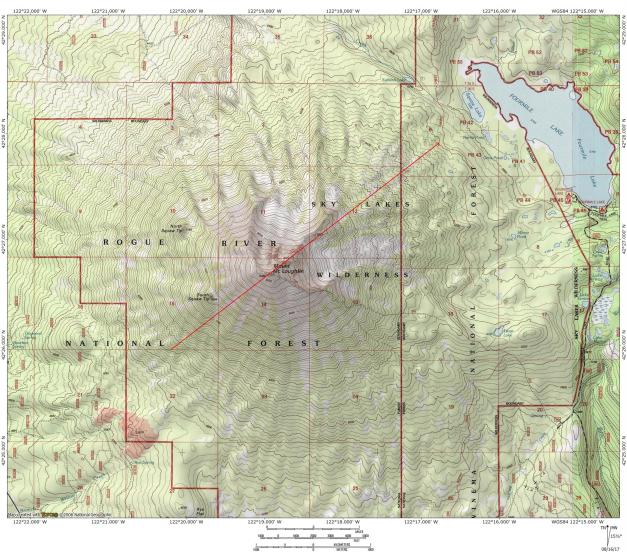 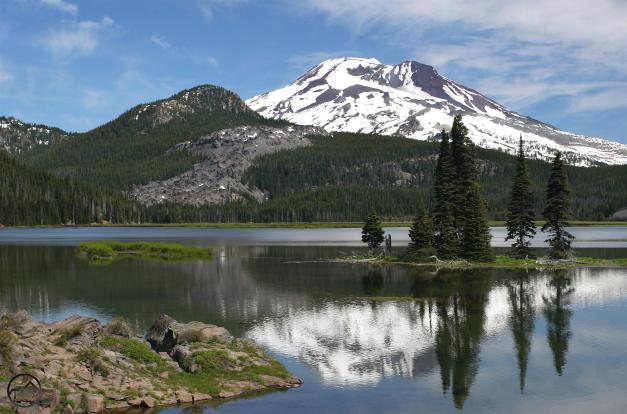 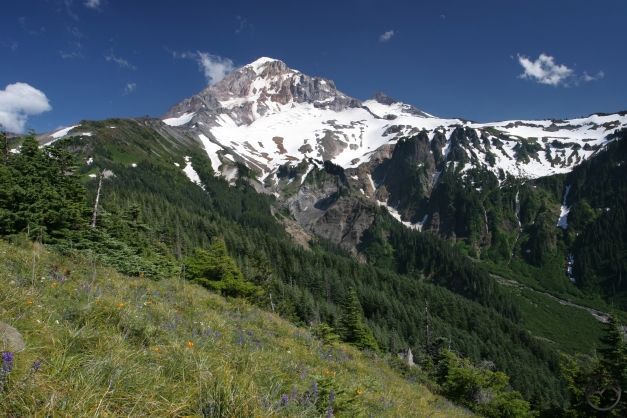 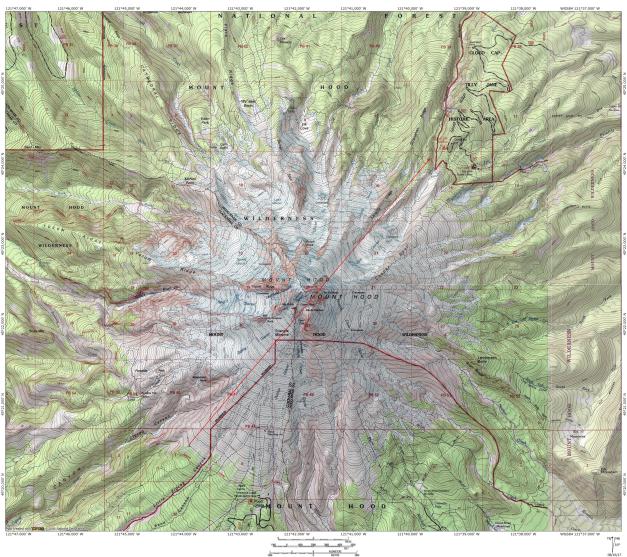 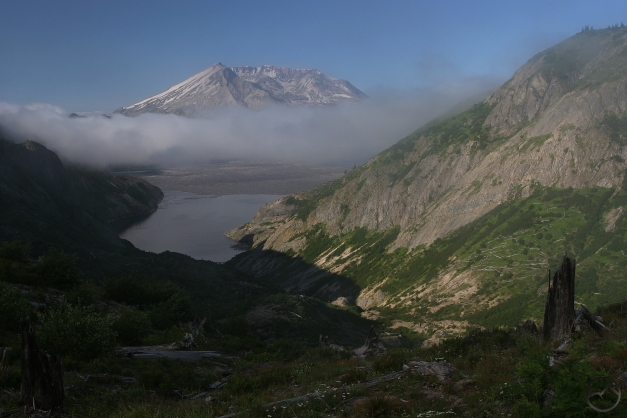 It is obvious from the measurements that Mount Shasta is a massive mountain. The closest peers are the former Mount Mazama and Mounts Rainier and Adams and those are 2.4, 3.7 and 5 miles narrower at the 6,000 foot contour. It should also be noted that all three of those peaks are surrounded by mountains in 4,000 to 6,000 foot range. Mount Shasta, in contrast, continues to slope downward into the Shasta Valley, Strawberry Valley and the McCloud Flats, all of which are at the 3,500 foot level. The mountain has very, very broad shoulders.

Interestingly, a measurement of Mount Shasta’s diameter at around the treeline, estimated at around 8,000 feet shows the diameter is about 6 miles. This puts the diameter of the mountain at tree line comparable to that of Mount Hood and just a little less than what is found on Mount Adams, the third tallest and third largest volcano in the Cascade Range. It worth noting that the measurements at the 8,000 foot contour, Mount Hood is 2.2 miles, Mount Adams is 3.4 miles and Mount Rainier is 5.5 miles. Though greater than Rainier, the two largest and tallest mountains in the Cascades are quite comparable.  Even though the alpine area does not appear as large from some perspectives, Mount Shasta’s timberline region is still substantial. Perhaps it is the lack of glaciers on some quarters of this area that tends to understate the immense size of the treeless parts of the mountain.

The next time you drive up onto Mount Shasta, as you approach the second hairpin turn on the Everitt Memorial Highway and as you pass the vista point, imagine if that area was at the treeline. The mountain would look radically different from how it appears now. Thankfully it is not different and we can love Mount Shasta for all of its great size and its densely forested flanks. More alpine area would be nice in some ways but there is already so much of that area that is seldom explored and the mountain would feel…less without its great groves of ancient Shasta red fir. Likewise, the other volcanoes of the Cascades offer up their unique combination of features and we are given great riches of so many diverse and beautiful peaks. Mount Shasta may be the biggest and among the tallest, but it is still one of many in a collection of exceptional volcanoes.

11 comments on “Mount Shasta, Timberline, And The Relative Size Of Cascade Volcanos”