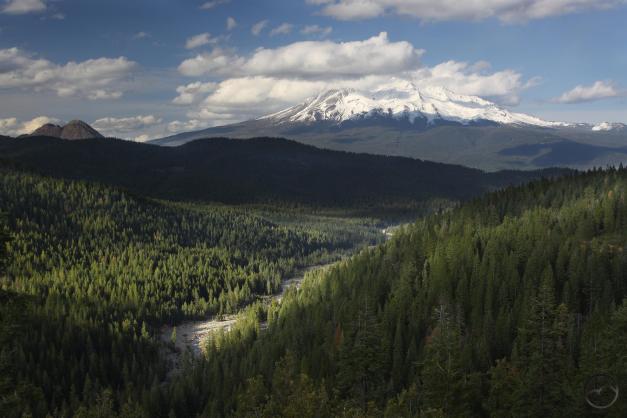 With California still emerging from a terrible drought, water remains at the forefront of many discussions. This holds true here in Mount Shasta, though much of the attention is focused on the vast underground aquifers that supply the area’s abundant springs. Yet there is another source of water that is often overlooked in discussion and it is one that is affected by the drought in a much more tangible fashion. The source in question is the lakes and meadows of the Trinity Divide that feed the Sacramento River. These are particularly important since they mark the beginning of California’s largest, longest and perhaps most utilized river. 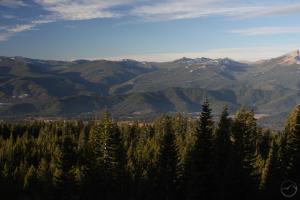 A view of the three headwater canyons of the Sacramento.

The importance of the Sacramento River makes exploring the headwaters all the more interesting and there are many areas to explore and enjoy. The headwaters consist of three forks, the North, Middle and South. They originate from progressively more complex sources. The North Fork begins in a series of large meadows, the water slowly seeping to form the clear running stream. The Middle Fork contains some meadows but to these are added a trio of lakes, most notably Toad Lake. Interestingly, Porcupine Lake has no outlet but springs far below the lake indicate some underground flow of water. In contrast to the previous two branches of the Sacramento, the South Fork has a large collection of lakes and meadows, forming the most varied and expansive headwaters. All three forks flow through rugged canyons before joining together and forming the main stem of the Sacramento River. All three forks have interesting hiking to offer, but it is the South Fork that will draw the most interest due to its numerous trails and ease of accessibility.

The following are a collection of many of the trails and adventures possible around the headwaters of the Sacramento River: 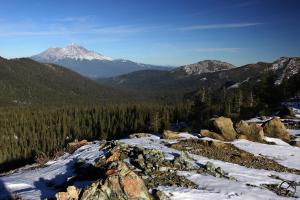 The most diverse and complex of the three forks, with the largest watershed, this area has many trails but also boasts a respectable amount of wild, rarely explored land. Indeed, a small portion of this watershed even falls within boundary of the Castle Crags Wilderness.  Forest Road 26, often referred to as South Fork Road, climbs through the canyon and passes beyond it into Trinity County. All of the trails around the South Fork are accessed via this road, though some require further driving on dirt roads. Further thoughts on the headwaters can be found here and here. 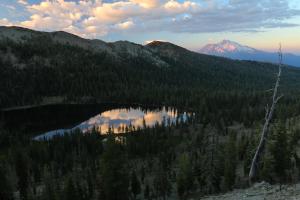 Toad Lake lies at the head of the Middle Fork.

There are not too many trails around the Middle Fork. With no roads or trails along the river, it is remote and often hidden away deep in its canyon. However, the Pacific Crest Trail provides great access to Porcupine and Toad Lakes, as well as numerous springs that contribute their water to the river. A bumpy dirt road does climb through the canyon to Toad Lake and makes a very interesting drive. From the end of the road it is possible to hike the Toad Lake Trail to the old campground by the lake and then continue on a short distance to the PCT and destinations beyond.

Porcupine and Toad Lakes Via the PCT 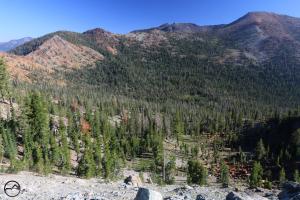 The headwaters of the North Fork are the most remote of the three branches of the Sacramento. There are no lakes like the other two forks of the river. Instead, the northernmost branch emerges from a large complex of meadows that lie at the head of “Foxtail Basin”, a high elevation bowl below Mount Eddy. With no roads leading to it, access is only on foot via the Sisson-Callahan Trail. This historic path was once the main route from Mount Shasta to the small hamlet of Callahan, where the mid-19th century’s main stagecoach line once passed through. Though other remnants of the trail exist, the section running along the entire length of the North Fork of the Sacramento is the most interesting and in the best shape. For those willing to make the long hike, an exciting, beautiful journey awaits. More thoughts on it can be found here.

There are a couple of other great ways to explore the headwaters of the Sacramento River. The first is the awesome loop around all three forks of the river that I have proposed before. A multi-day backpacking trip, this journey would pass through spectacular mountain terrain and yield amazing views of Mount Shasta and the Trinity Alps. The other great way to enjoy the river is by hopping the rocks at the confluence of the forks. The first to meet is the South and Middle Forks, though this area is a little tougher to access. A little further downstream, there are some great swimming holes and then the river’s plain widens out and is covered by a large boulder field. The area around the confluence of the main stem and North Fork is perfect for families to enjoy a day with the cool, rushing water and large, technicolor rocks. Not far from here, the river is impounded to form Lake Siskiyou and then begins its headlong journey to the Pacific Ocean. 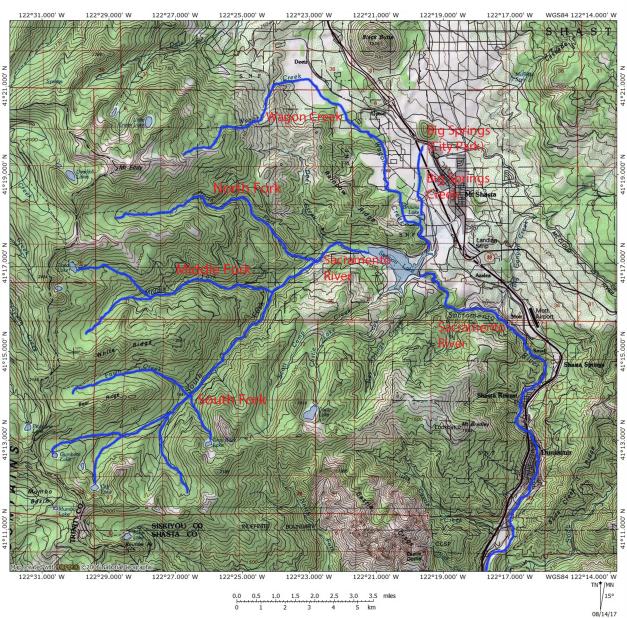 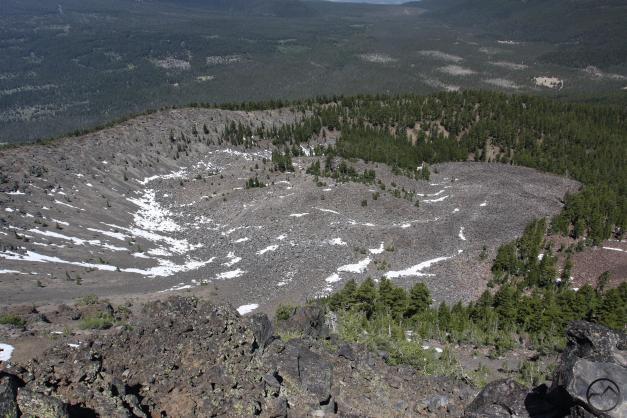 Ash Creek Butte is one of the most scenic and geologically fascinating mountains in the Mount Shasta area. It is tall, has a beautiful, rugged appearance, and boasts fantastic views. Like most of the California Cascades that lie east of Mount Shasta, Ash Creek Butte is draped in a cloak of anonymity that keeps it off the radar of most hikers. Nonetheless, the peak is one of the highlights of the block of mountains on the remote, eastern side of Mount Shasta. This area is definitely one of the more attractive portions of the California Cascades, complete with vast meadows, rushing mountain creeks, hidden lakes and old forests. While sharing many of these qualities, Ash Creek Butte boasts some unusual geology that sets it apart from the other mountains around it. The geologic centerpiece of Ash Creek Butte is the Ash Creek Butte rock glacier. Even though this formation lacks notoriety, it is unusual and scenic enough to have been designated the Ash Creek Butte Fossil Rock Glacier Geologic Area. Though seldom seen, it deserves far more attention than it gets. 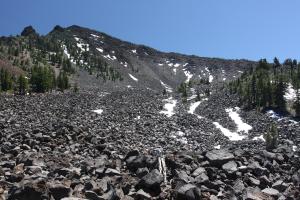 Rock glaciers are unusual geologic phenomena. In many cases, they consist of actual glacier composed of ice but have been completely or partially overlain by a layer of rock debris. The lowest section of Mount Shasta’s giant Whitney Glacier is one example of this. However, the Whitney Glacier is not a rock glacier, since the preponderance of the ice is uncovered by rock and exposed. Most rock glaciers containing ice are completely covered with rock and the ice is not visible at all. The other kind of rock glaciers is actually the remnants of past glaciers. The ice has long since melted out but the rocky debris carved out of the mountain by the glacier remains. Amazingly, the ancient glacier’s flow pattern is usually visible in the rock pile. Streams of rock, lobes, layers and other evidence of movement are often visible, especially when viewed from above. Fossil rock glaciers also boast other features typical of live glaciers, including moraines and lakes. It is because of the evidence of motion, of the glacier’s “life” that these types of rock glaciers are sometimes referred to as fossil rock glaciers. 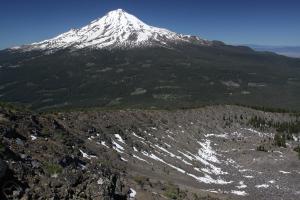 There are actually two large rock glaciers on Ash Creek Butte. One lies on the east side of the mountain while the main rock glacier is found in a large basin on the north side. The latter is preserved in the Klamath National Forest’s Ash Creek Butte Fossil Rock Glacier Geologic Area. It covers a surprisingly vast area, surrounded by tall, scree-covered craggy cliffs. Scrambling through the expansive talus is reminiscent of the journey through the infamous boulder field at Long’s Peak in Colorado. From afar, Ash Creek Butte seems like a volcanic peak similar to the many volcanos that surround it. Several nearby peaks like the Whaleback and Goosenest have craters on their summits. It is easy to mistake the rock glacier as evidence of a past, massive eruption since the cirque that contains it has the appearance of a crater. However, this is not the case. The “crater” was actually scoured out of the mountain by the ancient glacier, leaving the giant cup on the side of the mountain. Ash Creek Butte, alone among all the Cascade peaks in the Mount Shasta area save only the great mountain itself, has experienced glaciation. It is uncertain why it is alone in this regard, but perhaps its proximity to Mount Shasta and southerly distance from the mountain’s rainshadow created the conditions for the glaciers to form. 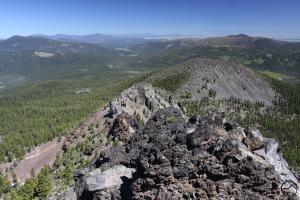 Looking at the large hoodoo from the summit.

It should be noted that saying the mountain lacks a crater is not saying that Ash Creek Butte is not volcanic. Evidence of past volcanism abounds. The most obvious indicator is the composition of the rock in the fossil rock glacier. Composed of gray and red andesite and dacite, it has a similar composition to Mount Shasta. Basalt and tephra, other types of volcanic rocks, are also present higher up on Ash Creek Butte. Even more interesting is the presence of a large hoodoo on a ridge below the summit. While there does not seem to be much history of eruptive activity (assuming the glacier did not carve it off the mountain) this hoodoo is evidence of past volcanism. Whether it was just a vent or was the main volcanic neck is uncertain. Nonetheless, it remains a reminder that fire shaped Ash Creek Butte, just as ice has. 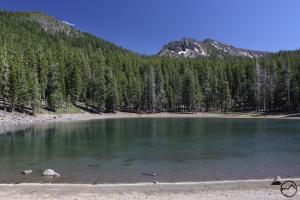 Another interesting feature of the rock glacier is the presence of lakes. Ash Creek Butte claims two and it is surprising that they are not more popular destinations for hikers. In geologic terms, the most interesting is the tiny lake at the foot of the glacier. It is common to see lakes form at the point where glaciers terminate and though this lake is tiny, it is more evidence that ice once flowed like a river from the summit of Ash Creek Butte. Lacking a name, I have dubbed this small tarn Fossil Lake. Though it is small, it is unusually deep and makes a good place for a swim. The water is located right at the foot of the glacier and the rocky debris rises 50 or so feet high above the water. It is a lovely spot. The other body of water on Ash Creek Butte is beautiful Surprise Lake. Further down the basin from the glacier, it indicated how far the ice once extended. No trails lead to Surprise Lake but it is easy to get to. With sandy beaches, turquoise water and the rugged summit of Ash Creek Butte looming overhead, it is a wonderful place to relax and enjoy the deep isolation this area offers.

The Ash Creek Butte Fossil Rock Glacier Geologic Area is remote and off the radar, but it remains one of the Mount Shasta area’s more scenic and interesting features. It may be seldom seen, but it is worth the effort to explore it.

Looking down on the eastern rock glacier.

Fossil Lake, at the foot of the glacier