A pleasant walk in the woods that leads to Root Creek Falls, an exceptional waterfall in the awesome Castle Crags. 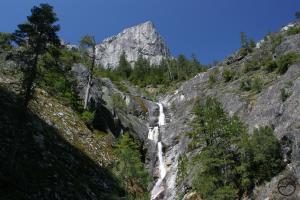 The Root Creek Trail is bit of a split personality. Most of the trail is a moderately climbing pathway that passes through essentially viewless, dense forest cover. The second half portion of the trail parallels Root Creek, first as an official trail then soon giving way to an unofficial use trail. Eventually the use trail arrives at a precarious but spectacular vista. Multi-tiered Root Creek Falls pours gracefully through a narrow granite gorge. High above, the gray spire of Castle Dome floats overhead. Its sheer east face is an imposing presence above the falls. All in all, it is a scene one would expect to see in Yosemite or other grand places in the Sierra Nevada. For all of the magnificence of the sight, it is not well known, but deserves an iconic status. At the very least, it is an exceptional payoff for a fairly mundane trail. The falls are best seen during the spring runoff. This is convenient, since the trail is lower elevation and best done when trails in the high country are still covered in snow.

There are two options to reach Root Creek. One option is to begin at the Castle Dome Trail. This route is both shorter and has less elevation gain. Unfortunately, this trailhead requires an entry fee. Consequently, this trail description will begin at the Pacific Crest Trail trailhead at the Soda Creek exit on Interstate 5. 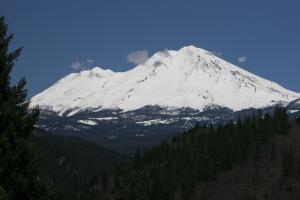 View of Mount Shasta from the PCT.

From the trailhead, which only 50 yards or so away from I-5, the trail, which is the Pacific Crest Trail, immediately enters the woods and begins climbing. At this point the trail is resuming a normal, foot trail after the PCT crossed over the Sacramento River on a road bridge. The trail initially travels south for 0.35 miles before turning west and climbing in earnest up into the woods that blanket the feet of the Castle Crags. While there are no views of the Crags to speak of, there is an opportunity to catch a good view of Mount Shasta early on in the hike. When the trail makes its turn to the west, there is a small user trail that continues to the south a short distance. As the forest clears, I-5 can be heard and occasional one can catch glimpses of it. Off to the north Mount Shasta soars aloft, dominating the horizon. Back on the PCT, the trail maintains a steady westward orientation climbing moderately through the forest for about 1.2 miles. Eventually the trail makes a broad switchback just prior to a junction with the Root Creek Trail proper. The lower half of the switchback passes through a clearing beneath a powerline. 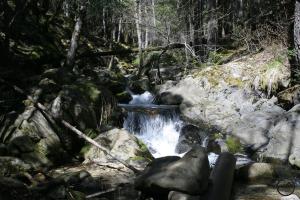 Once at the junction with the Castle Dome Trail, the Pacific Crest Trail proceeds south a short distance and then west before joining up with the Castle Dome Trail. Staying on the Root Creek Trail, the pathway remains under dense forest cover. Recent work has been done to make this trail ADA (Americans with Disabilities Act) compliant. It is a wide path and retains its moderate grade. Notice the narrow gullies alongside sections of the trail. This was an old mining aqueduct. After about 0.35 miles, the sound of Root Creek becomes audible. The slope on the right side of the trail becomes steeper, falling away into Root Creek’s increasingly narrow canyon. Another 0.3 miles finally brings the trail to the banks of Root Creek. The creek crashes over granite rocks as it heads towards its confluence with the Sacramento River. Large rusty pipes protrude from the creek and its banks. These were installed to divert water to the aforementioned aqueducts for mining operations. In fact, the length of the Root Creek Trail is remnants of the access trail to this water supply. 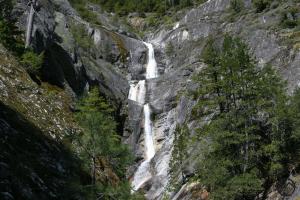 To see Root Creek Falls, stay on the south side of the Creek. Climb up above the high embankment above the point where the trail meets the creek. That is the end of the official trail. From this point on, the route is a use trail made by people visiting the vista point that looks on the falls. The path is very faint but it parallels the creek. If you lose the trail, just maintain a cross-country course above Root Creek. As one approaches the falls, the trail should become more obvious as the canyon narrows. Eventually the use trail reaches a point where the falls and Castle Dome are visible. It is a bit precarious and there is not much room, but the view is amazing and worth the effort. For those who want a challenge and with to climb higher, it is possible to look down into Root Creek Falls’ narrow gorge from points higher up and see the hot tub sized pools between the falls’ tiers. 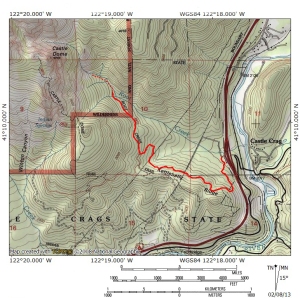 Traveling on Interstate 5, take the Soda Creek exit. Go to the west side of the freeway and park at the Pacific Crest Trial trailhead. The trailhead is only yards from the southbound freeway exit.