Rapids on the Sacramento River.

The upper Sacramento River begins high in the Trinity Divide, west of magnificent Mount Shasta.  The river is impounded to form Lake Siskiyou shortly after the three headwaters forks, the South, Middle and North Forks, converge. Over 30 miles downstream from the lake the river’s energy is again stilled at massive Shasta Lake. Between these two reservoirs, the Sacramento, California’s longest river, is a boisterous, wild waterway. It flows through rocky gorges and over rapids, offering a significant amount of whitewater. While the river is understandably popular with rafters and kayakers, it is less of a draw with hikers, primarily because of the lack of developed trails. The best opportunity to experience the inter-lake section of the river is along Castle Crags State Park’s Sacramento River Trail. This trail has somehow managed to stay off of the radar. It is used primarily by local residents. Nonetheless, it is a very scenic path. It is never out of sight or sound of the Sacramento. The trail offers numerous chances to climb down to the river and observe its glorious whitewater, interesting bedrock and some small, rocky beaches. Still, the main attraction remains the river itself and the Sacramento does not disappoint.

Suspension bridge over the Sacramento.

The Sacramento River Trail begins inauspiciously at a large pullout on the side of Frontage Road at the north end of Castella. Just up the road is a tunnel that passes under Interstate 5, connecting the trailhead to the Castle Crags State Park. The trail itself immediately dives into the forest, passing through oak, ponderosa pine and cedar. Very soon, the path drops down some short switchbacks and passes through a small, narrow tunnel beneath the railroad tracks. Beyond the train tracks, the trail reenters the woods for another short stint before finally encountering the Sacramento River. To allow access to the far side of the river, a swinging suspension bridge has been constructed. From the bridge, there are good views up and downstream. Beyond the bridge, there is an attractive picnic area with tables overlooking the river. The picnic area is accessible via a road that parallels the trail for the duration of the hike. Fortunately, the road is situated well away from the trail and is lightly traveled, meaning that it barely intrudes on the natural setting.

Alongside the Sacramento River.

Once across the river, the trail begins in earnest. Heading upstream to the east, the trail is nearly level, with only gradual ups and downs. The Sacramento is about 40 feet below the trail at this point and fairly wide. Thick wooden planks are used periodically to cross small, spring-fed streams. Through the trees, there are glimpses of the Castle Crags high above the river. The Grey Rocks also make brief appearances as well. The river maintains a wide course along this section of the trail, which is heavily forested. Among the numerous species of trees are yew and Port Orford cedars, two rare types of trees. Yews have needles similar to fir trees and red, peeling bark similar to that found on a madrone. Port Orford cedars, which are actually cypress rather than cedar trees, are endemic to the Klamath Mountains in northern California and southern Oregon. About 0.65 miles from the bridge the trail crosses a bridge over a large but unnamed creek. A noticeable side trail heads away from the river to the road. 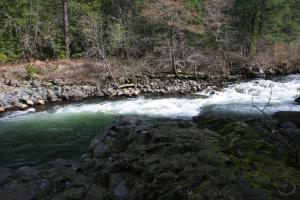 The river races through a bedrock slot.

Shortly after the bridge, the Sacramento River Trail drops down to river level. Here the river narrows considerably as it roars through a gorge cut through the exposed bedrock. This marks a change in the river’s personality. Up to this point it has been wide and though it is swift moving, it has few significant rapids. Now, with significant exposed bedrock, the Sacramento consists of a long litany of whitewater cataracts and rapids. There are several nice pools created by the bedrock that make great swimming holes. As the trail proceeds along the narrow river, the valley through which the river passes widens. Here there are some very pleasant walk-in campsites operated by Castle Crags State Park. The sites have bear boxes, picnic tables and fire pits, as well as vault toilets. These sites are adjacent to the river and very lightly used. They are a very well-kept secret. 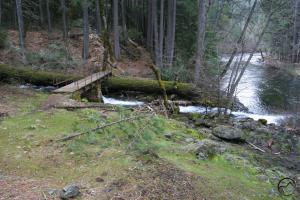 Confluence of Fall Creek and the Sacramento.

Past the campsites, the river’s valley narrows again, though the trail stays at or near the river. There are more rapids and exposed bedrock. Soon the path reaches another bridge over a tributary of Sacramento River. This is Fall Creek which begins high up on Girard Ridge to the east. The Pacific Crest Trail crosses the headwaters of the creek. The area where the Sacramento and Fall Creek meet is possibly the prettiest of the entire hike. A massive, fallen ponderosa lines the side of the creek, diverting the waters toward a final series of cataracts as it falls into the river. The bridge that crosses the creek is built onto the fallen tree and a stone masonry pier. On the far side of the creek there is a small grassy area along the trail. Below this is large bedrock beach by the river. It is an attractive area with scenic places to sit and enjoy both the creek and the river.

Columnar basalt at the end of the trail.

After Fall Creek, the trail presses on for another 0.3 miles. The Sacramento widens a bit and goes over a few wide, low rapids. Near the end of the trail, large chunks of columnar basalt poke out of the sediment beside the trail. Finally, the trail enters another wide area along the trail and turns, for the first time, directly toward the river. The path peters out at a fallen tree beyond which is a rocky area next to the river itself. Continuing onto the rocky area reveals a large, stone retaining wall across the river, evidence of a bridge that once crossed the Sacramento here. Though this marks the end of the trail, there one more point of interest that demands to be explored. Backtracking on the trail a few yards, there are increasingly faint use trails that climb up to a bench perched beneath a long wall composed of columnar basalt. The basalt blocks are about 20 feet high. A couple of fallen trees have made travel a bit more difficult along the wall but the flowers, lichen, seeps and vines all add interest to the basalt. Once the area has been explored, return to the trailhead on the Sacramento River Trail. 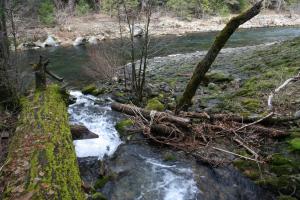 Fall Creek and the Sacramento.

On Interstate 5, take the Castella exit. Head east toward the river. Turn left onto Frontage Road. Proceed 0.6 miles to a wide pull off along the road. There is a small sign marking the beginning of the trail. It is also possible to park at Castle Crags State Park and follow a path that passes through a tunnel beneath the freeway.