An epic view of New Coquette Falls and Mount Shasta.

I am not sure how it happened, but somehow 2020 became the year of the seldom seen waterfall. At least this was the case in where and to what I was using my hiking time to explore. The Mount Shasta area certainly has its share of waterfalls, but it is surprising how many great waterfalls are completely overlooked or totally lost in the community consciousness. While this is not a bad thing necessarily, since it keeps some of these waterfalls wild, it remains surprising to me nonetheless. I am not sure at what point it happened, but tracking them down became an object of focus this year for a myself and a friend of mine. It proved to be an excellent goal this year, giving us an opportunity to spend time outside and explore some little appreciated areas, especially during the crazy virus summer when Mount Shasta received unprecedented visitation. Shockingly, despite reaching so many waterfalls and cascades, we left several still on the table. These will be the subject of exploration next year!

For now, I want to document the gems thus far discovered. Some of them are small and serene while other are massive and powerful. It stands as a testimony to the diversity and beauty of Mount Shasta and the surrounding area. More beckons to be explored.

The first waterfall I hit this year is one of my favorites. An old favorite, it wasn’t a new discovery but it was new for my kids, who really enjoyed the pool at the fall’s precipice.

Not too far upstream is another nice cataract. Roughly 30 feet in height, it is located in a beautiful granite grotto. There is more to explore upstream, but this one makes a nice turnaround point for a short but gorgeous hike.

This one is pretty remote, though not far from Mount Shasta as the crow flies. It is on the west side of the China Mountain area. There was a surprising amount of fascinating history on the way to this one.

Another view of the same waterfall. It is certainly one of the taller waterfalls in the area. A few on Mount Shasta and Burstarse Falls in the Castle Crags are taller, but this one still ranks in terms of height.

These cataracts in the Scott Mountains are gone by midsummer but during late spring/early summer they are powerful and exquisite. Great views of Mount Eddy and Mount Shasta abound!

Another nice set of cataracts further up the same creek. Just beyond is small but idyllic “Survey Meadow”. Not many make it out to this area.

“Terrace Falls” is a beautiful series of cascades surrounded by large Port Orford Cedars. This is on the inlet to a popular lake, but it rarely gets the due that it ought. When flowing, it is a serene spot.

This one is on a creek that is “a canyon too far”, nearly adjacent to popular destinations. About 15 feet high, it pours off a slick rock precipice and immediately slams into a huge boulder. Getting here requires some work and the willingness to descend a steep, loose washout.

Just upstream from the previous falls, this is one of the Mount Shasta area’s best waterfalls, though it is almost totally unknown. Sheer and powerful, the water hurtles itself over the edge. People would be shocked how close this waterfall is but how utterly forgotten it remains.

One of my favorites of the summer, this is on a large, well-known creek but on a stretch that is rarely explored. The water shoots through a natural cement trough and then fans out in a wide cascade. The section of this creek, both upstream and downstream from the falls is one of the prettiest in the area.

This cascade is at the headwaters of the Trinity River, just below a gorgeous meadow. The entire creek is beautiful but this section, where the water races down a narrow chute is quite beautiful.

Immediately downstream from the previous cascade, this little cataract is another small but beautiful bit of falling water. This whole area is very unappreciated but quite beautiful.

Another view of New Coquette Falls, putting it into perspective with Mount Shasta behind. It is one of the best views of the mountain.

All in all, this was a fine collection of falling water, with more to come next year, Lord willing. It is humbling and exciting to consider how much beauty remains a mystery here in Mount Shasta. There is much to explore, much to return to and appreciate anew. 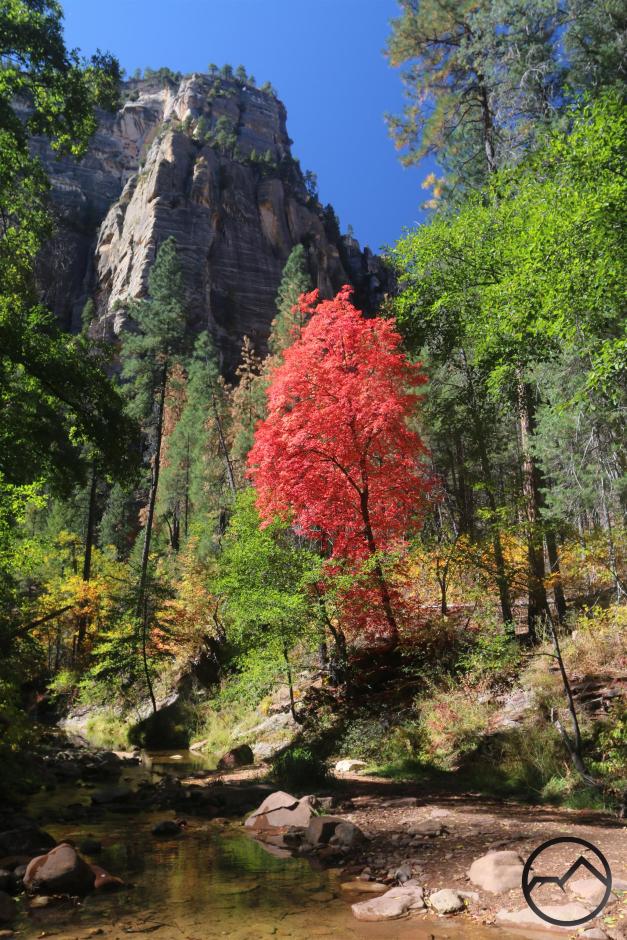 A maple highlights the fall color along the West Fork of Oak Creek.

My wife and I have always enjoyed an autumn trip to close out the summer season. For us it has marked the end of the prime hiking season and ushered in the colder, wetter weather of late fall and winter. Typically we have gone to the eastern Sierra Nevada for these trips but this year we decided to get a little more ambitious and head down to Arizona. Our kids are old enough to really appreciate the different environment and we always want to expose them to new parts of the world and different ways of life. This seemed like a perfect time to head down to the desert, which the kids have had very little exposure to.

It was a grand trip, hitting Death Valley, the Grand Canyon, various destinations around Flagstaff, Sedona and the Sonoran Desert before heading over to Los Angeles for a quick taste of Southern California (to our kids, “southern California” has always meant San Francisco, or possibly Carmel. Little did they understand there is a lot of California further south from there!). Everything was met with a new wave of awe or enthusiasm, as they explored one new, spectacular landscape after another. In the end, the surprise stand out for them was the Sonoran Desert, which we experienced with a great campsite at Lost Dutchman State Park in the Superstition Mountains. The requests are already in for a return to the desert next year. We shall see…

For myself, it was great to get back to the southwest. California will always be my home by the southwest will always claim a significant part of my heart. I feel refreshed from our time there and ready to take on winter. Bring on the weather!

Zabriskie Point. Not exactly U2’s pose, but they were trying.

A maze of canyons. 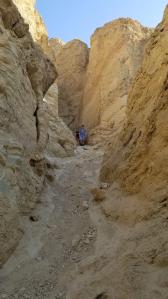 Exploring deeper in the maze. 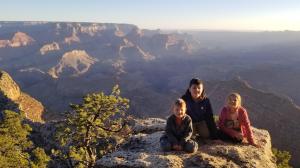 First morning at the Grand Canyon. 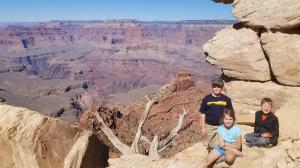 Hiking down below the rim. 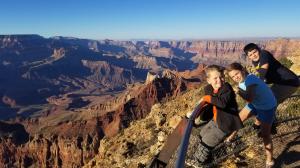 Sunset exploration on the rim.

Are there better conditions for scrambling?

First exposure to prehistory at Wupatki. 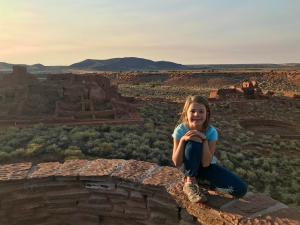 Autumn in the Inner Basin.

Some serious scrambling in Sedona. 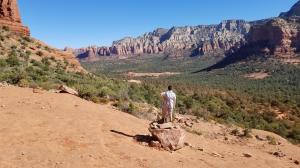 Awesome red and white sandstone view from the Twin Buttes.

We had the best campsite in Sedona, including our own private part of Oak Creek.

Fall color in our campsite.

Idyll in the canyon… 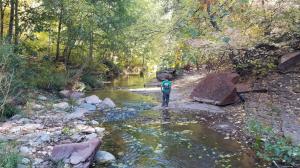 While the hordes stuck to the trail, we did an excellent boonie stomp up the creek.

Sandstone “hammers of the gods” in a remote section of canyon.

A false kiva, but very cool. 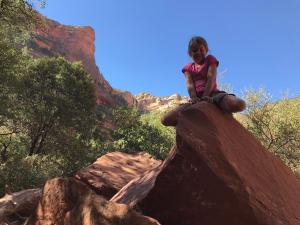 Learning a hard lesson about the desert.

Exploring the cacti at sunrise.

The first warm water beach for these kids. 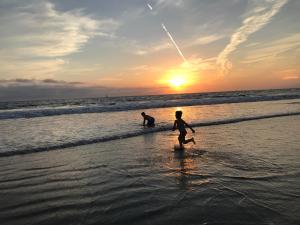 Not a bad end to the trip.