A swift and steep trail that climbs high above treeline on a ridge with fantastic views. A cross-country scramble leads to the summit of Green Butte, the highest of Mount Shasta’s color themed buttes. 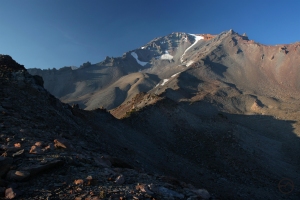 Of all the major trails on Mount Shasta, the Green Butte Ridge Trail is probably the most obscure. Why would such a scenic trail beginning at the mountain’s busiest trailhead remain almost a complete mystery? The reasons for the trail’s anonymity are almost as numerous as the reasons one should hike the trail. First an examination of the reasons for obscurity. Perhaps the most potent discouragement for the Green Butte Ridge Trail’s notoriety is the fact that it is a relentlessly steep trail. After a short, pleasant amble through the woods above the Bunny Flat Trailhead, the Green Butte Trail goes vertical, climbing 2,200 feet in less than two miles. That alone would discourage many but the fact that a longer and somewhat easier route that goes to Horse Camp and then climbs up Green Butte Ridge exists tends to drive people to the more popular Horse Camp Trail. In addition, the actual trail does not reach a particular destination. Instead it peters out while climbing Green Butte Ridge. To reach the destinations, either the summit of Green Butte or Point 9,365, one must scramble up 600 feet of scree. Lastly, the Green Butte Ridge Trail is not actually recognized as a trail by the Forest Service. Consequently, it is neither maintained nor advertised by the agency and does not appear on any maps. One simply has to know it is there. 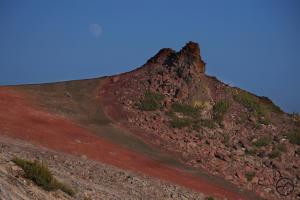 However, taking these negatives into account, there are still many reasons to climb the Green Butte Ridge Trail. Perhaps the foremost reason to undertake the endeavor is the fantastic views from Green Butte, and in particular, Point 9,365. No other trail on Mount Shasta gets to such remote and elevated scenery so swiftly. The vista from Point 9,365 is astounding. Situated on the knife-edged crest of Green Butte Ridge, two massive canyons flank the point. The Old Ski Bowl and Avalanche Gulch fall away on both sides and high atop the two bowls sits the summit of Mount Shasta. Far below, the sound of a hidden stream in Avalanche Gulch is distinguishable from the wind that constantly blows at this vantage. From this point, one can either climb (descend to, actually) Green Butte or continue along Green Butte Ridge to the mountain’s summit (this is more accurately a winter route). In addition to views, opportunities for solitude abound on this trail, something far harder to find on the other trails that originate on the Everitt Memorial Highway.

While the Green Butte Ridge Trail is not the ideal trail on Mount Shasta, it is a great introduction to the terrain above the treeline. Of course, one pays for this with a short, steep ascent but the resulting views are some of the most expansive views of the south side of Mount Shasta that can be reached from a trail. If ambition and energy are in abundance but time is short, the Green Butte Ridge Trail is an optimal choice. 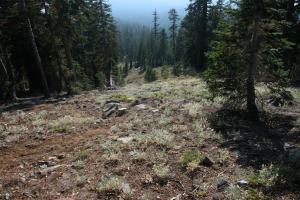 The second steep climb on the Green Butte Trail.

Bunny Flat is the trailhead for the Avalanche Gulch route up Mount Shasta. With the possible exception of the Old Ski Bowl area (which includes Panther Meadows), Bunny Flat is the busiest trailhead on Mount Shasta. While almost all the traffic at the trailhead either heads up to Horse Camp or stays at the trailhead enjoying the views of both Mount Shasta and the southernmost expanse of the Cascades down to Lassen, the Green Butte Ridge Trail is overlooked and instantly wild the moment one leaves the clearing of Bunny Flat. While one can start on the Horse Camp Trail at the signed trailhead, it is preferable to climb up one of the trails that go from the parking area to a prominently placed bench that has a great view of the mountain. From here there is a trail that passes through the treeless clearing of Bunny Flat, heading north. At the far end of the clearing there is an obvious junction where turning left will put one on the trail to Horse Camp. Stay to the right and the trail quickly leaves the clearing and enters the woods, which is the proper beginning of the Green Butte Ridge Trail. 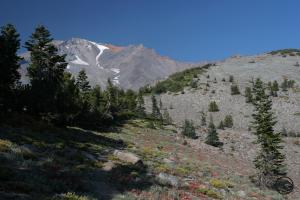 The first view of Mount Shasta from the Green Butte Trail.

The trail begins at a very comfortable grade. It first heads east, then makes a single, sharp switchback to the west. The trail stays fairly level a little longer. After about 0.75 miles from the trailhead, it suddenly makes a steep ascent up the ridge that divides Bunny Flat from the lower reaches of Avalanche Gulch. Although the trail has been completely obvious and well graded up to this point the unofficial nature of the route is made evident at this point. Rather than a steep trail or a switchbacked trail, there are multiple scramble routes worn into the side of the ridge. Two main routes run parallel and of the two, the one on the left is better, in part because it makes use of fallen trees to keep the trail from wearing away. Once the steep ascent is over, the trail still climbs at a grade much steeper than the initial part of the route. A short distance away a blue sign high in a tree (so as to still be visible in the deep snow, since this is also used as a winter route) marks entry into Sierra Club property. This is the heart of the land that Horse Camp is found on. Once on Sierra Club land, the trails climbs a little further and then comes to the foot of another steep climb. Again, the route is clear if not well maintained. Near the top, lupine and other alpine plants hint at the change in terrain that waits at the top of the ascent. As one reaches the top, finally on Green Butte Ridge proper, the trees suddenly give way and an open alpine expanse unfolds beyond the trail. Lofty Mount Shasta holds sway in the distance and the summit pinnacle of Green Butte thrusts upward to the east. Here, soil as well as trees gives way and the terrain is now composed of loose scree, seemingly climbing all the way to the summit of Mount Shasta. A profusion of lupine and rabbitbrush emerges from the scree. The shift in terrain is as sudden as it is dramatic. 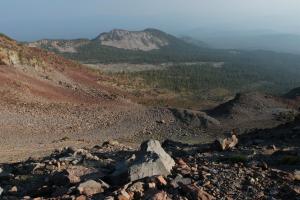 Once in the open, the trail becomes more defined. It stays near the top of the ridge, following its contour north then turning east. Before reaching the top of the ridge the trees, mostly Shasta Red Fir, were all large and old. The top of the ridge, being more exposed to the elements, hosts the old trees stunted brethren. The small trees cling precariously to the crest of the ridge, forming a green band coursing to the east. The Green Butte Ridge Trail follows these trees closely. After a short level section that commenced at the top of the ridge, the trail again begins to climb. The destination is an obvious false summit composed of gray scree and capped by a small cluster of krummholtz trees. As the trail climbs steeply it begins to grow more indistinct, finally fading away for the last time at the top of the false summit. If one clings to the southern edge of the ridge there is an opportunity to peer down into Sun Bowl, one of two popular backcountry skiing areas between Bunny Flat and Green Butte. Once on top of the false summit there is a short level area and then another steep climb, this time to the trail’s zenith on Point 9,365. The rock in this area changes from a flat gray color to a distinctive reddish hue. By staying to the south, one can again peer down into the other backcountry ski bowl, this time the immense Powder Bowl, which seems to be twice the size of companion Sun Bowl to the west. From this vantage, cut back to the north, traversing the final, steep scree field below Point 9,365. On the point, there are fantastic views of Mount Shasta, Avalanche Gulch, Shastina, the Old Ski Bowl, Sargents Ridge, Thumb Rock, Shastarama Point, and Green Butte. To the west, across the Strawberry Valley rises Mount Eddy and the high peaks of the Trinity Divide. Beyond the divide are arrayed the dragon’s teeth of the Trinity Alps. 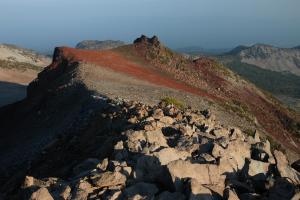 Looking down on Green Butte.

Reaching the top of Green Butte is a simple matter from here. Simply cross a short, shallow saddle to another point. From here a narrow neck descends down to the summit plateau of Green Butte. The neck, dividing Powder Bowl and the Old Ski Bowl, is narrow but does not present much serious danger as long as one proceeds with caution. From the base of the neck, it is a short, level hike to the base of Green Butte’s summit pinnacle. Fulgerites, testimony of the many lightning strikes to have hit Green Butte, are found in this area. 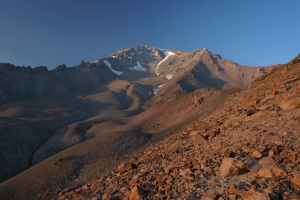 Sunset on Mount Shasta, as seen from Green Butte Ridge.

A loop of sorts can be made by connecting the Green Butte Ridge Trail with the Horse Camp Trail. This would make for a fuller day’s hiking and offers great views and variety. Although the loop is better done by beginning on the Horsecamp Trail and returning via Green Butte Ridge, a very short description of how to connect the trails beginning on the ridge is worth mentioning. At the end of the second steep climb, where the terrain finally shifts to a more alpine, krummholtz environment, the trail continues north at a level grade for a short distance. Once the trail turns to the east and begins to climb look beyond the band of trees the top the ridge. As one looks down into Avalanche Gulch, an obvious bench between the top of the ridge and the bottom of the Gulch is apparent. Descend to the bench and then the rest of the way down to the gulch. A narrow gully is Avalanche Gulch proper. On the north side of the gully an obvious use trail can be picked up. This leads back to Horse Camp and thence to Bunny Flat. 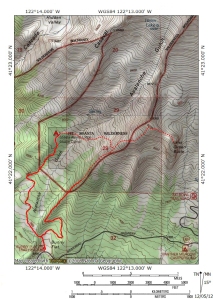