A diverse hike to two lake basins and the summit of one of the Trinity Alps’ most rugged peaks.

Glaciers Gave This One 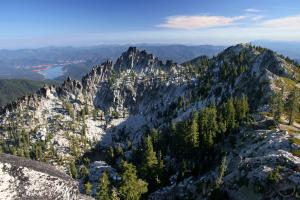 In mountainous regions geography dictates transportation lines. In Northern California, most who make journeys into the Trinity Alps pass through the old gold mining community of Weaverville. The quaint community is filled with historic buildings and a refreshing creek but it offers little in the way of views of the magnificent Trinities. Only three major peaks, Monument Peak, Red Mountain and Granite Peak, can be observed from town and none present their most impressive profile for travelers to inspect from town. Of the three, Monument Peak is the closest and most easily accessed from town. While the peak is not particularly inspiring from Weaverville, its north-facing side is a spectacularly rugged granite wall into which is gouged the sheer, stark Rush Creek Lakes basin. This magnificent cirque is only a few miles away from travelers far below but it is a world away from the busy community. Nonetheless, getting here is difficult and makes an outstanding day trip from Weaverville. This is accomplished via the relatively easy East Weaver Lake Trail. The trail leads from the Weaver Bally lookout tower over a ridge and down to small East Weaver Lake. From there the trail climbs up to a saddle between Weaver Bally and Monument Peak. An easy scramble along the saddle leads to the summit of Monument Peak and a chute that deposits the intrepid at the rocky shore of Upper Rush Creek Lake, the most beautiful of the three lakes. The other lakes are easily reached from the upper lake.

Monument Peak is one of the southernmost high peaks in the Trinity Alps. Only Weaver Bally (7,504), near the trailhead for Monument Peak, is further south. A large granite outlier of the massive Canyon Creek area, the core of the Trinity Alps, Monument Peak anchors the southern end of the Canyon Creek area. The mountain is not connected to this core area; instead it is separated from the granite heart of the range by a few ridges and saddles. Nonetheless, it demands inclusion with the Canyon Creek area since it towers high above the creek and is briefly visible from the road leading to the trailhead. Moreover, although the Rush Creek Lakes on the north side of the peak drain to the east, East Fork Lake (Monument Peaks other glacial cirque lake) is the source of the East Fork Creek which drains into Canyon Creek. 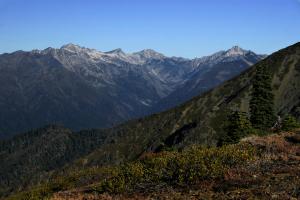 Canyon Creek from the beginning of the trail.

The trail begins around 6,900 feet, near the Weaver Bally lookout tower. If time is not limited, it is worth the effort to head up to the tower and its magnificent views, especially to the south where the Trinity River courses through its canyon and to the north, where Canyon Creek gapes like the jaws of a great beast. The trailhead is marked by a wilderness sign. It is not an elaborate trailhead but the path is easy to discern. Once it sets out to the north, the path traverses the south flank of the Weaver Bally ridge. After about 0.8 miles it reaches a shoulder of Weaver Bally. Monument Peak and East Weaver Lake come into view. Sawtooth Peak can be seen in the distance, presiding over Canyon Creek. To the east, much of the southernmost Cascades can be made out on the horizon, including Lassen Peak and Crater Peak. 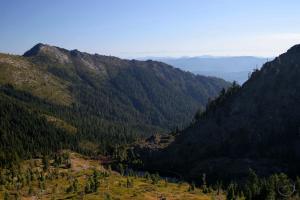 Looking down on East Weaver Lake.

From the shoulder of Weaver Bally the well maintained trail switchbacks down about 500 feet to the shore of tiny East Weaver Lake. The lake is the only reliable water to be found on the trip prior to arrival at Rush Creek Lakes. Campsites can be had near the lake. For those hiking with kids, the diminutive lake makes a fine destination. It is nestled into a rugged basin composed of metamorphic rock on the east side of Weaver Bally (one of the most underappreciated peaks in the Trinity Alps). Fine views across the headwaters of Rush Creek include Peak 7,053, a granite sub-peak of Monument Peak. Willow lines the lakes outlet. 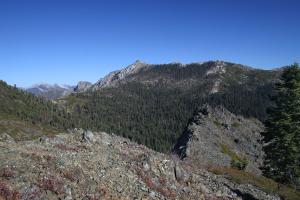 Monument Peak and Sawtooth Peak from the shoulder of Weaver Bally.

It should be noted that from the shoulder above East Weaver Lake and the saddle between Weaver Bally and Monument Peak there appears to be an easy traverse along the wall of the cirque. Every guide book vehemently urges hikers to refrain from attempting the traverse. The reason for this is the dense brush that covers parts of the wall. It may be dense but it seems like a route could be navigated. The other option is to follow the trail and lose and immediately gain back 500 feet. It is curious why trail engineers decided to drop the trail down to the lake and leave no other option for trips to Monument Peak. Obviously people will want to go to the lake, but it seems ridiculous to leave the lake as the only option. Prior to dropping down to East Weaver Lake it is possible to make out the entire route to the summit of Monument Peak. From here one can evaluate whether the bushwhack looks worth it or if the added descent and subsequent climb are worth avoiding the brush. 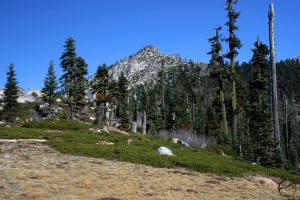 The summit of Monument Peak.

Beyond East Weaver Lake, the trail laterals across the basin forming the headwaters of East Weaver Creek. Aside from the lake, a series of springs feed the creek and water may be available a short distance from East Weaver Lake, though it may not be reliable later in the year. Unfortunately, the 500 feet lost descending down to the lake must now be regained. The objective of the climb is the saddle between the Weaver Bally Ridge and Monument Peak. The climb is steep, gaining 560 feet in 0.5 miles. The trail coming from the East Weaver campground joins the East Weaver trail just before the climbing starts. A few switchbacks ease the grade a bit and the climb is blessedly short. Once the saddle between Weaver Bally and Monument Peak is achieved, the official trail continues east, dropping into Bear Gulch and onwards to Canyon Creek. An unmaintained use trail leads along the crest of the saddle. Views are spectacular from here, especially to the west where one has a chance to observe the large Thurston Peaks, most impressive mountains of the western Trinities. The large granite dome that is the summit of Monument Peak looms on the far side of the saddle. There are numerous stumps and downed trees along the route, remnants of work by fire crews who prepared to set a backfire from the ridge during a 1989 wildfire. The fire was stopped before it reached the ridge, so the backfire was not necessary. The lack of canopy seems natural enough anyway, and it improves the view. 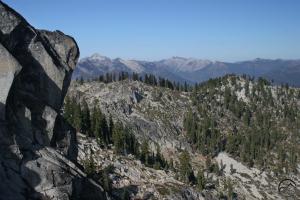 The Trinity Alps from just below the summit of Monument Peak.

Once the route reenters the trees it begins to climb in earnest. The use trail fades out at this point and it is necessary to go cross-country up the slope. The route is steep but easy to follow. Upon reaching the ridge, the views are spectacular. The stark granite of the north face of Monument Peak is a contrast to the wooded south face one just climbed up. In the Klamath Mountains, the south side is sun-blasted and wooded or barren while the north-facing side shelters craggy, sheer glacial cirques with a compliment of alpine lakes. Monument Peak stays true to this paradigm. To reach the summit, follow the ridge left a short distance to the base of the summit knob. It is an easy scramble up the boulders to the top. 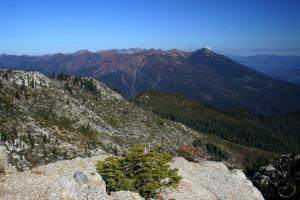 The Gibson Peak area of the Trinity Alps, Mount Shasta in the distance.

The views from the summit of Monument Peak may be amongst the best in northern California. From the top, the entire Trinity Alps spread out to the north. The Green Trinities can be seen to the west. The granite core of the Trinities, clustered around Canyon Creek seen close enough to grasp. Caribou Mountain, Black Mountain and the Stuart Fork of the Trinity River are also visible. The Red Trinities, including Siligo Peak, Seven-Up Peak, Gibson Peak, Red Mountain, the “Echo Peaks”, Middle Peak and Granite Peak are all visible. Above all of this, Mount Shasta presides regally. The Castle Crags and the Grey Rocks are visible adjacent to Shasta. To the east, Crater Peak, Lassen Peak, Mt. Diller and Brokeoff Mountain are visible. The northern Sierra Nevada can be seen as well. Shasta Bally, Bully Choop, North Yolla Bolly and the North Coast Range are all observed to the south. It is hard to imagine a more sublime view. 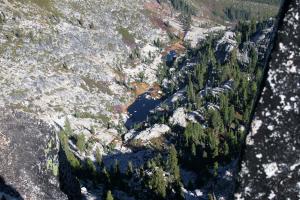 In order to reach the Rush Creek Lakes below the summit, head down one of the two obvious chutes, continually veering left (west). There is no trail along this stretch. It is a steep scramble but not too difficult for the experienced hiker. Upper Rush Creek Lake is easily the prettiest of the three lakes, boasting enormous cliffs topped by a serrated granite ridge high overhead. Shaded much of the day, the lake often boasts a compliment of snow deep into summer. It is an easy scramble down to the lower lakes, which are remarkably different from their upper sibling. Though they have rocky sections along their shores, they also have small meadows along their eastern fringes. A hot, boring trail climbs up to these lakes from the east. Skip it and head back the way you came. 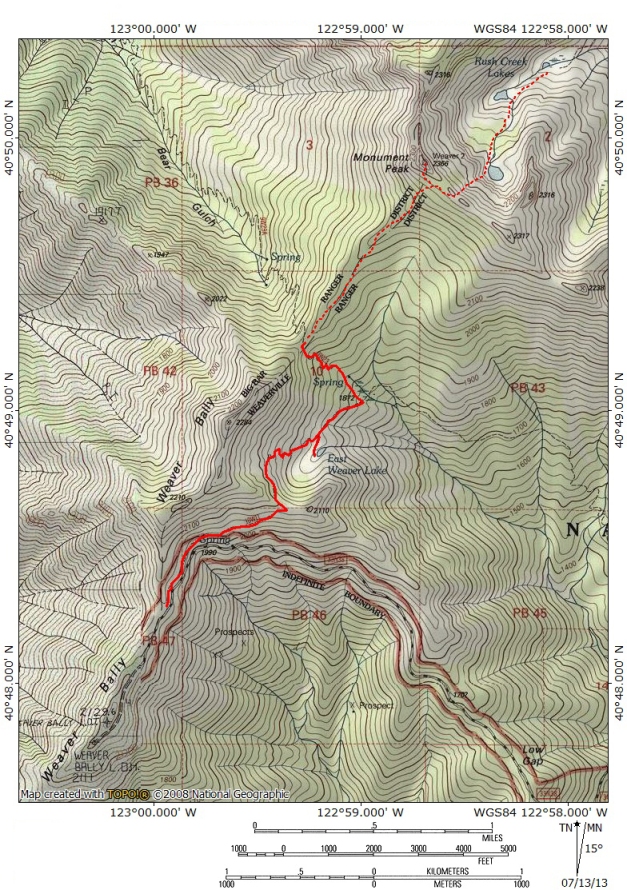 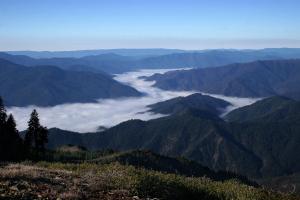 Foggy Trinity River canyon from near the trailhead.

From downtown Weaverville, drive west on Highway 299. Just before the end of town, turn right off the highway onto Black Bear Road. The pavement quickly disappears and Black Bear eventually becomes a lesser road that splits off the main route. The main road becomes Weaver Bally Road. There are signs pointing the way to Weaver Bally and stating the distance one must go. After 9 miles the road ends at a US Forest Service lookout tower, although the road is gated just before the tower. The trailhead is about a quarter miles before the gate. The trailhead sign has been knocked over and propped up against a tree so the trailhead may be heard to spot. Look for a yellow wilderness sign nailed to a tree to mark the trailhead. The path is easy to follow.