A short trail along the Sacramento River that includes interesting Depression era history, most notably an old bridge over the river.

History Along The River 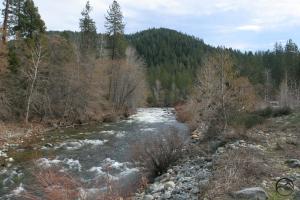 Looking towards the Sims Campground, along the Sacramento River.

The Sims History Trail is a short but scenic trail along the Sacramento River located between Lakehead and Castella. Although there are some unofficial fisherman paths along this stretch of the river, the Sims trail is the only official route. Despite being a short trail, it offers both attractive scenery and quite a bit of interesting history. The main natural attraction is the Sacramento River. The trail stays close to the river for most of its length. There is also a rough use trail that extends beyond the main trail and follows the river to the mouth of a small rocky gorge and the confluence with a large creek. Unlike most trails in the Mount Shasta area (the Ney Springs Canyon Trail being a significant exception), the Sims History Trail offers several opportunities to observe remnants of the area’s early 20th century history. This includes the ruins of an old sawmill and barracks from a depression era CCC camp. Most notable, however, is the bridge over the Sacramento River constructed by the CCC. With the exception of the unmaintained trail that follows the river, the entirety of the Sims History Trail is next to the Sims Campground, which is operated by the Shasta-Trinity National Forest. 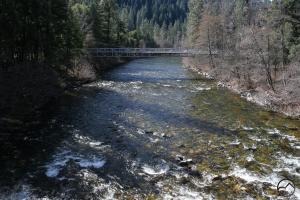 The historic bridge over the Sacramento River.

Though far shorter than most trails in the Mount Shasta region, the Sims History Trail is a scenic and interesting diversion from the hour long drive between Redding and Mount Shasta. As noted, it is the only trail along the river between Lakehead and Castella. When leaving I-5 and driving to the trailhead, the old CCC bridge can be seen while crossing a new concrete bridge over the Sacramento. Mount Shasta looms high overhead, 25 miles to the north. The trail passes along the outskirts of the Sims Campground so this means that trailhead parking is right next to the campground entrance. The trail begins immediately adjacent to the east side of the old bridge. This is probably the single most fascinating point of interest on the trail. The bridge is a suspension bridge and is constructed of old steel girders with a wooden deck. It was built to provide access to Sims Flat from the main road and rail routes that traveled up the Sacramento River Canyon. Although not an official part of the trail, it is possible to do a small loop to start off the hike by walking across the bridge and then following the train tracks north to the road. From there, cross back to the east side of the Sacramento River, enjoying the view of Mount Shasta while on the new bridge. Once back at the trailhead by the bridge, it is also possible to follow a very short trail through a forested picnic area to a wheel-chair accessible walkway that switchbacks down to the river and a nice observation deck. The railings are angled to help absorb the impact of objects in the water during storms or the spring runoff. Return back to the east side of the CCC bridge and the trailhead. 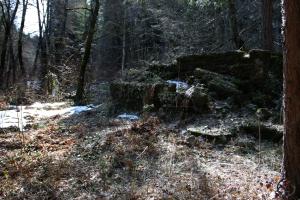 Once ready to follow the actual Sims History Trail, head south along the river. The paved path generally stays 10 to 15 feet above the river, which is only an arm’s reach away. Though there are campsites nearby, the proximity of the river draws attention away from campers and to the rush of the waters as they head south toward Shasta Lake. About 0.1 miles from the trailhead, a small wooden bridge crosses a gully that is usually dry. After enjoying the river for a while, the trail bends away from the Sacramento another 0.1 miles beyond the wooden bridge. Here the trail passes a restroom on the outskirts of the campground. Now, rather than the Sacramento River, the trail follows Hazel Creek, which begins on the inaccessible slopes of Tombstone Mountain, one of the highest and most prominent peaks in the cluster of mountains between the Sacramento and McCloud Rivers. A short distance down the trail reveals the ruins of an old sawmill. The mill was constructed to provide lumber for the CCC camp that once occupied Sims Flat. Not much more than stone walls and some foundations remain but its proximity to Hazel Creek is not surprising. The swift current of the creek once powered the mill. Beyond the sawmill, the Sims History Trail curves around the eastern perimeter of the campground. The trail ends at an ornately arranged series of stairs that used to be part of the old CCC camp. Displays here discuss the history of the camp. The stairs are constructed of local stone and are reminiscent of the NPS Rustic style so strongly associated with construction projects built by the CCC during the Depression. 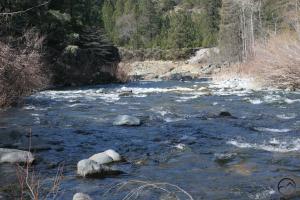 The Sacramento River at the confluence with Hazel Creek.

Though the trail ends at the stairs, there is more to explore here, including the most scenic part of the trail. Return on the trail to the point where it veers away from the Sacramento River. Between the restrooms and the last campground along the river, there is a use trail that heads west. Note that at this point the river has developed a slough, separated from the river by a rocky spit of land. Follow the use trail for 40-50 yards, until the slough has largely dried up. Climb down into the rocky gully and back up onto the clear, rocky level area between the slough and the river. Head straight toward the river and pick up the faint use trail that has been worn into the rocky terrain. This is the prettiest stretch of river in the Sims area. Rather than being just a swift moving waterway, here the river pours through a series of rapids and is noticeably louder than the stretch that runs along the campground. Follow the rocky use trail along the banks for 100 yards or so. Soon the trail drops down to the river in order to pass a thick bramble. It soon climbs back up above the water and crosses the now very shallow slough. A few dozen more yards reveals the confluence of Hazel Creek and the Sacramento River. Just beyond the confluence, the beginnings of a shallow but very rocky little gorge are visible, just as the Sacramento rounds a bend and disappears from view. When the water in Hazel Creek is low, the creek can be forded. On the far side is a nice sandy beach and the opportunity to climb above the rocky gorge and watch the Sacramento River racing through. 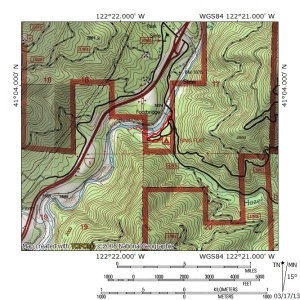 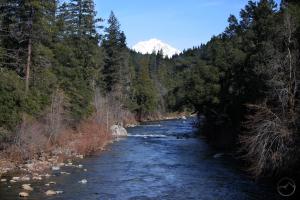 Mount Shasta above the Sacramento River.

On I-5 north of Lakehead and south of Castella, take the Sims exit. Drive east on Sims Road and descend down towards the Sacramento River. Cross over the river and park at the entrance to the Sims Campground, next to the old bridge.