A pleasantly level section of the PCT that parallels the McCloud River through a remote and rugged canyon, ending at scenic Ah-Di-Na campground with historic ruins and great river access. 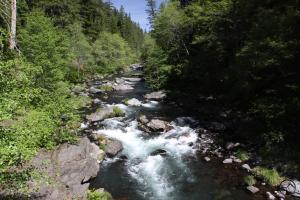 Upstream from the PCT bridge over the McCloud River.

The McCloud River is one of the Mount Shasta area’s great attractions. Its clear waters draw anglers, kayakers, swimmers and river-lovers in general. The river is also popular with hikers but most naturally gravitate to the section of the McCloud River Trail that passes the river’s three excellent waterfalls. This part of the river passes through classic volcanic terrain, exemplified by the numerous basalt formations, before being quieted by the impounded waters of Lake McCloud. Below the reservoir the river enters a different geologic zone, exhibiting a closer kinship with the vast, none-volcanic Klamath Mountains that lie to the west. Other than the tough-to-reach McCloud River Preserve Trail, this permutation of the McCloud is generally left unappreciated by the general hiking population. This is a shame because, with the exception of the McCloud Falls area, this is probably the prettiest section of the McCloud River. Below Lake McCloud, the river is large, wide and filled with large boulders. Though there are no large waterfalls like further upstream, the river below the dam is loaded with large cataracts created by concentrations of huge rocks bottling up the water. Some of these cataracts are as high as 10 feet, giving them a waterfall-like appearance. Unfortunately there are no trails directly accessing this awesome section of the McCloud River. However, for those motivated to explore this wild stretch of awesome river, the Pacific Crest Trail does offer some limited opportunities. Beginning at the small Ash Camp campground, the PCT crosses the McCloud and then maintains a parallel course along the river for 3 miles. Although well above the river, the trail is still quite scenic and very remote. After the trail intersects a dirt road, a short road hike leads to isolated Ah-Di-Na campground, where there are multiple places to access the river. Ah-Di-Na also has several historic ruins dating back to when it functioned as one of the McCloud River’s elite fishing clubs. A short trail leads to numerous displays detailing the old fishing camp’s history, which adds another layer of interest to an already worthy destination.

A couple of caveats must be mentioned. First, it should be reiterated that this section of the PCT does not pass directly alongside the McCloud River. The trail is nearly 300 feet above the river. Though there are often tree-filtered views of the water, it is not like other trails along the McCloud, where the water is often just a few feet from the path. Fortunately there are numerous side trails that lead down to the river but these require steep ascents on the return to the PCT. Second, though the trail is level and easy, it is not a great hike to take kids on. This is mainly due to the presence of poison oak along some sections of the trail. It is not so pervasive that it makes passage impossible without contact but kids may not be discerning enough to avoid it. 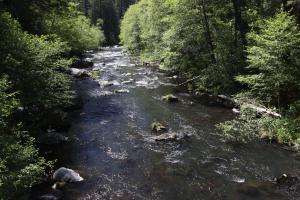 Downstream from the PCT bridge over the McCloud River.

The Pacific Crest Trail departs Ash Camp to the north, cutting downward along the slope of the canyon. Ash Camp is situated on a spit of land nestled between the McCloud River and large and boisterous Hawkins Creek. If time permits it is worthwhile to scramble down to the water’s edge at the confluence and enjoy the watery playground made of creek, river and an abundance of large boulders. It is vaguely reminiscent of Yosemite’s Happy Isles area. Back on the PCT, the trail soon reaches a large wooden bridge over the McCloud. Views of the rushing water from the bridge are among the best of the entire hike. On the far side the trail turns to the south and begins to parallel the river, about 100 feet above the water. Below the trail the confluence of Hawkins Creek and the McCloud is wide and rocky and the sound of the crashing water is nearly deafening. 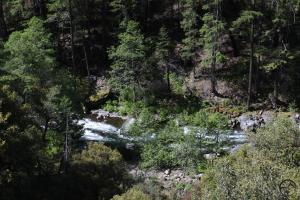 View down to the river.

About 0.1 miles from the bridge the trail makes a turn to the west, beginning the PCT’s westward trajectory for the duration of the hike. The river, however continues to the south, making a longer horseshoe bend to the west. While the trail and the river are separated the river is still quite audible. Large old-growth trees abound along the trail and the forest’s understory nearly surrounds the path in some places. Be sure to look for well-established use trails branching off to the left from the main trail. These lead down to the river as it is making its wide turn. The river is at one of its most scenic manifestations along this stretch and it is worth the time to head down to the water’s edge. When the river and trail finally regain their parallel orientation, there are some fine views down to the water roaring a couple hundred feet below the path. There is another use trail along this section that leads down a nice campsite adjacent to some excellent whitewater. 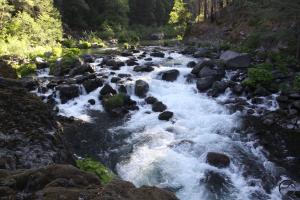 Ferocious cataract on the McCloud River.

Continuing on the PCT, the trail is slung across the steep slopes that plunge down to the bottom of the canyon. There is little room for exploration off of the trail and what opportunities are available are discouraged by the presence of poison oak. Thick stands of oak, ponderosa pine and douglas fir are ubiquitous and are generally to blame for the lack of views down to the water. Hearing it roar makes it feel tantalizingly close but still out of reach. Nonetheless, when a chance to see it does pop up, it is quite a sight since it is a particularly wild and violent section of the river. About 0.95 miles from Ash Camp there is an obvious use trail that descends very steeply down to the water. For hikers looking for an impressive example of the kind of rapids on this section of the McCloud, this is a good opportunity to observe one of the river’s larger cataracts. A band of massive boulders runs across the entire width of the river, forcing the water to pour over a 10 foot drop by means of a series of cascades and small plunges. The fury of the water forcing its way through the rocks is inspiring. 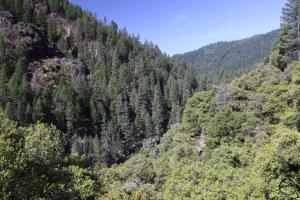 View of the remote canyon.

Back on the trail, the PCT continues its westward direction. The latter half of the trail permits fewer views of the river from this point and the use trails down to the water all but disappear. However, what the trail lacks in river views it gains in vistas of an increasingly rugged and narrow canyon. The walls on the south side of the McCloud have gotten quite vertical and large crags protrude from the dense forest that blankets the canyon. The trail, located on the north side of the river, traverses correspondingly more rugged terrain as well. The path is often hacked into veins of rock, exposing the route to more sunshine and great views of the remote canyon downstream. With the river ever-audible and the views of the canyon, this is a very scenic part of the trail. However, 2.2 miles from Ash Camp the trail makes a sharp turn to the north, entering a side canyon drained by Fitzhugh Creek. In short order the path converges with an old, abandoned and overgrown road. The two make common cause for about 100 yards before the PCT breaks away and crosses the small creek. There is a small PCT thru-hiker campsite at the creek. Once across the small stream, the trail traverses the far side of Fitzhugh Creek’s canyon before turning west again. Another short dip through the small gully of a smaller stream is the final leg of the PCT before it deposits hikers on the side of a dirt road. 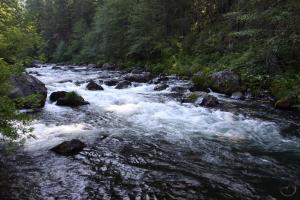 The McCloud River at Ah-Di-Na camp.

Across the road a sign marks the PCT’s continuation of its journey to Squaw Creek and beyond. For day hikers, it is better to continue on road to Ah-Di-Na Camp. It is slightly more than 0.5 miles on the road to get to the campground. The road descends gradually through another gully and then rounds the far side, marking the final drop down to the river’s level. Watch for abundant locust trees along the road. These trees were favorites of pioneers and frontiersmen because the tree grows quickly, adapts to various kinds of soil, is extremely strong and rot-resistant and, when burned, gives off similar BTU’s as coal. The presence of these trees, which are native to the southeastern U.S. are always indicative of early American settlement. After passing some roadside locusts, the road finally arrives at the entrance to Ah-Di-Na camp, 3.4 miles from Ash Camp. Situated on a wide flat adjacent to the river, it is the perfect place for a campground. Passing first through a large meadow, the campground is located around a large loop. There is running water and some bathrooms. Access to the river is available at various points, making this a great spot to stop and relax and enjoy the McCloud River and its rugged canyon. One interesting possibility is the opportunity to backpack in to the campground and spend the night. The next day one can hike 1 mile further down the road to the trailhead of the McCloud River Preserve Trail, which continues downstream for another 2.5 scenic miles. Early in the season when snow covers the high country, this is a great overnight option! 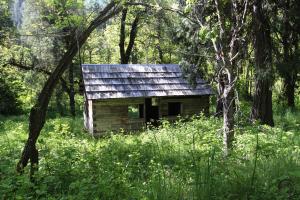 Part of the fishing club ruins.

One interesting feature of Ah-Di-Na camp is the presence of numerous large ruins dating back to the areas day as an elite fishing camp. Downstream other private fishing clubs still maintain ownership of the land on the McCloud. The Nature Conservancy owns the immediately downstream area but this was donated by the McCloud River Club in the 1970’s. Beyond that the same club still maintains its rights to the river. Further still is the Bollibokka Fishing Club, which owns the land around the river immediately to the north of Shasta Lake. These clubs thrive due to the McCloud River’s incredible fishing. Ah-Di-Na was once owned by the Hearst family, which still owns the incredible Wyntoon property just downstream of the McCloud Falls area. They donated the Ah-Di-Na area to the Shasta-Trinity National Forest in 1965, likely a result of being cut off from the land by Lake McCloud. Whatever the reason, it was a gracious gift that is still enjoyed today. The ruins include the chimney of the main lodge, several root cellars and a large, enclosed basement, cabins, some unlikely (empty) swimming pools and a still-productive fruit orchard. A short and increasingly overgrown trail leads to interpretive displays at each of the ruins. It is a fascinating glimpse into a bygone age. 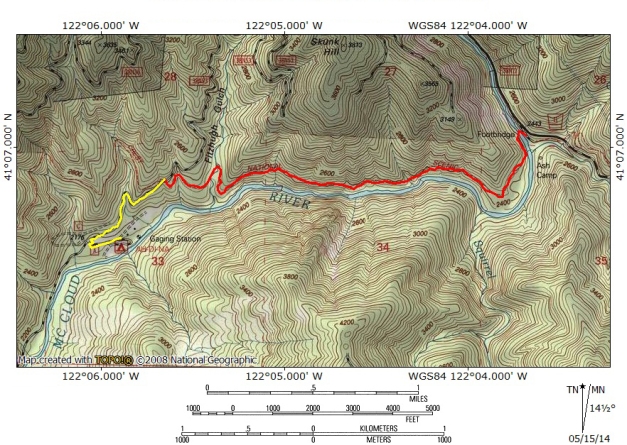 From the main intersection in McCloud, drive south for 9.2 miles until reaching Lake McCloud. Stay to the right on the main road and continue for 4.1 miles around the reservoir to the dam. Cross over the dam and proceed another mile to the signed fork at the entrance to Ash Camp.