A short, easy trail that stays close to the rim of the Sacramento River’s Box Canyon. Along the way the trail provides views into the narrow gorge, passes an exciting route to the canyon bottom and enters a unique auto and appliance graveyard.

Inside the Box Canyon of the Sacramento River.

The Box Canyon of the Sacramento River is most often observed from the Box Canyon Dam, which impounds the Sacramento River to form Lake Siskiyou. The canyon is a narrow, cliff-lined gorge through which races the river, just released from the dam discharge. Unfortunately, the view that most people get from the dam is marred by the protective fencing that lines the dams’ sidewalk. Most gaze down into the canyon with interest and move on. Fortunately, there is another, better option to experience this interesting river gorge. The Box Canyon Trail begins just a few dozen yards from the dam, but for some reason, it seems to fly under the radar and is not very well known. The trail has many things to recommend it. First, it is a scenic trail that has interesting routing and offers several vistas down into the canyon. Second, it is an easy trail. At just under a mile, it is short and level, making it perfect for a leisurely afternoon excursion. Third, the trail has fascinating historical artifacts, namely an old car and appliance graveyard where the aforementioned items, dating back to the 30’s, are piled up along the trail. Lastly, the Box Canyon Trail includes a spur that offers an exciting descent to the bottom of the canyon, next to the river. A bonus to all of these features is position and elevation of the trail, which make it a good option during the winter months, when the high country trails are still snow bound.

Looking across the canyon to the Box Canyon Trail.

The Box Canyon Trail begins on the north side of the Box Canyon Dam. It begins with a very mild descent, passing through a mixed forest of ponderosa pine, cedar and oak, as well as brush, much of which is composed of manzanita. After only 0.1 miles, an obvious, wide trail splits off to the south. This is the trail that descends into the bottom of the Box Canyon. A description of that route will follow the description of the main trail. Beyond the junction with the route into the canyon, the trail proceeds to the west and instantly comes upon a broad, arcing slope of the canyon wall, covered with what must be several thousand river rocks. It seems to be in place to prevent erosion. It must have taken a staggering amount of work to gather and place all of those stones. At the very bottom of the stone embankment is a small spring and its subsidiary stream that passes through a very narrow ribbon of meadow. This can be accessed by the descent route. Above the stone embankment one can see the edge of the Mount Shasta Resort Golf Course, including greens, pathways and a small bridge that carts can drive on. As one hike above the stones, look down into the canyon to observe a pretty waterfall falling down the cliffs into the Sacramento River.

The Box Canyon Trail passes through the car graveyard.

Beyond the stone embankment and the golf course, the trail narrows considerably and becomes a normal, singletrack trail. It soon passes a small, spring-fed creek. The creek has an attractive, narrow gorge of its own as it drops down toward the Sacramento. Beyond the creek, the trail maintains an easterly course along the Box Canyon rim. Soon one might notice a few rusty barrels. These are followed by a couple of old, rusty cars, in states of deep decay. This is just a harbinger of the extensive auto-appliance graveyard ahead. The graveyard seems to have been the place when the earlier residents of Mount Shasta City would push their unwanted cars and appliances down the hill to dispose of them. At the time, the slope must have been clear of trees. Now it is heavily wooded and would have been impossible to position the objects were they are currently placed. Some even have trees growing through them. The auto-appliance graveyard is much more extensive than appears from the trail. There are some use trails that wind their way through the extensive collection of antiques. This makes an interesting excursion all its own. Rather than seeming like trash or litter along the trail, the graveyard adds an interesting angle to the Box Canyon Trail and seems more like a piece of history than an old dump.

Looking into the Box Canyon of the Sacramento River.

Beyond the auto-appliance graveyard, the trail soon crosses another small stream, this time utilizing a small bridge made of piled logs. The angle of the canyons slope has steepened considerably by this point and the trail is now well below the canyon rim, though it is still above the cliffs that make up the Box Canyon proper. The river, and along with it the trail, now bend to the south. The path has a little more exposure than before and one is able to look down directly to the river, though the view is still obstructed by some trees. A short distance after the trail has turned south, watch for a well-established spur trail branching off to the right. Follow this to a series of rock outcrops. One can climb out onto the rocks and get great views down into the canyon. In fact, these offer the best views of the canyon, other than the descent route. Back on the main trail, the path proceeds a little further, to another rock outcropping, but the views here are not very good. The real climax of the trail was the first rocky overlook. 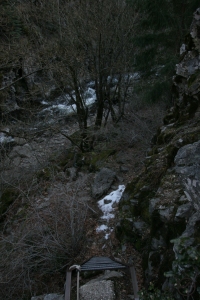 Perhaps the best part of the Box Canyon Trail is the opportunity to climb down into the seemingly inaccessible canyon. At the previously mentioned junction at the beginning of the trail stay to the right. The trail drops steeply down the side of the canyon, toward the stone embankment. Just before reaching the massive stony slope, the trail turns to the right. Here the route steepens considerably and begins to climb down the rocky inner gorge. Though not necessary, thick ropes have been securely fastened to aid the climbing. At the bottom of the rope section the trail utilizes iron ladders mounted to the cliffs to finish the trip to the canyon bottom. Once inside the canyon, there is a broad, rocky bench flanked by the Sacramento River. One can scramble over the rocks upstream and get a rare glimpse of the Box Canyon Dam from the bottom. It is much more imposing from below than above. If one scrambles downstream, there is perhaps the best view of the whole trip, where the canyon narrows and the river crashes against cliffs on both sides of the canyon. To complete the picture, a small but attractive waterfall cascades into the river. 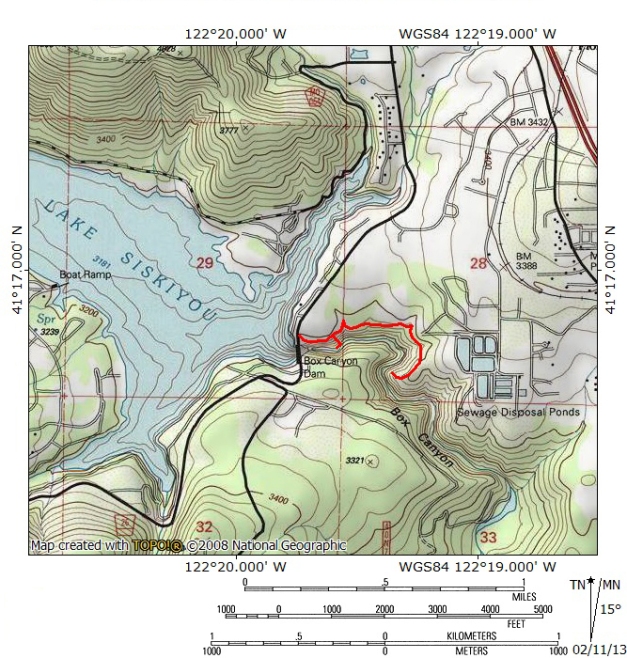 From the town of Mt. Shasta, head west on W. Lake, crossing over I-5. At the stop sign, turn left onto Old Stage Road. After 0.25 miles, veer right onto WA Barr Road. Continue south, turning right into the parking lot just before crossing over the dam that impounds the Sacramento River and forms Lake Siskiyou. Walk across the street and look for the sign hanging from a tree, marking the beginning of the Box Canyon Trail.