My mother’s primary hobby, aside from grandmothering, is thrift shopping. She is a predator, in search of cheap prey. This always yielded a mother lode of good things for me when I was growing up. Clothes, toys, you name it, I had it and most of it came from thrift stores. In the last few years, she discovered what she named the “wild thrift shop”, which is the distribution hub for the Goodwill. At this particular thrift store, they roll in all the new deliveries in large, unsorted bins. Things are bought by the inch and by the pound. The quality and quantity of goods acquired from this place by my mother is tremendous. 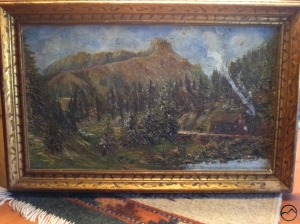 What do thrift stores have to do with Mount Shasta? Last week my parents came up to Mount Shasta to stay for a few days. My mother brought with her a painting that she found at the “wild thrift shop” a few days earlier. The painting is obviously old, but it is not the most attractive work. At first glance, the mountain depicted does not look like Mount Shasta. What caught her eye was a printed label that identified the artist, E.S. Evans, and listed a number of landscapes that he had painted. At the bottom of the list was a blank spot where the location could be written and “Mt. Shasta Calif” was hand printed in that spot. Despite its not looking anything like Mount Shasta she bought the painting and brought it up to my house.

Just days before my parents arrived, I had been uploading pictures to Hikemtshasta and just happened to have uploaded an image that featured the great volcano from the same perspective as it was painted in the old picture. When I saw the picture I instantly recognized it for what it was. Rather than being a painting of Mount Shasta from somewhere down below or from a distance, it was a portrayal of the mountain from on the mountain. Specifically, it was the view from the top of Hummingbird Saddle, which is the divide between the Old Ski Bowl and the Valley of the Moon. In an act of artist’s license, the painter added far more trees than are actually present and included a cabin that may or may not have existed at that spot. The unusual angle, the trees and the cabin all contributed to obscuring the fact that is really was Mount Shasta.

I was intrigued and wanted to know more about it. The obvious first place to go for information is the Sisson Museum in Mount Shasta. Unfortunately the museum is closed for the winter. On a whim, my dad and I went to the Forest Service to see if anyone there was keen on the art of Mount Shasta. Not surprisingly, there was no one there with the knowledge necessary to find out more about the painting. However, I was directed to the two gentlemen most knowledgeable on the subject, one the head of the Sisson Museum and the author of Sudden and Solitary, the definitive book on the art of Mount Shasta, and the other the recently retired head of the College of the Siskiyous Library. I spoke with the latter on the phone and they are both extremely curious about the painting. Of particular note to them is that depending on the paintings’ as yet undetermined age, it is possibly the oldest depiction of Mount Shasta from on the mountain. We agreed to meet and examine the painting together to try to determine the age.

Since speaking with them, I noticed two bits of information that will help set the painting’s age. Both are found on the printed label on the back. First, there is a solicitation from the artist for paintings based on pictures or postcards. In particular, it mentions Kodak pictures. Since Kodak was founded in 1889, it can be no older than that. The second data point gleaned from the label is found in the list of subjects regularly painted by the artist, E.S. Evans. He was located in Boulder, Colorado, which is not far from Estes Park. Nowadays, Estes Park is the gateway community to Rocky Mountain National Park. The park was created in 1915. Several of the locations that are now in the park are listed as being in Estes Park. Many of them are pretty far from Estes Park and are in the heart of the mountains that now make up the national park. It seems likely that if the park had been created at the time of the painting was completed it would have indicated those locations were in the park rather than distant and generally unrelated Estes Park.

I meet with the two gentlemen next week and we will work on dating the painting. I will write another post afterwards, detailing our findings.

Part Two of my investigation of the painting can be read here.

Exile: How I Came To Love Wilderness

“All America lies at the end of the wilderness road, and our past is not a dead past, but still lives in us. Our forefathers had civilization inside themselves, the wild outside. We live in the civilization they created, but within us the wilderness still lingers. What they dreamed, we live, and what they lived, we dream.”

T.K. Whipple wrote these words in his essay “Myths of the West”, which is found in a book entitled “Study Out The Land”, a collection of his writings regarding the American West and the wilderness therein. The book is extremely difficult to find. I have only had it in my hands in the libraries of universities that have large collections of books about the West. The quote, though, is more famous than Whipple’s book because of its inclusion as the epigraph in Larry McMurtry’s excellent book “Lonesome Dove”. For those who have not read the novel, I strenuously recommend it, not just for the epic, excellent storytelling rife with adventure, humor and tragedy, but because of what it sees in its rear-view mirror and mourns. More than anything else, the book is a paean to the old west that has passed away, and to the nature of friendship. 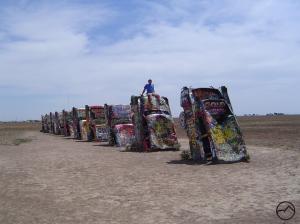 Lonesome Dove had a significant impact on my development as a writer and outdoorsman. Although I had seen the television mini-series (which is an excellent adaptation of the book and, for my money, the best western of all time) several times, I had never read the book. When life took me to Dallas, Texas for graduate school, I was ripped away from the land and mountains that I had grown up in and loved. Having spent my entire life in northern California, I had become dangerously complacent about how much the rocks and rivers of the wild had meant to me. I remember my third week (out of four years!) in Dallas, driving down a busy city street, thinking “what have I done?”  Four years in the concrete labyrinth was a suddenly depressing prospect.

The Texas Caprock loomed large in the story of Gus and Woodrow.

To cope with my new reality, I stretched beyond my normal comfort zone, and began reading books that I had not bothered with before. Chief among these was Lonesome Dove. I was familiar with the story since I had seen the movie, but, as great an adaptation as the movie is, it falls short for one significant reason. The film justifiably focuses on the characters, particularly Gus and Woodrow, though the others get their due as well. However, one critically important character present in the book is missed in the movie. That is the land. The land, the place, is as much a character in the book as the people are. Being stuck in Texas, the land where much of Lonesome Dove takes place, made the book resonate with me in a way it would not have if I were back in California. I realized the wilderness is not just mountains and beauty is not just waterfalls, though those things were still preferred. Now I had a growing sense of what the land meant, what it means to me, and how the things I now missed were present in Texas too, but only in a different form and often more difficult to find.

Having recalibrated my expectations, I set about traveling, exploring, and hiking the land I was in. Needless to say, most of the Texas landscape does not inspire a sense of awe, save for the sheer size of it (as the old adage says, “the sun is riz and the sun is set and we ain’t left Texas yet”). It was by means of these explorations that I came to love some places of unexpected beauty, one in the unyielding flatness of the Texas Panhandle (they say it is so flat you can stand on a can of tuna and see the curvature of the earth), the other across the “international” border in Oklahoma: the Caprock and the Wichita Mountains. It was in these places that I found the wildness I missed and yearned for and the solitude and wonder I had recently found I needed. I also discovered that I loved wilderness for another reason, one I had not realized was present before my reading Lonesome Dove. In addition to the adventure, isolation and beauty present in the wilds, I learned that it was in those places more than any other where I came into contact with the past. As a historian, this was a moment of great personal discovery. Through immersion in the wild land, I was immersed in the land as it was when Kit Carson or Charlie Goodnight would have seen it when they passed through. Going forward, there was a new perspective that would enable me to appreciate lands far different from the alpine grandeur of the mountains I grew up in.

Safely home: Mount Shasta from an overlook near my house.

Now I have left Texas and Oklahoma behind me and I live in a mountain paradise, the kind of place I dreamed of while being stuck in Dallas. I still think fondly of the refuges of wilderness I found and hope to return to them in the future (I did make it back to the Wichita Mountains for a day in April2012) but more than those places themselves, it was the awareness of what the wildness means to me and how essential it is to my person. Like the Whipple quote says, I live what the mountain men dreamed, a life of civilization and progress, but in the midst of modernity, it is the life untamed that they lived that resides within me.