A scenic and seldom used section of the long McCloud River Trail that runs from the wonderful Cattle Camp swimming hole to the group campground at Camp 4. This is the longest individual segment of the River Trail and one of the least used. It parallels the river nearly its entire length, offers intimate exposure to the river and is very lightly used, with great odds at wonderful solitude.

Along The River Running Pt. III 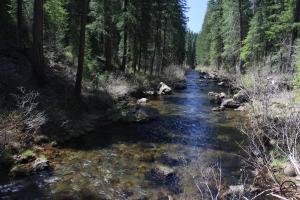 A lonely stretch of the McCloud River.

The McCloud River is one of the great waterways of Northern California. Known for its fantastic fishing and trio of excellent waterfalls, it is a river steeped in primeval beauty. With the exception of the impoundment that forms Lake McCloud, it is a wild, free-flowing river until finally being stilled at Shasta Lake. The McCloud River rises in the lowlands around the division between the Lassen and Shasta Cascade regions to the east of Mount Shasta. It flows west, passing through the McCloud Flats before finally pouring into the McCloud River Canyon, the end of which concludes its journey to Shasta Lake. Over the course of the river’s 77 miles most hikers intent on exploring the river do so via the McCloud River Preserve Trail and the McCloud River Falls Trail. However, this is by no means the extent of the trails that explore the river. The latter of the two in particular is only a small section of a larger trail system that sees little use and even less notoriety. The trail to the three McCloud Falls is a 2.5 miles segment of the more extensive McCloud River Trail, which stretches along more than 15 miles of the McCloud River. Hikers justifiably gravitate to the spectacular waterfalls to the exclusion of the rest of the McCloud River Trail. This leaves over 12.5 miles of riparian pathway left almost unused and a perfect opportunity to enjoy a beautiful river with some quality isolation

The segment of the McCloud River Trail between the Cattle Camp swimming hole and the Camp 4 group camp is one of the trail’s least traveled sections. In some ways, this is the most quintessential section of the entire route. Having been increased by some larger creeks (most notably Tate Creek, which begins well to the south along the Pacific Crest Trail) the river is larger than it is along previous sections. For most of the nearly 5 miles between to swimming hole and group camp the river passes through another shallow canyon, which means that the trail is almost always within sight of the river. Indeed, most of this section sees the trail slung on the canyon sloes just above the river. The frustrating trail engineering that, while logical, diminished the quality of the section of trail between Nitwit and the swimming hole is almost entirely absent along this section of trail. Passage through the shallow canyon also means that the river is almost never still and is constantly moving. The ubiquitous sound of rushing water is always a welcome addition to any trail and on this section of the McCloud River Trail is present in spades. Adding to this section’s qualities is the lack of use. Solitude is practically guaranteed.

While all the descriptions for the McCloud River Trail are oriented from east to west, it should be noted that if a shuttle can be arranged so that one only has to hike one way, this trail is better done from east to west. Beginning at Camp 4, the trail begins along the river immediately and follows until a short deviation near the end. However, the swimming hole at Cattle Camp is a fantastic destination and makes for a great conclusion to a fun hike. If out and back is the only option, beginning at the swimming hole makes the most sense because that excellent spot can still be enjoyed is much more of a highlight than the Camp 4 area (which is still quite nice).

Read about the previous section of the McCloud River Trail here.

The beginning of the trail at the Cattle Camp swimming hole is one of the most scenic spots along the entire McCloud River Trail. The deep swimming hole, crystalline waters, small cliffs and the sight of the river racing through the short but scenic basalt gorge all combine to make a wonderfully idyllic spot, the perfect place to spend a summer day. As mentioned above, the swimming hole makes a great destination and if it is possible to do this section as a shuttle hike, beginning to the west at Camp4 permits weary hikers to finish the hike at its most scenic point.When one is prepared to depart from such a wonderful spot, the trail begins at the far end of the swimming hole parking area, near the bathroom. This part of the trail is well away from the river, making a seemingly inauspicious start. Though it quickly comes into close proximity to the river it once again follows the tedious pattern of steering clear of the river at the broad, flat areas. 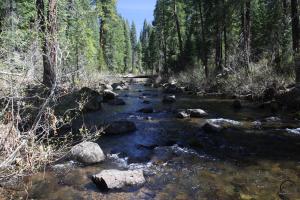 A fallen tree over the McCloud yields good views of the river.

After aforementioned brief contact, the river and trail once again part company. This lasts for about 0.3 miles as the trail makes a bit of a jog northward. Fortunately, the river is somewhat visible from the trail so it is not just a mundane walk through the woods. The separation is soon over and the river and trail converge again. At this point they entire another shallow canyon which means that they stay close together, a situation that lasts the rest of the hike all the way to Camp 4. One notable highlight of this section of the trail is the presence of a large cedar log suspended all the way across the river. Easily accessible from the trail, the log is wide and still retains much of the cedar bark. Consequently it has comfortable, stable footing and makes a great perch on which to enjoy climb out and enjoy great views of the river. Note the large secondary log leaning against the large fallen cedar. It is not immediately obvious that this log is not resting on the ground but was snagged on the cedar by a torrentially swollen river at some point in the past. 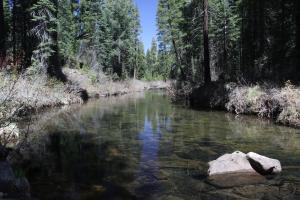 A calm but clear section of the McCloud RIver.

Beyond the log, the McCloud River Trail continues its long course just above the water. It should be noted that the McCloud River loop road is just beyond the rim of the canyon. Fortunately the road receives light use, is not visible from the trail and what little traffic is on it is generally inaudible thanks to the sound of the rushing water and being shielded by the canyon walls. At almost no point along this entire section of the trail does the road intrude upon the hike. It is a bit of a surprise that the section of trail in closest sustained proximity to a road also happens to be the most isolated section of the entire journey. No doubt this is due, at least in part, to the absence of any particular highlight. Instead, the trail makes a long parallel trip next to the river. This is, of course, the draw for this section. It is a quiet, simple journey along a pretty river. There are times when the river and trail veer well away from the road before edging close to it again. Closer to Camp 4 the road parts company with the trail and river completely, not to meet up again until the end at Camp 4. 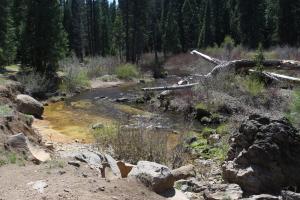 The McCloud River flowing through the Camp 4 area.

Soon this section also bids farewell to the shallow canyon as the area opens up a bit and the trail and river finally part ways as well. They meet up again at the end of the hike at Camp 4. Once an old logging camp, Camp 4 is now a Forest Service group camp. Not available for common use, large groups can reserve the campground. It is an extremely pleasant area. Large old growth trees abound and the river runs along the perimeter of the campground. On the north side of the area there is a sizable meadow. As the McCloud River skirts the meadow it passes through a bit of a boulder strewn gully. The lightly colored soil exposed by the river is partially composed of tufa, which is volcanic ash. This type of formation becomes much more common between Middle and Lower Falls, further downstream. This is another reminder of the regions volcanic past and certainly one of the more interesting. Unless utilizing a shuttle, hikers must eventually depart and make the long walk back to the Cattle Camp swimming hole. 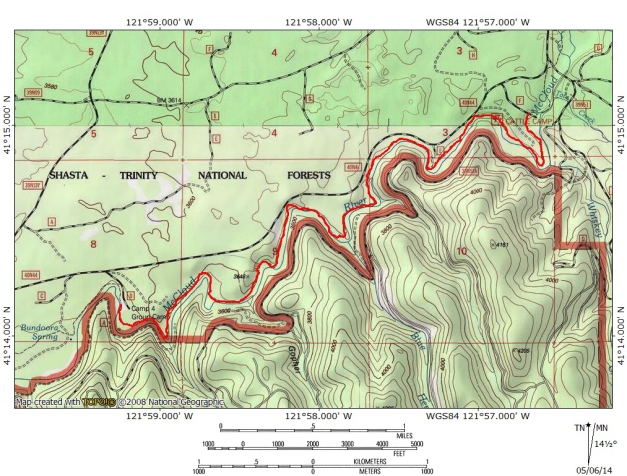 From the main intersection in the town of McCloud, drive east on Highway 89 for 10.1 miles. Turn right on the paved McCloud River Loop Road. Note this is the east entrance to the loop. Be sure to drive past the closer west entrance. Proceed south for 0.9 miles on the loop road and turn right at the signed turn for the Cattle Camp swimming hole.