An easy hike along the Pacific Crest Trail to the Seven Lakes Basin. Options abound as one can summit a peak with a fantastic view or explore the lakes of the basin. 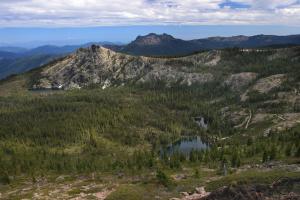 The Seven Lakes Basin below Many Lakes Mountain.

Providing maximum scenery for minimal effort, trip along the Pacific Crest Trail to the Seven Lakes Basin is one of the finest hikes in the Mount Shasta area. Far-reaching views are constant throughout the entire trip. While Mt. Shasta is scenery nonpareil, it is complimented by Mt. Eddy, the Trinity Alps, the Russian Wilderness, the Castle Crags, Grey Rocks and the many lakes found in the Trinity Divide. Boulder Peak, the rugged sentinel towering above the Seven Lakes Basin is not the least of these spectacles. After departing the PCT, the hikers have the option of descending down into the basin or continuing along the rim high above the Seven Lakes. From here there is a rough cross-country route that leads to the excellent summit of Boulder Peak. The PCT also passes beneath the summit of Many Lakes Mountain, which sits at the nexus of three different lake basins; the Mumbo Lakes, Cliffs Lakes and Seven Lakes Basins. A total of 14 named lakes and several unnamed tarns are found beneath the craggy summit of Many Lakes Mountain. The view from the top of the mountain is potentially the finest in the Trinity Divide, after only the spectacular view from Mount Eddy. A hike to the Seven Lakes Basin can be augmented by a quick scramble up to the summit of Many Lakes Mountain. Doing so combines for a truly spectacular hike.

Mount Shasta from the PCT.

The trail begins at the PCT trailhead on Gumboot Saddle. It begins heading south through a glade composed predominantly of Shasta Red Fir. The route soon climbs out of the trees and views of Mt. Eddy, Gumboot Lake and Mt. Shasta are excellent. The trail is level and traverses the crest of the Trinity Divide. After 0.75 miles the PCT shifts from the western side of the crest, which it has followed up to this point, to the eastern side. Another 0.25 miles later it passes through a saddle and returns to the western side of the crest, where it will remain until the pass leading to the Seven Lakes Basin. As the trail approaches the saddle, it traverses the large, sweeping basin containing the Mumbo Lakes. While the upper lake is shallow, the lower lake is deeper. Views of the Trinity Alps continue to improve, as do views of the Russian Wilderness, further north. To the south, the cluster of high Trinity Alps peaks that are focused around Gibson Peak are visible. 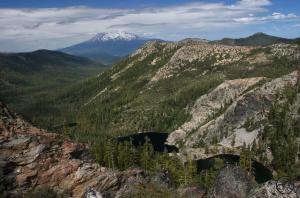 Mount Shasta and the Cliff Lakes from Many Lakes Mountain.

About 1.6 miles from the Gumboot trailhead, it is possible to scramble up the scree on the east side of the trail. Doing so will lead to the top of the ridge climbing up toward the summit of Many Lakes Mountain. The view from the ridge of the Cliff Lakes is magnificent, topped only by the 360 degree view from the summit. One can observe Mount Shasta, Lassen Peak, the Cliff, Mumbo and Seven Lake Basins, Mount Eddy, the awesome Grey Rocks, the Trinity Alps and even the distant Yolla Bollies if the air is clear enough. To return to the PCT descend northwest from the summit, through an obvious band of trees that drops all the way down to the trail. This band of trees also makes a handy point of ascent if one is willing to forgo the view from the ridge. 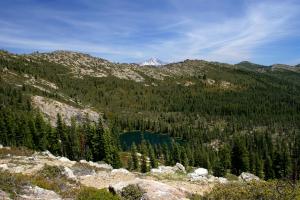 A little over 2.0 miles from the trailhead, the saddle separating the Mumbo Lakes basin with the Seven Lakes Basin is reached. Here Boulder Peak comes into view for the first time. Its’ sharp summit and sheer, rugged cliff rising out of the deep blue waters of Echo Lake are a fine vista to behold. Further to the south, beyond Boulder Peak, the hulking bulk of the Grey Rocks lurk ominously. The Grey Rocks are an impressive group of extremely rugged peaks composed of sedimentary rock. No trails lead to the summit, although they can be reached via a difficult cross-country trip from a couple of different starting points near Tamarack Lake (contrary to what one popular guide says, a route leading from Tamarack Lake itself is completely realistic).

From the saddle, the PCT swings east, traversing the upper reaches of the ridge that separates the Seven Lakes Basin from the headwaters of the Sacramento River. The ridge eventually leads to the Castle Crags. A low notch in the ridge is reached by an short scramble above the PCT and reveals excellent views of Mt. Eddy and Mt. Shasta, rarely visible in close perspective to one another. A similar, though somewhat less pleasing view can be had from the summit of Boulder Peak. From the point where the PCT heads east toward the Castle Crags, a prominently visible use trail continues south and quickly joins an extremely rugged 4×4 road. This road descends down into the Seven Lakes Basin, providing access to six of the seven lakes. The first two lakes, Upper and Lower Seven Lakes are the best options for swimming since they are nice, deep lakes. Of the two, Upper Seven Lake is the best. Echo Lake is the deepest lake but part of the lake is on private property and it is important to respect property rights.

Mount Shasta peaks through the trees beyond Helen Lake.

To reach the seventh, Helen Lake, and Boulder Peak, begin climbing up the slope above the road after 0.35 miles, continuing to angle south as one climbs. When the lake is reached, head toward the west side of the lake. Mt. Shasta can be seen peering through the trees to the north. A great cross-country hike leads from Helen Lake to the summit of Boulder Peak. Climb the ridge west of the lake. Once on the summit of the ridge, it is a simple, beautiful cross-country trip to the base of Boulder Peak. The views continue to be excellent and the travel is generally easy. Once one reaches the peak, it is an easy scramble up the south face to the summit. Another, shorter but worth while climb up Tri-Counties Peak heads out to the north from Helen Lake.

Mount Shasta and Mount Eddy seen from the PCT, above Terrace Lake.

From the town of Mt. Shasta, head west on W. Lake, crossing over I-5. At the stop sign, turn left onto Old Stage Road. After 0.25 miles, veer right onto WA Barr Road. Continue south, crossing over the dam that impounds the Sacramento River and forms Lake Siskiyou. At the intersection with Castle Lake Road, stay straight. The road becomes Forest Road 26. Follow this road for nearly 12 miles. A signed fork indicates Gumboot Lake is 0.5 miles to the left. Continue to the right, climbing up the cirque that contains the Gumboot Lakes. The PCT Gumboot Trailhead is located at the summit with a good parking lot.