A simple trail that passes alongside two attractive lakes and a couple of tiny meadows. Combined with a short trip on the Pacific Crest Trail, it leads to a fantastic vista of the Eddy Range, the South Fork of the Sacramento River and mighty Mount Shasta.

Looking down on Gumboot Lake from the trail’s end.

Tucked away at the far end of the South Fork of the Sacramento River’s headwaters canyon, the Gumboot Trail is a modest trail that connects pleasant Gumboot Lake with the Pacific Crest Trail. Although it does not boast exceptional scenery on its own, a short jaunt on the PCT after the two trails meet leads to a stunning view of Mount Shasta and the entire South Fork Canyon. Such a vista is an excellent destination for a short hike. Though the Gumboot Trail would not rate as a top tier hike, it is not without its charms. It begins at relaxing Gumboot Lake, climbs up to lonely Upper Gumboot Lake and then passes a pair of small meadows on the way to its junction with the PCT. Despite the presence of a campground at the beginning of the trip and the paved road at the trail’s junction, the Gumboot Trail does have a sense of great isolation when looking out over the windswept basin at the head of the South Fork’s canyon. It is an invigorating place and worth the effort in its own right if one is planning on a relaxing afternoon at the lake. Tacking on the short hike on the PCT to the vista at Gumboot Point elevates the trail tremendously and makes for an absolutely spectacular sunset.

The Gumboot Trail begins at the parking area at the east end of Gumboot Lake, adjacent to the small dam that forms the lake’s outlet. Though the lake is natural the dam raises the water level and increases Gumboot’s size. A handful of stumps are also testimony to the increased capacity of the lake. The route initially follows the road down the ford of Gumboot Creek and past a couple of the campsites. The only amenity supplied at the campground is a vault toilet, which is off to the right of the trail. A few dozen yards past the creek’s ford a yellow sign marks the beginning of the trail (it actually indicates the end of the area where fires are permitted but it serves as an effective trail marker). While this section of trail was once an old road, it has been a trail for so long that it has narrowed down to effective single-track.

Once on the trail, it begins to climb steadily. It is never too steep but the grade is just enough to makers hikers take note that the trail is gaining a fair amount of elevation. It maintains a westerly course for approximately 0.25 miles from the beginning of the single-track before it arrives at a junction marked by a series of cairns. The obvious main trail stays to the right. If one goes left the trail descends through some brush and arrives at the edge of Upper Gumboot Lake. Though not nearly as attractive as its elder sibling, it is still a pleasant place to relax. A faint trail follows the right (north) shore and then climbs up a slope as it angles to the north, eventually reconnecting with the main trail. Whether hikers choose to bypass the lake or make the short Upper Gumboot loop, the main trail continues to climb a little further, with occasional views of the basin to the north. Soon the trail passes two small meadows and then turns to the right. Climbing a little further, the path encounters one, tight switchback. One final ascent deposits hikers on the edge of the paved road at the PCT trailhead at Gumboot Saddle. This is the official end of the Gumboot Trail.

To continue on to Gumboot Point and the excellent vista, proceed a few yards along the road to the beginning of the PCT. Initially passing through dense forest, the trail soon leaves the forest canopy behind and enters a brushy area. The trail, at first heading south makes a turn to the east, staying just below the Trinity Divide’s crest. The trail reenters the forest and passes a few campsites. After another turn to the south the forest thins a little bit. Once again turning to the east, proceed a little further to where the trail crosses an area of exposed, gray rock. Leave the trail and scramble up the rock to the obvious highpoint. From an incredible vista unfolds. Immediately below is Gumboot Lake. The Eddy Range, a subrange of the Trinity Divide, extends to the north, capped by Mount Eddy. The canyon of the South Fork of the Sacramento drops away to the east, its southern side lined by the high peaks of the Trinity Divide’s great rib that leads to the mighty Castle Crags. The entire scene is crowned by magnificent Mount Shasta, holding sway over the entire region. It is a stunning sight, particularly in the afternoon, as the sun prepares to set. Of course, for those hiking to the Seven Lakes Basin, this vista is only the beginning of a spectacular journey but it makes a great climax to a hike from Gumboot Lake.

It is worth noting that there is a fine loop trail around Gumboot Lake. It is unconnected to the Gumboot Trail but they both depart from the same trailhead. Though not an officially maintained path, the use by campers and fishermen has made it easy to follow. The loop is very easy and has good views of the Trinity Divide crest to the west, including Gumboot Point, where the hike from Gumboot Lake ends. The view to the east is also interesting. There is also a fine meadow to the southeast of the lake. To reach it head to the southeasternmost corner of the lake and maintain that orientation through the woods for a short distance. Whether one is looking for a something very easy and relaxing or to add some distance onto a longer hike on the Gumboot Trail, the short loop around the lake is worth the minimal investment of time and energy. 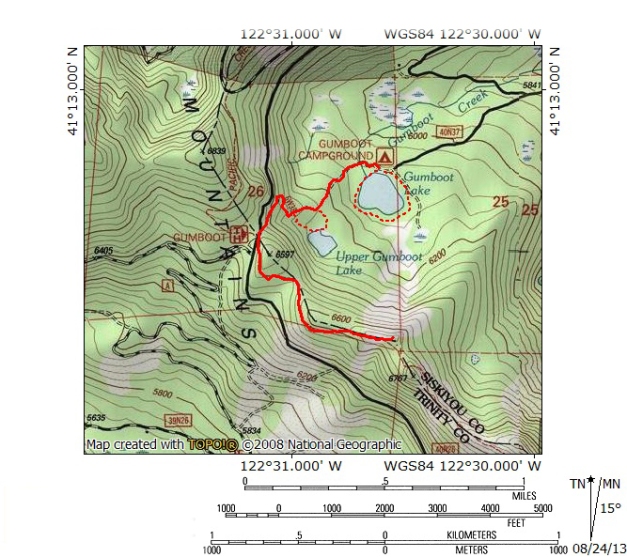 From the town of Mt. Shasta, head west on W. Lake, crossing over I-5. At the stop sign, turn left onto Old Stage Road. After 0.25 miles, veer right onto WA Barr Road. Continue south, crossing over the dam that impounds the Sacramento River and forms Lake Siskiyou. From the dam, continue 12.5 miles to the west, passing the lake and continuing up the Sacramento River.At 12.5 miles, veer left at the fork onto a paved road. Proceed to the trailhead at Gumboot Lake a short distance ahead.