A short, easy hike to Boulder Lake, a serene lake set amidst meadows and granite cliffs. For those looking for further adventure, a trio of small, attractive lakes await amidst the granite wonderland above Boulder Lake where hikers can also scramble up to the summit of Tapie Peak.

Short and Fast to Graceful and Granite 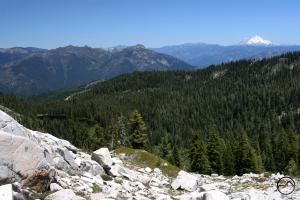 The Boulder Lake Trail is one of the more popular routes in the Trinity Alps. Its popularity is quite justified. Though not rising to the level of the spectacular or imposing, the Boulder Lakes are exquisite alpine jewels set amongst deep forests, lush meadows and bright, white granite cliffs. Rather than falling in with the grand and majestic destinations in the Trinities, the Boulder Lakes area is intimate and sublime, a choice slice of Klamath Mountains real estate. Unlike many other areas in the Trinity Alps, the Boulder Lakes can be had for minimal price. The trail is quick and easy, perfect for a swift trip into the wilderness or a great day hike with kids. This is one of the easiest trails in the Trinities. The short, relatively level route deposits one at the edge of Boulder Lake only 1.9 miles from the trailhead. While the lake is an excellent destination in its own right, it is only the gateway for a fantastic, introductory adventure into the backcountry of the Trinity Alps. From Boulder Lake, one can continue into the granite cliffs above the lake, visit Tapie, Lost and Found Lakes and throw in an ascent up Tapie Peak, quite possibly the Trinity Alps’ easiest summit to reach. Such a climb, while easy, is not without its thrills and its payoffs. Views from the summit are outstanding. Though Boulder Lake itself attracts a fair number of people, climbing to the small lakes tucked into the folds in the granite cliffs above the main lake leaves what crowds there may be behind. For those new to the Trinity Alps, the Boulder Lakes Trail ranks high on the list of potential trips for quick indoctrination into the range’s virtues.

The Boulder Lake Trail begins at the end of a large trailhead, where information about the area is posted. The trail immediately heads off to the south, following a now abandoned jeep trail. The grade is very mild and occasional views to the south are possible when the tree cover opens up. Perhaps because of the proximity of Boulder Lake and the usual presence of campers, bears tend to frequent this area. After about 0.5 miles the jeep trail transitions into single track and passes into a dense forest canopy under which it will remain for most of the duration to Boulder Lake. After a little over a mile the route makes a switchback, heading north before rounding the top of a bluff. Ducks found on the left side of the trail mark the intersection with the 0.5 mile route to Little Boulder Lake. Though neither as large nor as beautiful as elder sibling, Little Boulder Lake is a fine mountain lake, with a large granite headwall rising out of its southern shore. If the campsites at Boulder Lake are full, this is a great nearby option for those not eager to climb up to the trio of satellite lakes above the main lake. 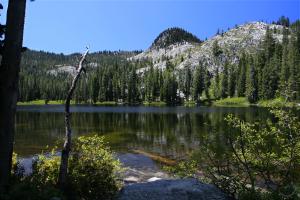 Returning to the main trail’s junction with the Little Boulder Lake route, the path drops moderately into the Boulder Lake basin. After the trail descends, it deposits one at the outlet of the lake where there are 5 or 6 good campsites. Boulder Lake is a restful spot rather than a lake that energizes one’s sense of awe. Large, but not huge, it is ringed with lush meadows. Above the west side of the lake rise a series of granite cliffs, topping off at the 7,435 summit of Tapie Peak. Beyond the peak is a ragged ridge that forms the divide between the Boulder Lakes Basin and Poison Canyon, headwaters of the North Fork of Swift Creek. Campsites line the shore of Boulder Lake, especially along the northern and eastern sides. The trail continues along the western shore, skirting the lake’s meadowy fringe while never fully emerging from beneath the forest canopy. Soon, however, it passes the lake’s inlet and enters the most extensive meadow in the area, which extends southward from the southern end of Boulder Lake. For those only hiking to the main lake, this meadow would be the extent of one’s explorations without undertaking the climb up the granite cliffs that loom beyond the water.

If intent on reaching Tapie, Lost and Found Lakes, stay the course on the trail as it proceeds south from the meadow at the inlet to Boulder Lake. It crosses the inlet’s creek and passes under forest canopy. Soon the trail begins to climb, first moderately and soon more steeply. This section of trail is called the Tracy Trail. It climbs the ridge and the south end of the Boulder Lake Basin and connects to the Poison Canyon Trail, which loops along the rim of the cirque containing tiny Lilypad Lake and is crowned by awesome Ycatapom Peak. As the grade of the trail increases it crosses back over the creek. Soon the path arrives at a small, willow-choked meadow. Towering overhead is the ragged towers of Tapie Peak. This rough, sheer block of granite appears far different from the gently sloped summit that rises above Boulder Lake. When the trail finally makes a hard eastward turn in the meadow, this is the point one must leave the trail and begin the cross-country scramble to the trio of lakes. Once off the trail, listen for the sound of running water, which should last through most of the season. Though there was a creek visible during the climb up to the small meadow, it is not readily visible at the meadow, since the meadow itself is the source of the stream. Hike toward the water. If none is heard, head due west from the trail. If climbing Tapie Peak, resist the temptation to climb around to the south side and ascend directly up the southern face. Horrific brush fields bar any reasonable access to the summit. It is easier to stay the course, continue to the three lakes and climb the peak from that direction. 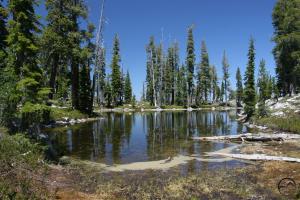 Beyond the meadow, the route to the lakes simply traverses the boulder field at the northern foot of Tapie Peak. If one manages to maintain a fairly level course, then after following the boulder field, hikers will have to cross a small draw, on the other side of which is Lost Lake. The lake is small and shallow but it has lovely old growth trees around its perimeter. This is the smallest and plainest of the three lakes. A little to the northwest of Lost Lake is the rim of the cliffs above Boulder Lake. From there it is possible to look down on Tapie Lake, tucked into a narrow granite trough. It is an attractive body of water. To reach the lake, head north from the view point, following the rim of the cliffs. Soon a band of trees extends downhill to the right, towards Tapie Lake. Simply descend here to reach the small lake. Back at the view point, looking beyond Tapie Lake, the vista provides great views of Mount Shasta, Billys Peak, Ycatapom Peak and the Boulder Lake basin. 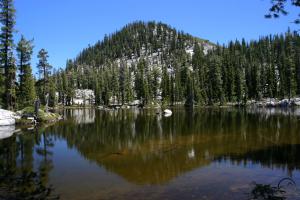 Returning to Lost Lake, it is a short walk to the south to Found Lake, the largest and friendliest (in terms of camping). Unlike Lost Lake, Found Lake is ringed by granite boulders and some small granite benches. It is also larger and deeper than its nearby sibling. Sitting on the warm granite after a dip into the lake is a great option after the climb up to the lakes. Tapie Peak is an attractive backdrop to this pretty lake. Climbing the peak is a simple matter once one has reached Found Lake. Simply hike southeast from the lake and climb the tree covered boulders to the summit. Views from the summit are good, particularly to the southeast where Ycatapom Peak (lovingly called Y-cat by Trinity Alps fans and climbers). Considering the proximity to the trailhead, relative lack of elevation gain and number of lakes around the mountain, Tapie Peak is without doubt one of the easiest peaks to climb in the Trinity Alps.

When it is time to return to Boulder Lake, one has a few choices. First is to return the way one came. The second, longer option is to drop down to Tapie Lake. From the lake, continue east from the eastern end of the lake and then descend the granite boulders down toward the creek and intersect the Tracy Trail. If time is a factor, the quickest option is to return to the view point near Lost Lake and then make the descent from there, scrambling over the large boulder field that blankets the lower flank of Tapie Peak. Though this option bypasses the scenery at Tapie Lake, it ultimately descends the same route, reaching the Tracy Trail at the same point. Fortunately, there are great views of Mount Shasta, looming far to the east beyond Mount Eddy, as well as good views of Billys Peak, one of the Trinity Alps’ great, underappreciated peaks. Whichever way one returns to Boulder Lake and onward to the trailhead, The trip to Boulder Lake and beyond to its trio of smaller lakes is a fantastic hike.

From Mount Shasta City, drive north on Interstate 5, through the town of Weed. Exit at the Edgewood/Stewart Springs exit. Turn left and drive under the freeway, then turn right onto Old Stage/ Old 99. Continue north for a couple hundred yards and then turn left onto Stewart Springs Road. After 4 miles, Forest Service Road 17 splits off to the right. Continue on this road for 22.7 miles, passing PCT Parks Creek trailhead and descending down the canyon of the Trinity River. At the intersection with Highway 3, turn left and proceed 12 miles to the signed turnoff for the Boulder Lake Trailhead. The turnoff is 0.3 miles south of Coffee Creek. Proceed on this road, titled 37N52, for about 3.5 miles. Turn right onto 37N53 and continue 7.5 miles to the trailhead.