A trail accessing a gorgeous and isolated lake basin above the South Fork of the Sacramento River. 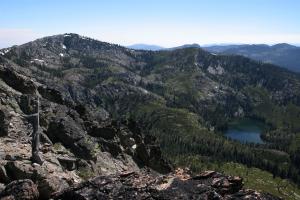 Looking up at the Trinity Divide from the town of Mount Shasta, one could be forgiven for not thinking there were many rugged and beautiful places in what seem to be a heavily wooded set of ridges. Fortunately the Trinity Divide only presents its tamer profile to the town, hiding its many wonderful lake basins and craggy cliffs and peaks. The Gray Rock Lakes are a great example of this. The peaks, Gray Rock Dome and Harry Watkins, look mildly craggy from town but once on the west side, heading up the South Fork Canyon, just how craggy they are becomes more apparent. Nestled below these peaks are the beautiful Gray Rocks, the only complete lakes basin within the Castle Crags Wilderness. Gray Rock Lake, along with Upper Gray Rock Lake and Timber Lake are all lined with impressive gneiss cliffs and are deep alpine pools. The short Gray Rocks Trail accesses the lakes and provides access for routes climging Harry Watkins and Gray Rock Dome. The ascents of the two peaks are something of a split personality. The first half of the trail is a mile of easy trail climbing at first and then descending in the Gray Rock Lakes Basin. Depending on which peak you are climbing, the second half of the trail, is either a difficult bushwhack followed by a rapid ascent up a steep talus pile or a scramble up a steep granite slope. In spite of the difficulty involved with reaching the summits, the route is blessedly short and offers huge rewards for the effort. Views abound in all directions, encompassing the Castle Crags, the Gray Rock Lakes Basin, the Eddy Range, Mt. Eddy, Black Butte, the northern California Cascades, including Goosenest and Willow Creek Mountain, Mt. Shasta and the Strawberry Valley, which contains the community of Mount Shasta City. All of this can be had relatively quickly, following a consistently scenic route and virtually guaranteed isolation. 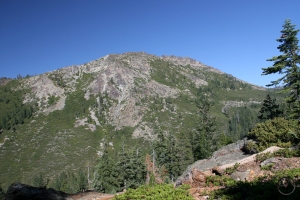 Gray Rock Dome highlights the beginning of the trail.

The Gray Rock Lakes Trail is a fairly easy matter. The trail heads directly to Gray Rock Lake and then climbs briefly to reach Upper Gray Rock Lake. In many ways, the trail is much easier than the drive into the trailhead. If driving a low clearance vehicle or unfamiliar with negotiating difficult dirt roads, it will be necessary to park a quarter mile below the trailhead and hike to the beginning of the trail. The Gray Rock Lakes Trail is fairly level near the trailhead. The trail is slung on the slopes of a deep canyon and Gray Rock Dome looms ominously across the gorge. After 0.01 of a mile, the trail begins to climb steeply. The steep pitch is mercifully short and levels off swiftly. Earlier in the season Gray Rock Creek can be heard crashing through the canyon far below. Later in the year its volume decreases significantly. As the trail advances, views of Harry Watkins and the southern cliffs of the cirque containing the Gray Rock Lakes come into view. 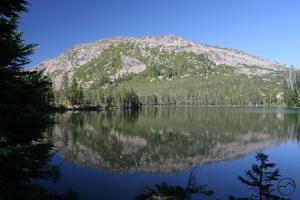 Soon the path begins descending into the lakes basin. Large Gray Rock Lake becomes visible as the trail descends toward the shore. The large lake sits in a rocky bowl with cliffs linging the southern and western shores. Though the actual summit of Harry Watkins is obscured by a low ridge, most of the peak’s rocky mass can be observed from the lake. Even better, the bulk of Gray Rock Dome forms a fine backdrop to the east. A trail splits off to the right and skirts the lake’s western shore. This trail continues along the shore of the lake, rounding the lake to the west. Though there are some rocky patches, it is possible to completely circle the lake. The Gray Rock Lakes Trail turns left at the junction with the lakeshore path, angling toward Gray Rock Lake’s outlet. Several good campsites are passed, although the best is on the east side of the outlet. A large fire pit marks the site. 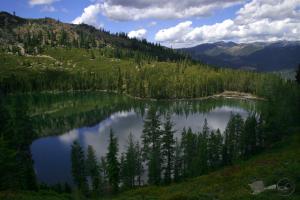 Once on the east side of the lake, a small ridge begins to rise above the lake. The ridge is covered with Huckleberry Oak and at times can obscure the trail once it departs the lake shore and begins climbing. The Gray Rock Lakes Trail climbs above Gray Rock Lake while a spur continues around the lake. The fork is difficult to find if the ground cover obscures the trail. No sign marks the junction. If one misses the junction and continues around to the southern shore of Gray Rock Lake, then the junction has been missed. Simply backtrack watching closely for the fork.

Once one begins climbing up the ridge above Gray Rock Lake, the trail becomes more apparent. About 100 yards from where the trail begins to climb the trail reaches another unmarked junction. 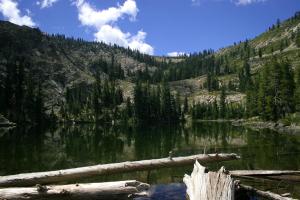 To reach Upper Gray Rock Lake and to climb Harry Watkins, continue up the trail, staying to the right at the junction. Soon the path tops out at the north shore of Upper Gray Rock Lake. The lake is a classic alpine lake, nestled in a large, high cirque below the summit of Harry Watkins. This is one of the prettier spots in the Castle Crags Wilderness. To climb to the summit of Harry Watkins, stay to the right, skirting the western side of the lake. At the other end of the lake, scramble up the rocky slope, angling for the gully filled with trees. Follow the gully to the ridge, which leads to the summit. There is a substantial amount of brush on the ridge which means miserable going. Nonetheless, the route is straightforward and the brush does not last too long before the summit is achieved. 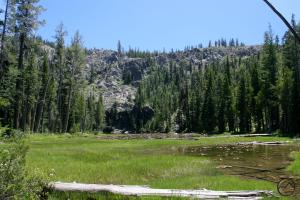 Meadow at the outlet of Timber Lake.

To reach Gray Rock Dome, stay to the left and descend down the ridge. The more obvious trail continues to the right, climbing up to Upper Gray Rock Lake and the route leading to the summit of Harry Watkins. The less obvious trail descends to the outlet of Timber Lake. The northern portion of the lake is marshy and has some excellent meadows. The southern part Timber Lake is deep with a gneiss headwall dropping directly into the cold waters. It is a pretty attractive spot, especially later in the season. The meadow drys out enough to make an nice campsite and the lake and cliffs are just a stone’s throw away. Of the three lakes in the Gray Rock Lakes Basin, Timber Lake gets the fewest visitors. 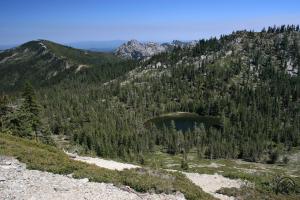 Cross the meadows at Timber Lake’s outlet and enter the dense woods. This is the most difficult part of the route to Gray Rock Dome. No landmarks are visible and the ground is uneven and littered with numerous snags that require climbing. The best way to successfully navigate this section of trail is to maintain a route that is angled 45 degrees away from the outlet of Timber Lake. Maintaining this course will keep one roughly parallel to the base of Gray Rock Dome although this is no visible through the trees. Soon this route reaches the base of a short set of cliffs that are about 25 feet high. Climb the cliffs and follow their rim south. From here an extremely faint use trail can be found. This path leads up to the saddle that separates Gray Rock Dome from Harry Watkins. The top of the saddle is surprisingly fertile, with a fair amount of grass and a small tarn. To the east, one can see Mount Shasta,  lonely Scott Lake, Castle Peak and the Castle Crags. Scott Lake, one of the loneliest lakes in the area, receives almost no visitors.

From the saddle the route to the top of Gray Rock Dome is obvious. One simply has to climb the steep slope to the craggy summit. It is better to stay to the west side of the ridge, since doing so will avoid some bushwhacking. Once the crags at the top of the mountain are reached, continue along their base to the true summit. 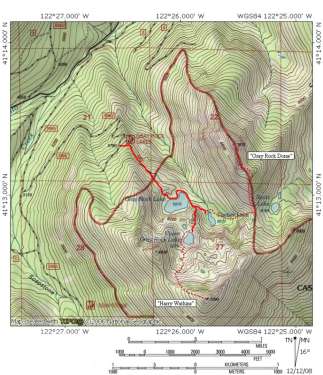 Mount Shasta seen from the route up Gray Rock Dome.

From the town of Mt. Shasta, head west on W. Lake, crossing over I-5. At the stop sign, turn left onto Old Stage Road. After 0.25 miles, veer right onto WA Barr Road. Continue south, crossing over the dam that impounds the Sacramento River and forms Lake Siskiyou. From the dam, continue 9 miles to the west, passing the lake and continuing up the Sacramento River. After 9 miles, turn left, crossing over the Sacramento River on a Forest Service bridge. Veer left after the bridge, then make a sharp right hand turn onto Forest Road 39N45. The well-maintained dirt road may not be signed, but it is hard to miss. It parallels the river for 1.25 miles before intersecting Forest Road 39N41. At the intersection, turn left onto FR 39N41. Again, this road may not be signed, but the level of wear on the road makes it obvious which way is correct. Continue up the road for 1.2 miles. At this point the road’s condition degrades dramatically and those with sedans or who are uncomfortable negotiating steep, severely eroded routes should park here and hike the 0.25 miles to the Gray Rock Lakes trailhead. For those with 4×4, simply continue to the trailhead.