The Cinder Cone is a remarkable landmark at the southern end of the Cascade Range.

It was cold and snowy today and while my kids were out building snow castles for their dragons, I thought I might write about one of the vintage maps I have in my collection. Last year I came into possession of a number of great digital maps from the 19th and early 20th centuries. Most of these covered the Mount Shasta area and revealed all sorts of interesting historical, topographical and geographic facts. I tucked those maps away, planning to write about them over the winter. However, today I am not going to write about one of those. Instead, I want to focus on one of the maps I saw at a friends house earlier this week. He has a phenomenal collection of maps, though his are the real thing, hanging on walls or filed in his extensive set.

The one in particular that caught my eye was one of California from 1926 that should all the railroad right-of-ways that existed at that time. While the entire map was fascinating, what specifically caught my eye was the boundary of Lassen Volcanic National Park and the presence, in the northeast corner of the park, of a separate entity labeled as Cinder Cone National Monument. This national monument has always been a subject I found quite interesting, not only because it encompasses my personal favorite part of the modern Lassen Volcanic National Park, but also because the area, which was initially held in esteem high enough to be preserved on its own merits, separate from but contemporary with Lassen Peak itself. 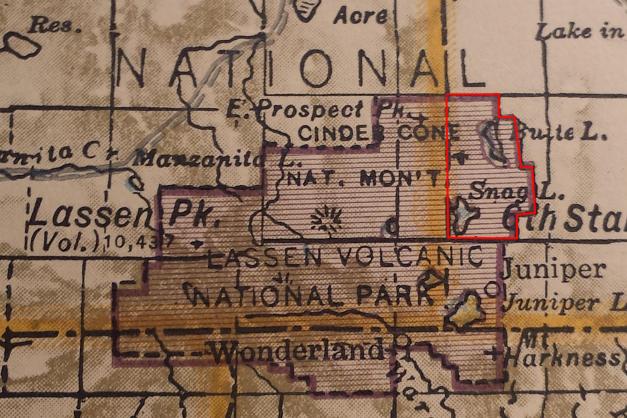 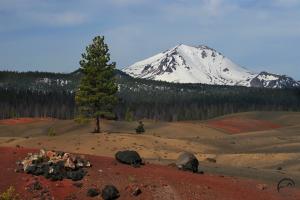 This was the case until 1914, when Lassen Peak began a series of eruptions. A year later the volcano let loose a major eruptive event that was visible throughout much of the North State. Lassen Peak continued in an active state until 1921, when the eruptions finally ceased. However, in 1916, a year after the major eruption, congress created Lassen Volcanic National Park. It took the two existing national monuments and combined them into the single park that we enjoy today. What was once Cinder Cone National Monument became the northeast corner of the new park.

Despite being of such significant beauty and geologic interest that it warranted the establishment of a national monument, the Cinder Cone area is a lonely backwater of Lassen Volcanic National Park. The western half that focuses on the high country and geothermal features around Lassen Peak is easily the busiest part of the park while the southern section, with good access from Chester and the Lake Almanor area sees a steady flow of visitors. In contrast, the Cinder Cone area is near no population centers and requires many miles of driving along a dirt road (which is well maintained and easily passable in a normal car).

Even though it is the loneliest part of the Lassen Volcanic National Park, it is easily one of the most beautiful. The area does not lack for activities either. There are many miles of trail to fascinating geologic features and passing through remote and beautiful backcountry. There are lakes to explore, peaks to climb, vistas to enjoy and large campground from which to base all these adventures. Though Cinder Cone National Monument may have been absorbed into the larger park, the area it was intended to protect still commands attention and admiration to this day.