A Spectacular Week Around Mount Shasta

A stunning lenticular cloud coalesces around the summit of Mount Shasta.

Christmas is nearly a week behind us and it has been a fun week of heading out on a few early mornings and some beautiful afternoons to capture the sunrises and sunsets. This was made all the more satisfying because I got to try out the new zoom lens that my amazing wife blessed me with for Christmas. My old lens was nearly worthless in a variety of ways and my wife finally decided to put it out of its misery and she gifted me a significant upgrade. I am most grateful and was glad to put it to good use. I have already captured a number of images that allow me to see detail heretofore unimaginable with the old sad lens.

Below is an example of how much better my new lens is. Compare the image with those found on this post from October, describing my wife and son’s assent of Black Butte. Click on the image to enlarge it and really get a sense of the detail. 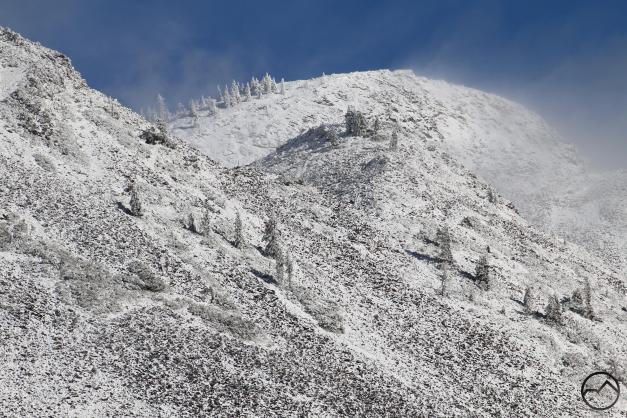 The image was taken from my front yard. The old lookout tower foundation is clearly visible. The snow and rime ice on the trees shows up with excellent clarity. It is like a whole new world has been opened up.

I quickly put the new lens to good use and captured some awesome color from some sunrises and sunsets:

This was not an especially amazing sunrise but it was the first opportunity I had to get out and use the new lens. The clarity and crispness of the image is far greater than I had the ability to do previously. 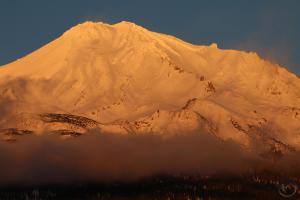 It was extremely cold and windy around the mountain. While watching the sun set, geysers of wind-blasted snow kept erupting off of Sargents Ridge. It was an exciting sight. 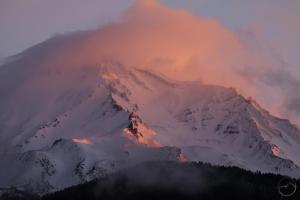 Friday night was when things tarted to get really interesting. A lenticular had been threatening to form over the mountain all day but in the evening it started to gain a lot of definition. I headed north to the Shasta Valley and was extremely pleased that I did. The stack of disks on the mountain had been joined by a nice pair of lens shaped clouds floating off to the west of Mount Shasta. The sky burned as the sun set and the entire scene was magnificent.

Satisfied, I headed home, though I had a suspicion that the next morning would yield another spectacular image. The air just felt like Mount Shasta wasn’t done putting on a show. I made sure to be up early in order to maximize the potential lenticular display. I had originally planned on heading for the perch up near Castle Lake but as I drove past Lake Siskiyou I saw the water was still. It has been a long time since I have gotten a decent reflection there and I could not resist heading down to the water. I am glad I did!

I initially like the one on the right better but now I am leaning toward the earlier image, on the left.

The image at the top of this post was taken at the same time. I am amazed at how much detail on Mount Shasta I was able to capture even though I was 10.5 miles away. Every aspect of this sun rise was fantastic!

Although a single, large lenticular had formed south of Mount Shasta that afternoon, I decided to forgo trying to capture it at sunset, as I had lots of family still at my house and I we were having a merry time. Nonetheless, the next morning on Sunday, I once again headed out to capture the sunset. This time I headed over to McCloud and enjoyed the sun light illuminating all the crags of the Mud Creek Basin. This is the best perspective on sunrise!

The day eventually got overcast and a large stack of lenticulars once again formed over Mount Shasta. I determined to set out around sunset and see if there was enough light to capture the clouds in their glory. However, by the time I was in a position to photograph the mountain, conditions had changed considerably. It was still glorious. 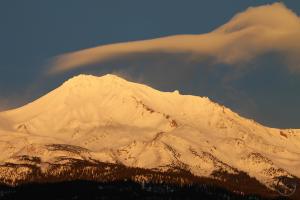 Though not the large set of disks, the single current of cloud was quite elegant and beautiful. 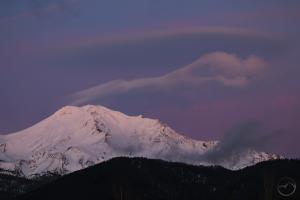 With the late-forming lenticular lingering late into the night, I thought there might be a chance for another big display this morning. I headed out extra early only to find there were no clouds on Mount Shasta. However, as I was about to get on the freeway in Weed, I saw a MASSIVE meteor descend through the sky to the southwest. It lit the sky up and I could see the smoke plumes in its contrail. It was 6:50 AM and I have no idea where it hit but it was big. After seeing that and all the grandeur storming around Mount Shasta for the last week, I feel very small.