Solstice Sunrise / Why I Am Excited To Drive Across The Plains

Sunrise on Mount Shasta on the summer solstice.

No doubt everyone is aware that today is the summer solstice. I was up early once again so I headed out to watch the sunrise on Mount Shasta one more time before heading east on my family’s roadtrip. With no clouds in the sky to create an interesting scene above the shadow-cloaked west side of the mountain, the eastern side was the natural place to go. I didn’t have time to swing all the way around to the east before the sun came up but I did make it to the south side, where i could see the crags of Sargents Ridge catching the morning light. There was not a lot of color but there was plenty of snow. Rime ice on the summit and the blue ice of the Konwakiton Glacier were also visible. I’ll catch one more sunrise on the mountain tomorrow, but this time it will be from the PCT vista point on the Hat Creek Rim while on our way east to catch Highway 50 across Nevada. 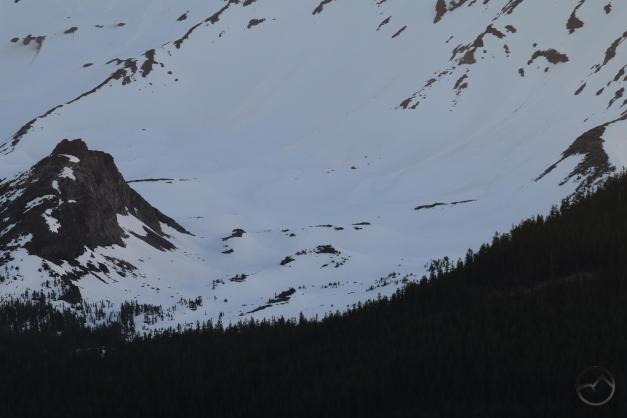 Speaking of snow, this is how the Old Ski Bowl looked on the solstice. There is a heap of snow still up there. I would not be surprised if the road up there doesn’t open until early August. Nonetheless, whoever hikes up to the bowl when that snow starts melting in earnest is in for a treat!

Aside from the solstice sunrise, I wanted to spend a few moments considering my anticipation of driving my family across the plains. Even though we will be visiting several national parks and other spectacular spots and making a few crossings of the Rockies, one of the things I am most excited about on this trip is driving my family across the Great Plains. 15 years ago I would never have thought I could make such a claim but it is true. This is rooted in my time in Texas and exposure to different kinds of beauty. I have written about this a little bit but for the last few years it is a theme I have wanted to expand on but never seem to have the mental energy to sit down and really do my thoughts justice. Nonetheless, the subject of beauty and where and what it looks like is something I am keenly interested in. I am particularly keen on the intangibles like how wildness alters one’s perception of what is and is not beautiful.

The Wichita Mountains, an island of rugged terrain in the sea of the High Plains.

Another feature of the plains that I have great affection for is the seemingly “hidden” place of surprising topography. These features are principally buttes and canyons but there are also punctuated plutons like Vedauwoo and the Wichita Mountains. The latter is particularly dear to my heart, as it was my refuge during my four year exile to Dallas. Despite my acquired affinity for the vast expanses at the center of our country, I was surprised at how few images I have collected. Most of the ones I do have are from plains canyons like the Palo Duro or Mills Canyon in New Mexico. Those places, rightly thought of as “mountains in reverse” are epic not just for their intrinsic beauty but also for the sudden and unexpected nature of their advent as one move across the horizontal yellow.

Anywhere in the great expanse…

Hopefully, when I return I will have a few more images of the great prairie that lies at the heart of our nation. I know I appreciate them more now and will be more deliberate in capturing their beauty when the opportunity arises. Of course, there will be plenty of other places like Moab and the Beartooth Mountains, places of immense beauty, on our trip. I am excited to have the opportunity to expose my kids to the great world with which we have been gifted and blessed with.