Thirty-Five Hours In The Evolution Of A Mount Shasta Lenticular 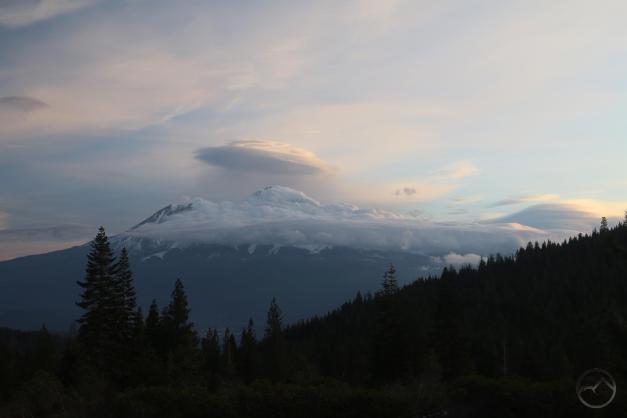 A lenticular cloud above Mount Shasta presages a coming storm.

The winter of 2019-20 got off to a good start, with a large snow storm early and some consistent precipitation throughout December and January. The latter month ended with another good snow storm dropping upwards of 2 feet at the lower elevations. Since then, however, February has been brutally dry and pleasantly warm, a combination that has left the snowpack in a reduced state as we advance toward spring. Consequently, it was with anticipation that I had been watching the approaching storm system in the forecast. It looked as though we would finally get some much needed precipitation. Of course, the shift from a warm, dry weather pattern to a stormy one also presented a high likelihood of a lenticular forming over Mount Shasta and heralding the coming change in the weather.

With clouds predicted to gather Friday (March 6) and snow and rain promised for Saturday, it looked proper for a good cloud to manifest. I did reckon that Thursday would be the first indication that a cloud may appear and, not surprisingly, this was the case. Interestingly enough, it arrived Thursday morning, persisted throughout the day and through the night and on into Friday. It was still there as the clouds closed in and the storm finally arrived in the afternoon. While interesting, it never rose to the high level of a great lenticular event but it was still a fascinating spectacle.

The following images track the formations development over a roughly 35 hour period.

Thursday afternoon: the disk persisted throughout the day. In the afternoon it lost its shape a little bit as the forces that formed the cloud seemed to weaken a little.

Thursday evening: after the sun set, the conditions changes and the cloud lost a lot of its integrity. 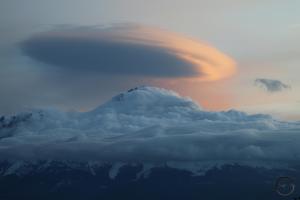 Friday morning: Mount Shasta itself was blanket with a layer of cloud that also had wavy, lentiuclar-like form.

Friday midday: the clouds on the mountain finally expanded, covering the area. A break, however, provided a glimpse of the disk still above the mountain.

Friday afternoon: the clouds around the mountain cleared but now the sky was overcast and the storm nigh. Still, the lenticular held its position east of Mount Shasta, soon to be swallowed up as the precipitation commenced.

It’s snowing at my house now. A couple of inches fell during the night. I give thanks for it.