Rime Ice Aglow And A Fresh Layer Of Snow

Saturday afternoon saw a great lenticular formation. It was possibly the best that has occurred thus far this season, though it was not a particularly epic one. Rather, it was a complex weave of small cloud tendrils fixed over the summit of Mount Shasta while large plumes lofted to the south. Unfortunately, I was not able to capture an image of the formation, since I was selling Christmas trees with the Boy Scouts. Instead, I had to watch the cloud in between cutting trees and tying them onto cars. Such is life sometimes and, even missing the cloud, I have gratitude for having witnessed it. There are few sights that make a finer backdrop to selling Christmas trees!

Once we closed the lot, I stopped on my way home and still managed to capture an image of Mount Shasta before the light totally slipped away. Frustratingly, the cloud had collapsed and there was little interest left in its form.

The last vestiges of a once excellent lenticular fade into darkness.

I was hopeful that the morning might bring a renewed lenticular and a spectacular sunrise. I got up early and, striking out to the north, it was evident that it had rained in the night. At first I was concerned I would not even see the mountain because the cloud cover was so thick. However, as I approached the Graham Lava Flow, the clouds melted away, revealing a clear, cloudless sky high above Mount Shasta. I had been passing through low-lying pea soup that was sitting in the valleys. Higher up, there was little of interest over the mountain. I went from concern I wouldn’t see anything to concern there wasn’t “anything” to see. Not that an enormous, 14,000 foot volcano isn’t anything to see.

In the darkness, it looked like some snow had fallen at higher elevations and that, by heading up onto Herd Peak, I would be able to get into it. With little in the sky to accentuate a picture, this seemed the best course of action. Upon arriving at one of my favorite vantage points on Herd Peak, it was quickly evident that there was only a small amount of fresh powder on the ground but the trees were encased in crystalline rime ice. This type of ice forms on objects as clouds passing through them when temperatures are freezing. Bits of cloud freeze onto the branches (or whatever else happens to be sticking up into the cloud). From far away, rime ice can look like snow but it is usually form-fitting to trees rather than piling up like white pillows. 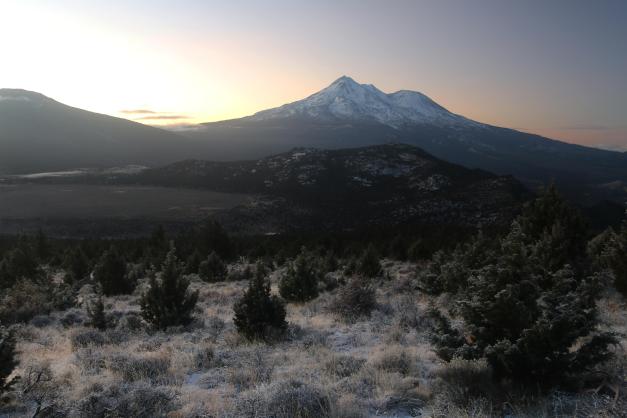 As I waited, I watched the low clouds I had driven through swirl around Black Butte and Mount Eddy far to the west. Every now and then, the summit of Mount Eddy would break through the dense blanket and catch a bit of predawn glow. Other than that, there was little in the sky, a far cry from the intricate lenticular from the previous afternoon. While I waited by my camera in the freezing cold, I noticed I was being silently watched by three cows and a calf. I had not expected company of that sort but enjoyed their presence while they observed me for 5 minutes or so. They wandered off just as the sunrise began in earnest. As the sun finally neared the horizon, Mount Shasta began to glow. Then, as the sun cleared the horizon, the high desert forest in front of me suddenly exploded into a glittering arid jewel. The snow on the grasses and the rime ice in the trees lit up and seemed to radiate their own brilliance. With Mount Shasta presiding majestically above this glorious scene, it was a most satisfying sunrise.

A sparkling Mount Shasta sunrise. It was not warm.

It though I did not feel sated, it finally seemed like time to pull myself away from the view and begin to head back home. As I headed off Herd Peak, I kept finding more reasons to stop and capture a few more images. An interesting snag or a nice cluster of sagebrush might be the key to a perfect scene and I have been pushing myself to try different perspectives than the ones I normally fall back on. Most don’t work out but occasionally I hit on something. 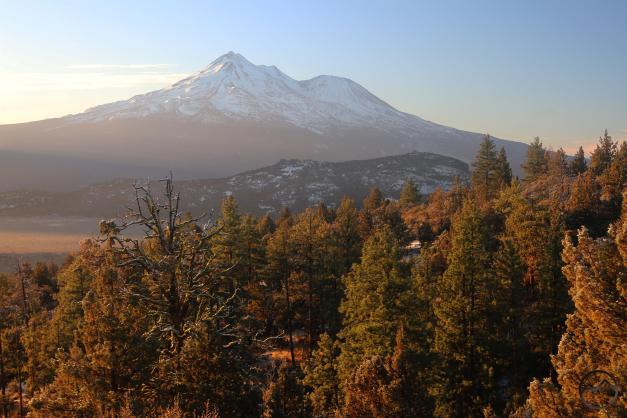 Not quite something, but I am trying.

As I drove home, I was quite pleased with how the morning had turned out. It was not the epic lenticular morning I had desired but it was a beautiful morning in spite of this. I have been getting frustrated by the generally clear sky over Mount Shasta and wanting more weather to make images more interesting. I had really hoped this would be the morning for something special, and it turned out it was, just not the way I had anticipated. As they say, you can’t always get what you want, but sometimes you get what you need.