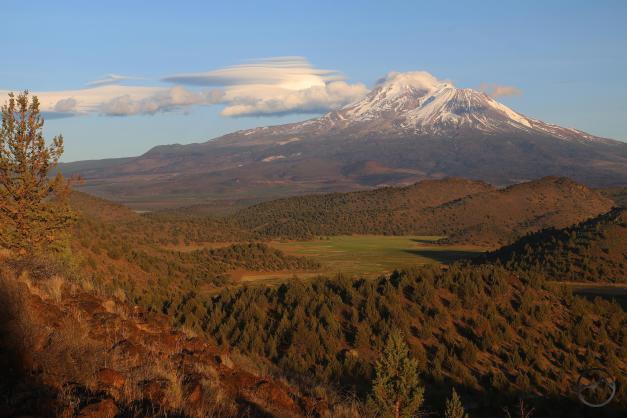 A lenticular cloud hovers next to the cloud-capped summit of Mount Shasta.

Last week I was finally able to get out to Truchas Ridge and work on some trail construction. We want to keep it as natural as possible and cross country travel is easy there but I still want a few trails to lead through some of the highlights. In particular, my wife and I want a trail that runs from the base camp at Puerto Nambe to the collection of vistas at the east end of the ridge, Artist, Panorama and Pecos Points. The hardest part of this project was building a path up a 20 foot talus slope that consisted of large boulders. After a couple days’ work, I was rather pleased with the rock stairway I had constructed. The steps are stable and don’t stand out against the rest of the talus. All in all, not a bad job.

While out there working, I was able to catch two sunsets on Mount Shasta. The views are spectacular and these turned out to be spectacular sunsets, the latter of the two in particular.

Mount Eddy’s broad massif rises above the hills of the Shasta Valley.

Evening light highlights the Whaleback. I liked how the shadow ended at the burn line from last year’s Lava Fire. 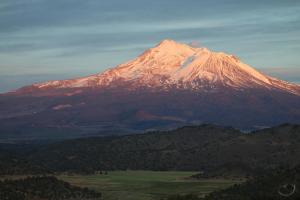 Alpenglow illuminates Mount Shasta. None the clouds lit up but the mountain’s glow was great on its own.

The moon rises high above Mount Shasta. It was obscured by clouds until this moment, when it emerged from behind the clouds.

Three days later, I returned to the ridge to work on the trail and fix one of the gates. When I was done working, I hiked out to Artist’s Point again, this time joined by a friend. We enjoyed another excellent sunset. As an unexpected treat, this time Mount Shasta and the entire Shasta Valley was graced with several lenticular clouds. It was awesome! 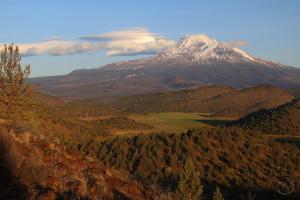 The top of the lenticular lit up with alpenglow but the rest of the stack was unlit. Nonetheless, a beautiful scene. 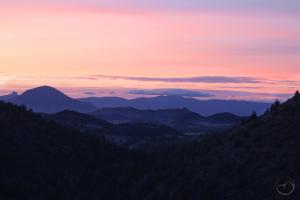 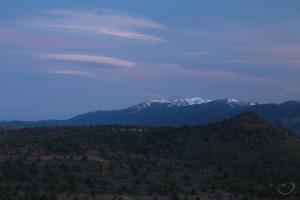 With all the light faded, lenticulars were still observable all around the Shasta Valley. These clouds were arranged above Mount Eddy.

With the light gone, I made my way back to my jeep at Puerto Nambe. Dusk is one of the prettiest times on the ridge. Typically, a light breeze picks up and the coyotes start to howl. It’s magnificent.

One interesting thing from this trip was how obvious the spring snow’s melting was. The first sunset was on a largely white mountain. All the precipitation from April and early May made Mount Shasta look a hopeful white.

Three days of temperatures in the 70’s made short work of the light layer of snow.

There is still a fair amount of snow on the mountain above 9,000 feet. Still, it should be much, much deeper than it is. Despite its auspicious start, this was not a great winter. In spite of the dry conditions, I hope this will be a good summer. May the Lord make it so!