A short but steep hike up the side of the Goosenest, an old volcano with a large crater and one of the finest summit views in the Mount Shasta area.

Mount Shasta seen from the summit of the Goosenest.

Though it is not readily apparent, Mount Shasta does not actually lie on the crest of the Cascade Ranges as it extends northward through California into Oregon. Instead the massive mountain is well to the west of the central part of the range. This leaves other, lower peaks to populate the Cascade high country. Lying to the north of Mount Shasta, the Goosenest is one of the tallest, most scenic and most interesting peaks in the California Cascades. Yet, for all the superlatives, it is not a particularly well known mountain. While this is surprising considering how prominently visible the mountain is from Interstate 5, it is in an area that sees very little recreational use and requires a fair amount of travel to reach the high country despite being so close to Mount Shasta and other population centers. This leaves the Goosenest and other parts of the Cascade Crest seldom traveled and ripe for exploration. For those who do venture up into these mountains a great feast of nature awaits, particularly on the Goosenest. The lower flanks of the awesome peak, an old shield volcano, are blanketed in magnificent forest of red fir, white pine and hemlock. The higher portions of the peak are essentially a large cinder cone while the entire western side of the mountain is covered by a massive lava flow. As dramatic as the mountain is, it is exceeded by the transcendent view from the summit. Most of the prominent features of Siskiyou County are visible from the top, including distant peaks such as Preston Peak and the Red Buttes far to the west in the Siskiyou Mountains. Needless to say the view of Mount Shasta alone is worth the hike. 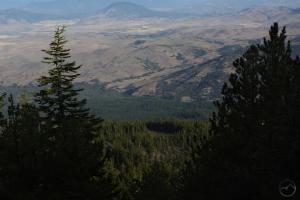 Gazing down on the Shasta Valley from the trail.

From the trailhead, the Goosenest Trail sets out to the west through an old growth forest. The ground is littered with quiets a bit of forest detritus with downed trees and broken branches scattered about. The old trees themselves are excellent specimens and are quite a departure from the logged out areas hikers had to drive through to reach the remote trailhead. The path begins to climb almost instantly and the grade does not let up until the very top of the mountain. Still, the attractive forest makes the climb a little more palatable. Roughly 0.1 miles from the trailhead the trail climbs up a short series of switchbacks before straightening out and continuing the westward trajectory. Here the trail narrows considerably. Soon breaks in the forest become more frequent and it soon becomes possible to observe some spectacular views to the north. It comes as a bit of a surprise how high up the trail already is and there is a sense that the flanks of the Goosenest fall away pretty rapidly to the floor of the Shasta Valley over 5,000 feet below. A large mountain rises to the north, separated from the Goosenest by a deep canyon. The peak is Willow Creek Mountain, one of the volcanic summits prominently visible from I-5 while it parallels the Cascade Crest.

Awesome view from the lava vista.

As the trail continues to climb, it soon reaches yet another and larger series of switchbacks. These are about 0.3 miles from the trailhead. The trail again resumes its westward trajectory, rapidly climbing the northern slope of the Goosenest. A few more sporadically placed short switchbacks eventually deposit hikers on a level bench 1.1 miles from the beginning of the hike. Here the trail turns to the south. To the right there is an obvious pile of large boulders just beyond some trees. A short scramble out onto these boulders leads to a prominent point that is actually the top of the great lava flow that smothered the Goosenest entire western side. This point has a tremendous view of Mount Shasta, the Shasta Valley and the many peaks of the Klamath Mountains to the west, including high peaks in the Trinity Alps and Marble Mountains. This view alone is almost a worthy destination on its own but considering how close to the summit it is, it is worth the effort to finish the climb. 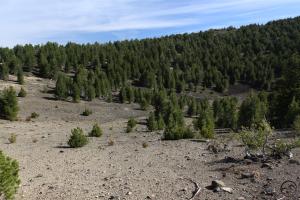 The interior of the Goosenest crater.

Returning to the trail, the path soon begins to climb again, this time more steeply than ever. Switchbacks quickly become the rule here as the trail makes its final push up the side of the mountain. As it climbs the soil gets looser and the tree cover much thinner. The Goosenest’s cinder composition becomes more obvious and it is soon apparent the trail is not climbing to the summit of the mountain but rather the rim of a massive crater. As the trail finally levels off after climbing 0.2 miles from the vista point, the interior of the crater itself becomes apparent. Though there are some trees in it now it does not take a lot of imagination to picture this mountain erupting. Follow the trail to the right to a trail junction. The path to the right is an the old Joe Rath Road, the former route to the top of the peak that began at a cinder pit on the south side of the Goosenest. Stay left, passing a pile of rocks that form a wind barrier. The trail climbs again, but the grade is moderate and the trip along the crater rim and the views make it easy going. It is still 0.4 miles up to the summit but it is all vistas the entire way. From the top a grand view unfolds with Mount Shasta taking center stage. The Trinity Divide, including Mount Eddy, the Gray Rocks and the Castle Crags also demand attention. Many Oregon peaks, including fantastic Mount McLoughlin, the Mountain Lakes caldera, the Crater Lake rim and Pilot Rock are all prominently visible. Like the lower vista, the great Klamath Mountains also vie for the hiker’s eye. It is a marvelous spectacle and one of the finest vantages in the North State. It is possible to return to the trail by completing the loop around the crater rim though the path dissipates after the summit. The travel is easy and the route is obvious. Once back on the main trail retrace your steps to the trailhead.

Mount Shasta from the Goosenest

From the beginning of Highway 97 in central Weed, head east on Highway 97 for 19.6 miles. Turn left onto Forest Road 45N22. At 0.5 miles from Highway 97 stay to the right. At 2.85 miles, stay to the right, continuing on Forest Road 45N22. Brown signs indicating a hiking trail are occasional placed along the route so watch for these to mark the correct path. Stay on this well graded and maintained dirt road for 7.15 miles from Highway 97. At 7.15 miles pass a logging clear cut, turn left onto an unsigned dirt road, still skirting the edge of the clear cut. Another 0.4 miles leads to another fork. Stay left and proceed an the decent dirt road. Stay left again 1.15 miles from the previous junction. The road switchbacks into another clear cut before reentering the dense forest. Once back under the forest canopy, watch for the trailhead on the left, a total of 11.9 miles from the Highway 97.