A ruined footbridge over an unnamed creek somewhere near Mount Eddy.

This kind of infrastructure interests me, both because of its obvious connection to hiking but also because the bridges sometimes represent an effort, and at times failed, at integrating human infrastructure with the natural world. Some bridges, like the Wagon Creek Bridge at Lake Siskiyou offer a more overwhelming collision between those two entities, while others, such as the PCT bridge over Squaw Valley Creek, yield a more peaceful meeting of the man and nature. I think the successes and failures of trail bridge engineering ought to be reviewed so that the mind is focused on what, exactly, ought to be pursued when constructing new bridges for the inevitable (though seemingly distant future) new bridges that will be constructed in the Mount Shasta area (especially the ones to Mossbrae Fallsa and over the Sacramento River, upstream from the inlet at Lake Siskiyou).

Unlike my previous list of bridges, these are not in a particular order. 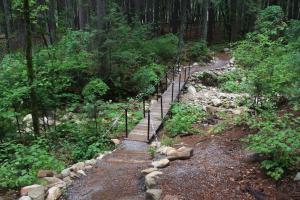 There are two small but interesting bridges over Indian Creek in Castle Crags State Park. The creek starts over 1,000 feet higher up in the Crags, its source a productive spring nestled in a granite grotto. A longer branch originates in one of the must rugged canyons in the Castle Crags. The creek cascades down through a rocky channel until it meets gentler terrain as it nears Castle Creek. The Indian Creek Nature Trail, which connects to the longer Flume Trail, crosses over the creek twice, the pair of bridges are quite different from one another. The first a classic footbridge, incorporating river rocks to build a foundation upon which the bridge spans the creek. The river rock construction helps the bridge blend into its surroundings. The second crossing over Indian Creek is accomplished via unuaully built bridge. It incorporated an iron foundation that is overlaid with short planks. Poles connected to the foundation rise up a few feet on both sides of the planks and are connected via a steel cable, which serves as a handrail. Though simple, it also blends into the natural landscape in an attractive fashion, perhaps because of the subdued design. Together, they make an attractive set of spans that complement the hike on the Flume Trail quite well. 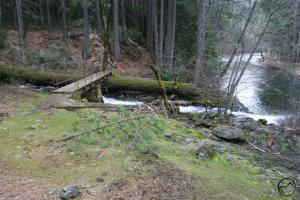 Another bridge located in Castle Crags State Park offers one of the best integrations into the natural landscape I have seen in the Mount Shasta area. This bridge, located on the Sacramento Trail and spanning small but constant Fall Creek, is one of the most scenic sections of this beautiful trail. Fall Creek begins high up on Girard Ridge and tumbles down a remote canyon until it flows into the Sacramento River. It is here, just a few yards above the confluence that the trail crosses the creek. The center of the bridge is supported by a single pier constructed of large boulders. However, the crossing is located at the point where a large Douglas fir toppled alongside the creek. The bridge was constructed over the fallen tree, part of which was notched to provide a stable anchor point for the steel structure. The presence of bridge, tree, stone pier and cascading creek, along with the Sacramento River just a few yards away represents a beautiful harmonizing of trail, bridge and landscape. 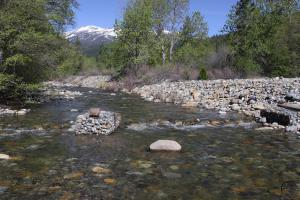 One of the more interesting bridgings over water in the Mount Shasta area are the seasonal bridges over the Sacramento River at the Lake Siskiyou inlet. Installed to provide a crossing for the Lake Siskiyou Trail, these bridges have a surprising tumultuous relationship with the river they span. First, it is important to note that there are two sets of bridges, since the river, at times, is split into two different channels as it enters the lake. However, the course of the river fluctuates and often alter the landscape substantially, making installing permanent bridges difficult. One example of this is how the water has alternated between the north and south channels. Though it had recently been the main course for the river’s flow, the south channel was dry for many years after a large storm produced flooding that blocked up that channel and funneling all the water into the north channel. The same flooding destroyed the gabions that supported the bridge over the north channel, making the bridges’ future location and ever-changing proposition. After a few years of being almost completely dry, more flooding during the thaw of a particularly heavy winter reopened the channel. Read about some of the changes experienced at these bridges here, here, here, here, here, here, and here. It’s pretty amazing how the river continues to mould the land around it. 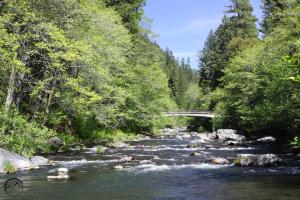 The Pacific Crest Trail’s crossing of the McCloud River is one of the larger river crossings the epic trail makes, especially since its transitioning from the Sierra Nevada to the Cascades. Consequently, the bridge over the river required a larger-than-normal scale of construction. Over 100 feet across, it is among the longest bridges in the Mount Shasta region. However, its length does not mean that it is garish or obtrusive. On the contrary, the simple wooden construction makes the bridge’s presence subtle. It almost appears to just fade into the background, allowing the McCloud River to be the dominant presence. Unfortunately, the road that connects nearby Ash Camp to the McCloud Dam is closed, making hiking across the dam a little more difficult than it once was. If you want to hike this area, park at the dam and walk the 1.25 miles down the road to Ash Camp and then across the bridge. From there the PCT continues to Ah-Di-Na.

Perhaps my favorite bridge in the Mount Shasta area isn’t even a functioning bridge any longer. Indeed, it may have been over a century since this creek was crossed on this impressive span. Located on what was once a significant route over the mountains to connect the Mount Shasta area to the Trinity River and beyond, the bridge has long sience been washed out by massive flooding. It’s simple construction consists of two large trees toppled over the creek’s channel and then covered with large, rough-hewn planks. That such a bridge was built indicates the importance of the route but its lack of reconstruction also indicates that the route eventually fell into disuse as other roads, likely intended for use by cars, became the dominant transportation lines. Now this lost bridge is overgrown and forgotten, except by the very few who try to follow this 19th century route. Its presence next to a small cataract makes the location quite sublime and worth a sit on the large logs to contemplate bygone days and the beautiful setting.