***The northern part of this trail is now on private land and has been fenced off. The southern part is still on USFS land and the minor peaks can still be climbed for excellent vistas.***

An incredibly scenic hike up an rarely climbed butte with 360 degrees of much of much of the Mount Shasta area. Great for hiking during the winter.

The Shasta Valley lies to the north of Mount Shasta, a broad, moderately flat valley between the Cascade crest and the Klamath Mountains. In contrast to the lush alpine forests surrounding the grand volcano, this area is the home of the juniper and sagebrush, making it more akin to the dry, east side of the Cascades in Oregon or the deserts of the Great Basin. Situated at the fringe of these two climates is Yellow Butte, one of several buttes of color that surround Mount Shasta. The only one of these buttes on the north side of the mountain, Yellow Butte is an often seen but seldom traveled peak. The butte is prominently visible from all over the Shasta Valley and particularly conspicuous from Highway 97, which travels directly beneath it. Nonetheless, it generally escapes notice, not because it lacks interesting features, but because it is hopelessly overshadowed by the mysterious Sheep Rock, the Whaleback and, of course, the grand cone of Mount Shasta. Nonetheless, Yellow Butte is an oasis for the outdoor adventurer when the rest of the Mount Shasta area is covered in snow.

The Haystack from the beginning of the Yellow Butte Trail.

In truth, like the neighboring Haystack Trail, the Yellow Butte Trail is an old road. For those that prefer single track, do not let this deter you from hiking these high desert buttes. The roads are old and would be more accurately described as parallel single track. Although they are occasionally driven on, they generally are traveled mostly by those afoot. The opportunity to hike this beautiful area when other trails are snowbound should not be passed up solely on account of the nature of the trail. Some portions of the trail cross private land. It is difficult to determine when one is crossing boundaries. A good rule of thumb is to simply be respectful the entire distance.

Herd Peak and Sheep Rock from the Yellow Butte Trail.

The Yellow Butte Trail begins at a small pull out off of Highway 97. Park off the road and proceed through the gate. The trail climbs very moderately as it rounds the south west shoulder of Yellow Butte. Soon it leaves the sounds of the occasional vehicles on the highway behind and begins the long traverse of Yellow Butte’s flank. The ground drops away from the trailhead steeply so that, rather than climbing from the elevation of the parking area, the trail is swiftly slung over 300 feet above the surrounding area. As the route climbs, first east then turning north, there is a low saddle above the trail. Use trails climb up to this point, which offers a great view of Mount Shasta. As the trail turns north, it climbs above some rugged crags on the side of Yellow Butte. To the west is Haystack, the companion to Yellow Butte, its name obviously derived from its shape. As one hikes, the source of Yellow Butte’s name is also apparent. The high desert climate produces an abundance of golden grass that cloaks the small peak, giving it a golden hue. 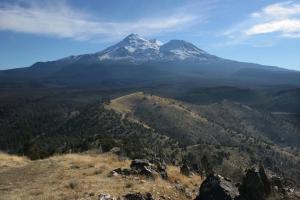 Mount Shasta looms high above the summit of Yellow Butte.

After climbing to the north for 0.25 miles, the trail descends to a saddle populated by junipers. A rough road heads down the east side of Yellow Butte from here but the main path is obvious. It swings to the west, rounding the base of the Yellow Butte’s summit before it switchbacks to the east, climbing moderately as it goes. Soon the trail turns to the north one last time and begins the final ascent to the summit of Yellow Butte. Once on top, a small, rocky plateau is revealed. The views are spectacular. To the north is the Cascade-Siskiyou area, the bridge that connects the Klamath Mountains with the Cascade Range. The most recognizable landmark is Pilot Rock. To the west are the Siskiyous and the Marble Mountains, as well as the northern end of the Trinity Divide, all subranges of the Klamath Mountains. To the east are the peaks of the Cascade Crest, notably the Goosenest, Herd Peak, Sheep Rock, the Whaleback and Ash Creek Butte. Lastly, to the south lies the great mass of Mount Shasta.

From downtown Weed, drive east on Highway 97 for 11 miles. A small dirt road blocked by a green gate will be on the left. Park next to the gate. 9.5 miles from Weed, Highway 97 crosses over usually dry Whitney Creek. Visible ahead is the Haystack with Yellow Butte beyond. The dirt road is 1.5 miles beyond Whitney Creek. Be sure to close the gate at the beginning and end of the hike to Yellow Butte.