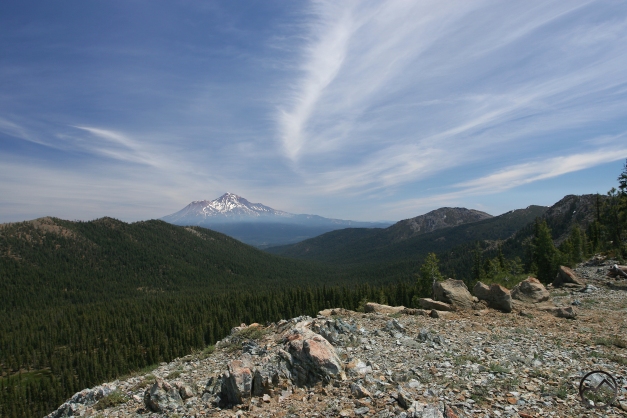 Mount Shasta makes a dramatic sight from near Gumboot Saddle.

This is probably old news to some but I figured I ought to make sure that the news is out there. I confirmed today that both Parks Creek Pass and Gumboot Saddle are open. This has several implications for hikers this weekend and beyond. Most importantly, several fantastic hikes on the Pacific Crest Trail are now wide open and hikable. This includes the Seven Lakes Basin, Porcupine and Toad Lakes, Deadfall Basin and Mount Eddy as well as some trails in the Scott Mountains such as the PCT to Bluff Lake and the scramble up to China Mountain. Each of these is a fantastic hike and worth the time this weekend.

Another implication of the opening of the passes, specifically Parks Creek, is the quick availability of trails in Trinity Alps. The closest to the Mount Shasta area are the hikes to the Bear Lakes and Tangle Blue Lake. Other nearby trails include the routes to Stoddard Lake and to the summit of Billys Peak Lookout. Other destinations can be accessed from some of the trailheads, opening up the possibility of longer backpacking trips. The trails themselves should all be wide open and snow free by this point, so the Trinity Alps are open for business.

With the passes open, scenic driving is also a possibility. The loop up South Fork Road to Gumboot and then around to Horse Heaven Meadow and down into the Castle Creek drainage offers awesome views of the Trinity Alps, southern Trinity Divide and the Castle Crags. Driving up to Parks Creek Pass has awesome views of Mount Shasta, the Scott Mountains, Mount Eddy and the Trinity Alps.

All in all, this is perfect timing for the long weekend. With all the trails opened up (except for those at the Old Ski Bowl), there is more room for everyone to spread out and enjoy the Mount Shasta area without feeling like everyone is on the same trail. It is one of the (few) blessings of a light winter.

One comment on “Gumboot And Parks Creek Passes Open”