The Dogwoods Of Black Butte 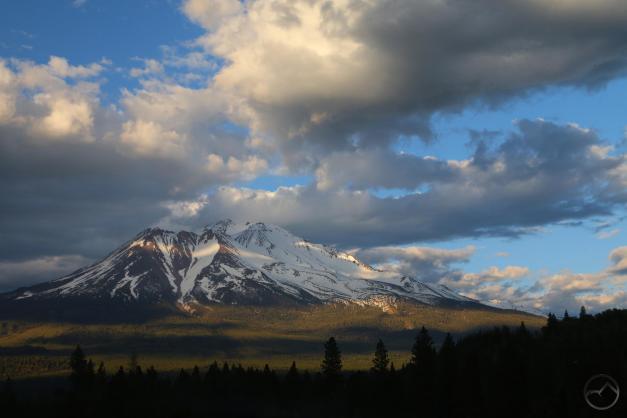 This image of Mount Shasta has little to do with dogwoods or Black Butte but I captured it as I was about to head home from documenting the flowering trees.

I can’t imagine that they have not been there every year, but I confess I have never noticed the dogwoods on Black Butte before. I have lived in my house for almost 10 years now and we have a great view of Black Butte and not once, in the entire time that we have lived here, has my wife or I observed them. However, this year, when they blossomed, it was almost unavoidable, since they stand out so prominently. At first, we thought they seemed too high up on the little mountain to be dogwoods, since that particular tree seems to thrive at lower elevations. This is no doubt a false assumption and repeated viewings removed all doubt from our minds that these were, in fact dogwood trees. Oddly enough, once we observed the plants on the western slopes of Black Butte, I noticed that they were quite common on the north side as well. That shaded side of the mountain seemed to have for more, in fact. Correspondingly, the south side, which gets significant sun exposure, does not seem to have a single dogwood tree on it.

The trees that we can see are obviously large and are not recent growth. Perhaps this has been a particularly showy year for the dogwoods and they have consequently revealed themselves. Other spectacular blooms have been spotted in other areas around Mount Shasta, so it may be that the dramatic blooming this year has finally exposed their presence on the slopes of Black Butte. No matter what the reason, it is subtle but attractive bit of color on Black Butte, a mountain which spring color seemed to have passed by.