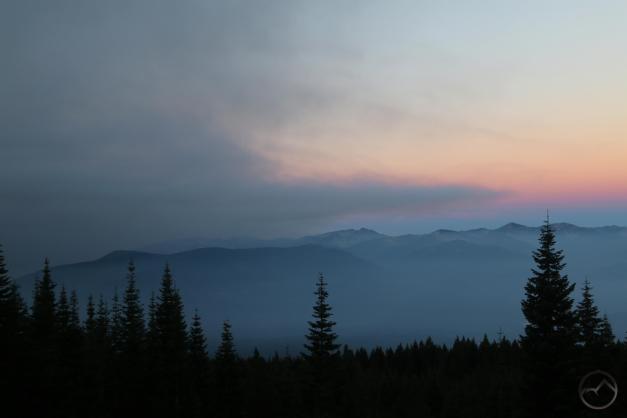 With the Delta Fire still raging through the Slate Creek watershed and growing to a depressing 40,580 acres, I thought it might be helpful to look at some positive developments going on with containing the fire. I want to admonish that all of what I have to say is from my own observation and interpretation of the maps. All the maps are available to the public, though some may be harder to ferret out. I apologize for any mistakes or misinterpretation of the data.

That said, the first thing I want to point out is that though the fire continues to grow, its pace has slowed, giving the firefighters a window to get some assets in place and try to slow the advance. Looking at the fire on Thursday morning compared to this evening is a little reassuring.

Obviously the fire is larger than we would like, but when I went to bed Wednesday night I was expecting things to be far worse on Thursday. Moreover, I figured the fire would have consumed Tamarack Lake by this point and moved further up the Sacramento River canyon as well. As of Saturday night, neither of those two things have happened yet. Both could still be lost to the fire but at least at this point there is a fighting chance to save them and hope yet remains.

Another big blessing was the fact the the Delta Fire erupted in between the Hirz and Carr Fires. That meant that assets were close at hand and, just as important, many fire lines had already been cut. These were contingency lines to contain the Carr and Hirz if they jumped the lines that ultimately checked them. Nonetheless, they could swiftly be manned and brought into play to protect structures and unburned terrain.

One good example of this was at Vollmers, where most of the homes seemed to have been saved. The contingency line for the Carr held the Delta Fire back.

The purple ‘x’ line is a Carr Fire contingency line. The black ‘x’ line is new fire line cut in to fight the Delta Fire.

The lines at Vollmers have been strengthened but and most of the canyon is outside the fire’s perimeter. That would likely not be the case if the contingency lines were not already in place. Unfortunately, the nearby hamlet of Delta has now fallen within the fire’s perimeter, where it had been excluded before. At this point, the fate of the homes is uncertain. Let’s hope they are still there.

Delta now inside the fire’s lines.

Another place where firefighters have made a valiant stand is to protect the homes in the secluded neighborhood of Highland Springs. This collection of houses lies in a hidden area on the west side of the canyon. A fire line was quickly cut in on the south side of the area and, thus far, has managed to hold the flames back. It isn’t exactly containment but it is a significant victory.

Highland Springs if the light colored block above the black ‘x’ line, which notes a fire bulldozed fire line.

The Highland Springs area is part of a really active firefighting area. This is the most critical part of the containment operation at this time. Holding the fire where it is right now will prevent the fire from advancing up the Sacramento River canyon and threatening Sims, Sweetbriar, Castella and Dunsmuir. I reckon this is where a lot of resources are being thrown into the fray. 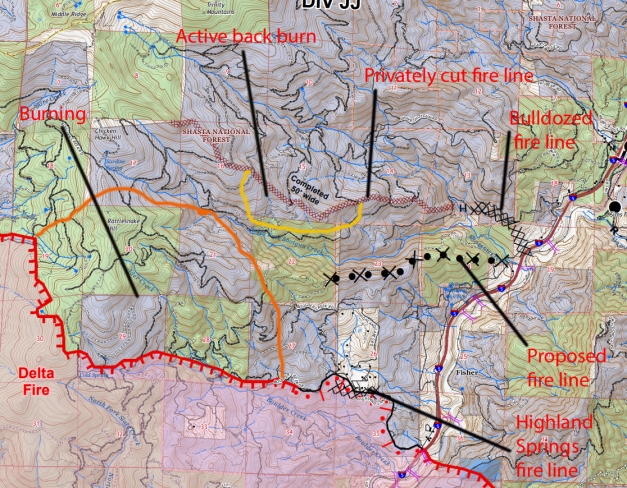 The above map gives a broader picture of some of the firefighting operations that are currently ongoing. There is already a usable fire line cut along Middle Ridge. I believe that back burning operations have already begun there. Not only does this help hold back the fire from heading toward more populated areas, it also helps defend natural places like Tamarack Lake. The rest of the ridge running to west is still vulnerable. Hopefully this is the next area targeted for attack.

We’ll have to see what the fire does tonight before being able to guess what the next stage of containing the Delta Fire looks like. I think there is some factors that give some flickers of optimism at this time. Nonetheless, the situation is still very fluid and the whole effort could go sideways. Let us pray that proves not to be the case.