After Dance Lessons, One Fine Evening In Mount Shasta

The storm that dumped snow and drenched the area in a deluge of rain having passed, today revealed a stark white Mount Shasta. Low clouds drifted through the area constantly and it wasn’t until the afternoon that the skies around the mountain really opened up, but once it cleared, the mountain glittered in the sunlight.

The real highlight came in the mid-afternoon. I took my daughter to her dance class and I had an hour to kill with her brothers before picking her up. As the kids ran around Sisson Meadow, a nice lenticular formed over the mountain. Making the scene even more interesting was the filtered light that gave Mount Shasta a dappled appearance. The light also highlighted a lot of Shasta’s features, especially those around Avalanche Gulch. Snow covered everything and the features that jutted out of the flanks to for the jagged landscape were thickly coated with rime ice.

Click and enlarge this one to see the detail.

After picking my daughter up, I thought it might be good to head north and check out the sunset from the Shasta Valley. The storm has resuscitated one of my favorite sunset spots where, during wet winters, it is possible to get reflections of the mountain when the wind is not blowing. Unfortunately, the wind is often blowing in the valley and this was the case tonight. Even more frustrating, the lenticular had faded into an uninteresting splotch in the sky. There would be no distinctive sunset tonight. 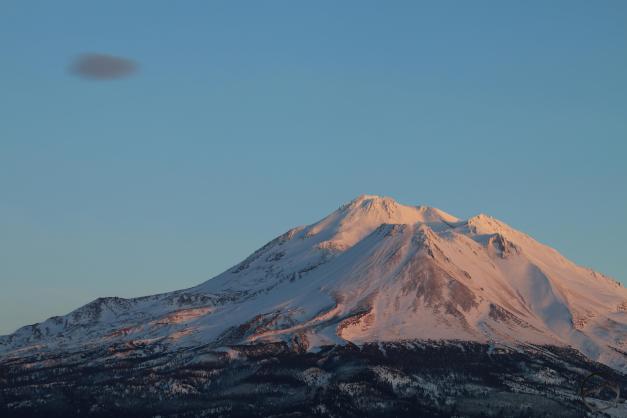 The lenticular was still there, but not much was left.

Despite the disappointment in not getting either a lenticular sunset or a nice reflection (or both), the conditions were still beautiful. Even Black Butte was looking unusually scenic, with just a hint of alpenglow on the highest point of the little mountain.

While all the other features were absent, Mount Shasta itself never fails to disappoint. In this case, the mountain was showing off its new snow with a billow plume being blasted off of Shastina. The plume itself was in Shastina’s shadow but it contrasted dramatically against the fledgling alpenglow that now drenched the higher flanks of Mount Shasta itself. 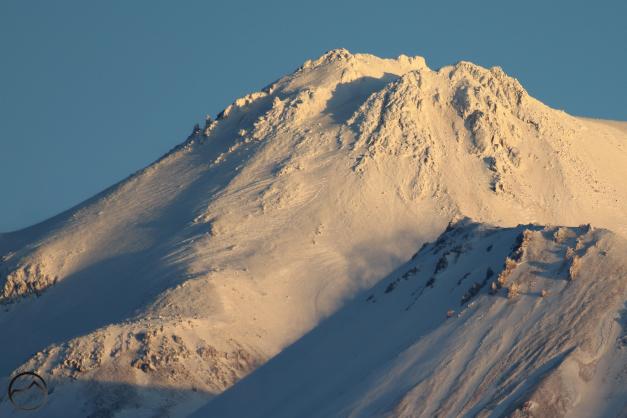 It was one of those scenes that just looked big. I was grateful to have a chance to watch it while all my kids climbed on rocks, through stones in the puddles and just ran around noisily in the Shasta Valley wind. It was nice break from the stormy weather and, all in all, a nice reminder of how awesome Mount Shasta really is.