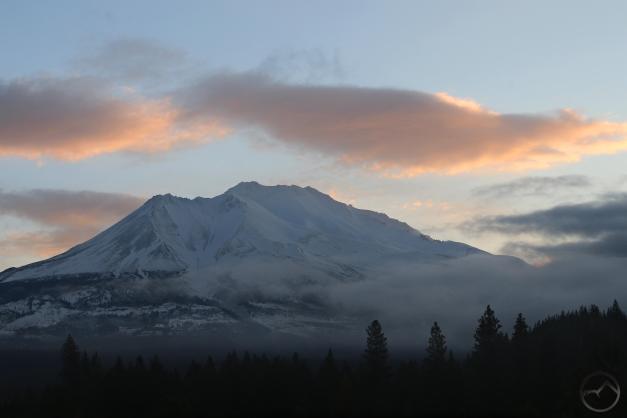 Thursday morning at Mount Shasta. It was obscured from the south but the north offered a nice view.

While it snowed over the weekend, the last few days have seen a heavy rain in the low areas around Mount Shasta. The warmer temperatures plus the rain has resulted in a very rapid melt of the snow that fell just a few days before. It is actually quite shocking just how swiftly it has all gone:

Incidentally, the tracks in front of the stove are from a bear that dropped by Tuesday night.

That much rain and the commensurate amount of melted snow means the creeks and rivers are very full right now. I decided to take my kids out on Wednesday to check the rivers out and see how things look. They were glad to get out of the house, especially if it meant getting soaked on a trail somewhere. The place to take kids and check out the river is naturally Hedge Creek Falls. The easy, action packed trail offers an opportunity to see a waterfall, a creek and the Sacramento River. All three were full and flowing in fine form. However, in the case of the dumping rain and making sure the kids weren’t doing anything to crazy, I forgot to take my camera off manual focus. Please pardon the crudity of these images. 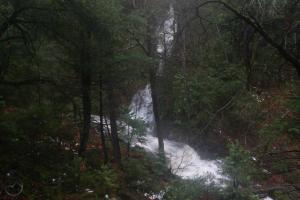 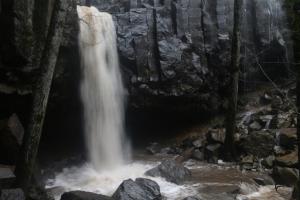 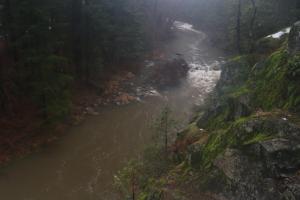 The falls in particular were pretty impressive. Hiking behind them was a harrowing experience for my youngest, who was happy to have dad carry him through the cave. My other kids made the passage with aplomb and loved the roar of the fall.

After getting thoroughly soaked, we loaded back into the vehicle and headed north, back to our house. One of the things I love about Mount Shasta is how close we are to the high desert. I love the arid environment, in large part because there is a beauty all its own there and it invokes memories of New Mexico. Another, more practical reason, though, is the way the storms are often held back by Mount Shasta and the the rainshadow means clearer skies and sunlight. Wednesday was a classic example of this.

Mount Shasta is normally visible from this spot.

While it was storming violently around Mount Shasta and the rain coming down in a deluge, it was sunny in the Shasta Valley. The clouds were halted right around Mount Shasta and so, forming a dark rampart along the high country, left the valley in an arid rainshadow. The large puddles were obvious evidence of recent rain there but I was not surprised at all to find the sun shining down on the beautiful valley.

We set out to investigate the Shasta River, the smaller, northern counterpart to the Sacramento River. Not surprisingly, it was flowing quite well.

All this water is heading into Lake Shastina, recharging the much diminished reservoir. The water from the Sacramento is pouring into Shasta Lake, which has come up about 4 feet in the last few days.

This morning, the sky was blanketed by thick clouds south of Mount Shasta but once again, it was clear to the north and offered a nice glimpse of Mount Shasta. Skies are forecasted to clear for the rest of the day and then there will be a pause in the rain before it sets in again. It is a nice respite as the snow around the house continues to melt but we get some much needed precipitation. If you are itching to get outside, this afternoon might provide a window of clear sky and no rain. Take advantage while you can!