Some Interesting Goings-On In The Shasta Valley

I had not planned on posting any more images of, well, anything around Mount Shasta until next weekend. I actually have a few hiking blog posts to put up, rather than the usual weather blogging I tend to do in the winter. I know it is lame to constantly put up pictures of snow and lenticulars but I love that stuff and I am always eager to write about it. So, that caveat having been issued, I just wanted to quickly put up some images of the neat clouds that were scattered over the Shasta Valley. More accurately these clouds were focused on the Cascade Crest but they were generally best viewed from the Shasta Valley. This great arid valley often offers clearer skies and makes a good place to see what kind of weather is going on even when the higher, lusher country is covered in clouds.

I knew there was a chance for another lenticular display when I saw the mountain that formed on Mount Shasta this morning. It was small but beautiful and made for a spectacular morning at the ski park. Sunrise on the mountain is a magical thing. The little lenticular present at sunrise grew to pretty impressive size by midday but it was consumed by low hanging clouds. Nonetheless, I was in the valley for the sunset and could see most of Mount Shasta below the clouds. It had a large “lenitculish” cloud hanging just to the north. More interesting however, were the large lenticulars that were in position over the other major peaks of the Cascade Crest. Willow Creek Mountain, the Goosenest and the Whaleback all boasted an array of interesting formations. The Goosenest in particular had a terrific lenticular tower sitting right overhead.

It was a nice display to close out this period of nice weather. Now we are supposed to get some more snow. It probably won’t be as much as the last round and will likely last about as long but I am eager for it to fall nonetheless! 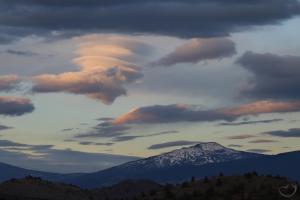 A nice stack over the Goosenest.

A variety of formations around Willow Creek Mountain.

The Whaleback is surrounded by volatile clouds.