Mount Shasta Puts On Another Amazing Show – Plus A Snow Update

Mount Shasta does not fail to impress anytime it wants to put on a show. This was certainly the case with the excellent clouds that graced Mount Shasta on Friday morning. It was an epic lenticular display. Looking at the weather forecast, I had anticipated there might be an event due to the changing weather systems. I was up early, naturally, so I headed out to check conditions. A little before 6 AM there was a single small disk hovering just south of Mount Shasta. I wasn’t too impressed but thought it had the potential to grow. The north side seemed like the way to go, since it would put the cloud in frame with the mountain better. As I headed out Highway 97, could see the cloud expanding and adding more disks to the forming stack. I knew it was going to be a good morning.

I got to a good spot near Deer Mountain Road and set up my camera. The light arrived shortly afterward and it was spectacular. Both the clouds and Mount Shasta were lit up with rose colored morning light. Though it was 7 degrees outside, it did not feel as cold as the last time I had visited this spot. This made focusing my camera easier, thankfully. It was an incredible sunrise. I captured some images and headed out. 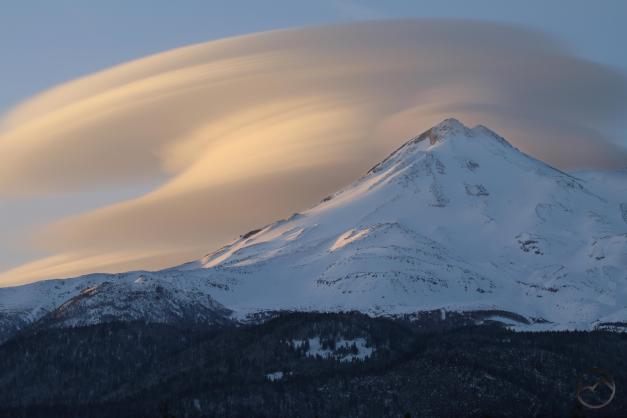 The looming presence of the clouds was magnificent.

As I drove back to Mount Shasta, the parallax had changed the appearance of the mountain and the light had shifted from rose to gold. The details of the cloud, including the very fine strata of the lenticular stack were now much more obvious. I stopped and captured a few more images, glad to have a chance to enjoy a different perspective.

Though the north and west sides of the mountain were shaded, much of the large lenticular glowed.

I continued back home but as I neared one of my favorite rock piles that I take my kids to scramble on, I was shocked by how much the cloud seemed to have grown. The sheer immensity of it was breathtaking. Even though I had traveled far enough west that Mount Shasta was now shadow, I could not resist stopping at the rock pile and capturing this magnificent scene. It was a grand morning indeed.

Later in the morning I had occasion to head into town. I could tell from my house that the lenticular persisted. As I headed into town, I stopped and captured a couple more images of the awesome cloud. While still impressive, it had diminished considerably. The small lenticular that had been hovering over the summit had correspondingly grown a little. It was a neat arrangement. 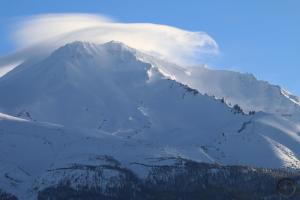 Amazingly, by 11:00 AM, the cloud had completely dissipated. It was quite disappointing, since I had really hoped to capture this cloud at sunset. Such is life. If this seeming blow is all we have to deal with, then we are quite blessed. As the day progressed, I kept an eye on the mountain, hopeful that the cloud might reform, as is often the case with lenticulars. Unfortunately it did not, only a few thin clouds clung around the summit. However, as sunset approached I noticed a slight curve had formed on one of the wispy clouds. Curious to see what it looked like on the other side, I headed north. I was pleased to find that the northern side of Mount Shasta sheltered a “lenticulish” cloud. The winds were still so I went to my favorite reflection pond in the Shasta Valley. It proved to be an unexpectedly scenic sunset.

This lenticular season has been one of the best since I moved to Mount Shasta. There has been numerous events and some have been in the upper echelon of formations that I have witnessed. This is fitting, since this winter has been a good one in terms of snow too. Most of the mountain west has been getting hammered with snow. While it is not unusual for the east to be cold and snowy, out here beyond the 100th Meridian (thank you Wallace Stegner) our water situation is much more tenuous and every winter matters. Thus far, this is a great one. I suspect all the reservoirs are going to fill this spring. Below is a satellite image of California taken on February 21st. The Pacific Crest Trail is marked on the image.

Here Northern California, there is plenty of snow in all the mountains. Where there isn’t snow, things are vibrant and green. It is not just a muted or deep green but that classic springtime California neon green. It is times like this that places like Sonoma County or parts of the Sierra foothills are premier hiking destinations. 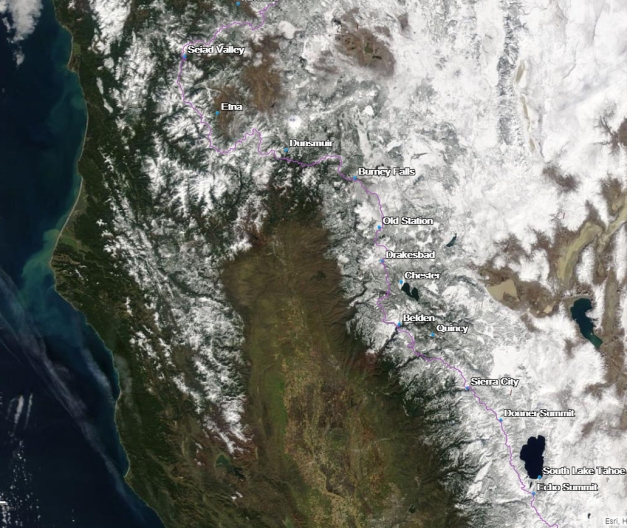 Up here in the North State, We have obviously gotten a healthy dose of precipitation and are on the cusp of even more. I hope everyone enjoys skiing because it is a great season thus far!

This comparison speaks for itself. Last year was not terrible, but is was below average. This winter is not epic but it is well above average at this point. Thank the Lord that water for another year has been provided.

As we near the end of February and have one more month of potential for really large storms to hit before spring finally starts to set in, I am certainly getting anxious to get on with the warm part of the year. I certainly enjoy the snow, but I am ready to get my kids back outside without each iteration turning into a major event of snow clothes and boots and such. For now though, I will be patient and enjoy what we have. Lots of snow and the chance for more awesome lenticulars!

Where the kids play. I am ready for green grass again!