An April Lenticular Above Mount Shasta

As the week following Easter began, the forecast was for comfortable, warm temperatures and partly cloudy skies. There was little indication that an impressive lenticular formation would manifest for much of the day. This was easily the best formation that had developed since the middle of March. The way its shape was altered throughout the day is a good example of the drama and spectacle that these clouds add to the majesty of Mount Shasta. April has seemed to be fairly lenticular-free in the past but given the meteorological disturbances today, it was no surprise that an impressive specimen would make an appearance.

Rather than another lengthy report, I think this cloud is best documented with images and some short descriptions. Hopefully this is not the only spring lenticular we get.

When the lenticular began, I was exploring a remote, trail-less area on the lower flanks of Mount Shasta. With no hope of composing a good image from where I was, I documented the smiling cloud for posterity.

Mount Shasta finally made an appearance as I fought through a lot of brush. At this point, the cloud had not changed much.

When I reached more familiar terrain, the lenticular had formed a stack and then began to dissipate. The wind blew steadily. It seemed there was a good chance the cloud might reform.

The mountain’s airspace was not the only place interesting clouds were forming. To the north there were numerous small clouds, all indicative of a great deal of turmoil in the atmosphere.

The lenticular on Mount Shasta itself seemed stable, giving little indication it too was about to retract. 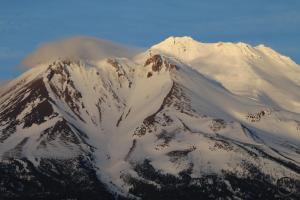 As the sun finally set, the lenticular on Mount Shasta was just vestigial. The light was odd, considering how clear it had been to the west.

The day ended with a completely different cloud arrangement over Mount Shasta. It was not as grand as the earlier lenticular spectacle but it was a beautiful sunset nonethless.

3 comments on “An April Lenticular Above Mount Shasta”