Appreciating Mount Shasta’s Brewer Creek: Oasis On The East Side

With nearly 20 miles of base diameter, Mount Shasta is nearly a mountain range unto itself. It’s ridges and canyons are the equal of those of the neighboring Trinity Divide despite being a solitary peak. Like all mountain ranges, the mountain has its common vistas and its popular destinations but also its isolated and abandoned corners. On Mount Shasta, the eastern side of the mountain is almost entirely abandoned. Only a handful of climbers and hikers make it over to this side of the mountain. With no paved roads, few trailheads and no settlements on the east side, there is simply not a lot of draw to this area for most people. Yet, in spite of this, it is a magnificent and unique part of Mount Shasta, and certainly one of the prettiest. Two features of Mount Shasta’s east side are particularly noteworthy. First, Mount Shasta appears as a lone, massive and singular summit, absent the presence of Shastina or the tower-laden bulk of Sargents Ridge. Second, the east side of the mountain features the enormous Hotlum and Wintun Glaciers, California’s largest and 3rd largest glaciers respectively. These incredible sheets of ice make for a memorable and beautiful backdrop to east side hikes.

Yet, for all the gargantuan scale of Mount Shasta’s east side features, one of its most beautiful is the delicate but extremely scenic Brewer Creek. While most of the creeks on Mount Shasta’s east and north sides are opaque with glacial silt, Brewer Creek runs clean and clear, making it a delight in the otherwise sandy and semi-desolate volcanic plain. The creek emerges from beneath the Hotlum Glacier and flows down a steep ravine before winding its way across the vast, pumice-covered east slope of Mount Shasta. It eventually enters the forest and dissipates on the mountain’s lower flanks. Though Brewer Creek is perennial, it flows strongest after the spring thaw and in the heat of the summer, when the glacier melts. At this time, the banks are laden with moss and grass and wildflowers erupt in explosions of purple and yellow. It is a narrow ribbon of life in the midst of barren, volcanic terrain.

The Hotlum Glacier is the source of Brewer Creek. This view shows the icefall near the base of the glacier’s south lobe. The water goes underground and reemerges just above the small snow patch at the bottom, center. 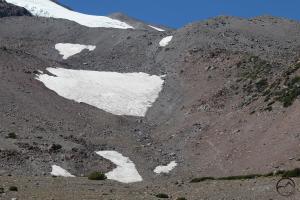 Below the glacier, Brewer Creek flows down the rocky slopes of Mount Shasta, collecting more water from large patches of snow.

Initially, the creek flows above the treeline, with little vegetation around it. 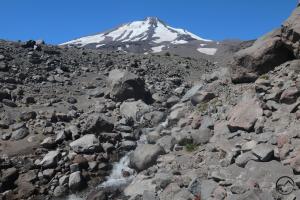 The water has carved a large, rocky ravine in the loose volcanic terrain.

As the creek passes below the treeline, more life, including grass and wildflowers begin to appear along its banks. 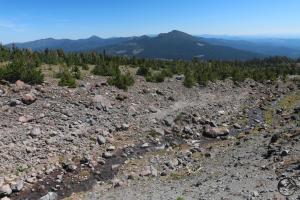 East of Mount Shasta, Ashe Creek Butte can be seen beyond Brewer Creek.

The ribbon of life courses through the rocks and trees of Mount Shasta. A small, verdant meadow clings to the banks of the cool, clear stream.

Lower down, there is a lot more plant life, even a little further away from the creek. In the later summer, this explodes with color as wildflowers bloom all around Brewer Creek.

Not far from the trail, Brewer Creek leaps over a small waterfall. The crash of the water is audible above the sound of the creek. With the mighty mountain looming behind, it is a beautiful sight.

A closer view of Brewer Creek’s little waterfall. At 8 or 9 feet, it is not large, but it is a refreshing site. The water pours over three different channels, one short, one tall and slender and one raucous cascade. The variety adds a lot of enjoyment to this delightful spot.

Looking upstream from where the trail crosses Brewer Creek. The creek spreads out just below this point and then splits into two main channels, forming a small island.

The two channels of Brewer Creek meet. One is inside the gully while the other cascades down the rocky slope. Not far from here the creek enters a thick forest and is lost from view.

Hiking to Brewer Creek is easy and follows a beautiful trail with excellent views of Mount Shasta. Reaching the trailhead is a little more difficult, as it requires driving on the dusty roads of the mountain’s east side. While there may be a few cars at the trailhead, the are almost certainly all belonging to climbers and there it is probable that you will have the creek and its beautiful environs to yourself.