Perspectives On A Cloud: A Day Around Mount Shasta 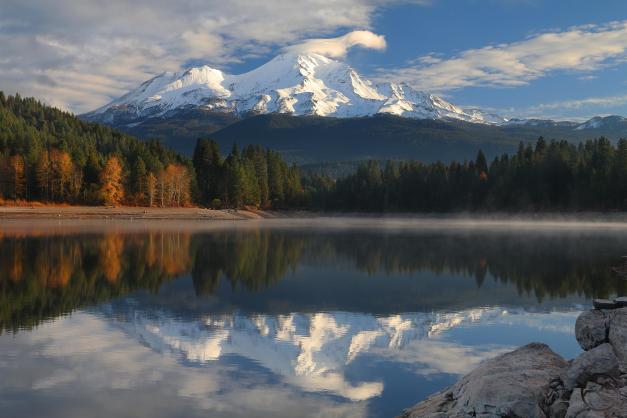 A beautiful fall Mount Shasta morning, still with some vestiges of autumn color.

Thus far, 2020 has not been a great lenticular season. Typically, October and November are some of the richest months for these spectacular clouds. I am always on a hair-trigger to head out and try to document them. This year, however, it has been pretty sparse, with only a few, and fleeting, formations worth trying to capture. With partly cloudy weather in the forecast for several days before Thanksgiving, I was on the lookout even a little more than I normally would be. 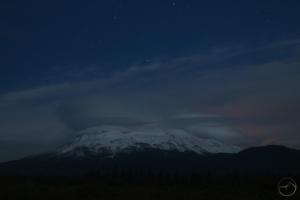 Sunday proved to be fairly overcast, with Mount Shasta barely visible through the clouds. It was with surprise then that I observed a fairly large and complex lenticular formation over the mountain after the sun had set and the clouds had cleared. My gracious wife encouraged me to go try to capture and image of it even though it was getting rather dark. Night photography is something I am definitely not skilled at but I could not pass up the opportunity to try to document the cloud. I took my oldest son and we headed off into the late twilight. The cloud was definitely worth observing but I had a hard time getting my camera focused and, in the end, it was just too dark. A near miss, but one that had me thinking that the next morning would be the morning for a spectacular lenticular. I would be ready to go and not miss this opportunity.

In the end, the cloud did not live up to what I had hoped it would be, but it was quite beautiful in spite of my grandiose expectations (which, based on what I had seen the night before, were not entirely unrealistic). While the cloud did not have the massive structure and complex flow I had wanted, it did have durability, which for fleeting clouds like lenticulars, is a quality worth noting. This gave me the opportunity to revisit the cloud time and again, throughout the day, allowing me the change of capturing it from sunrise to sunset. That in and of itself is a satisfying and noteworthy end.

At sunrise, the cloud was what I call a “dancer”. It hovered above the summit but did not hold a disk shape. Rather, it constantly changed shape, never holding a form.

A short time later, a different perspective on the mountain with the morning light. The cloud continued to hover over the summit, constantly changing. 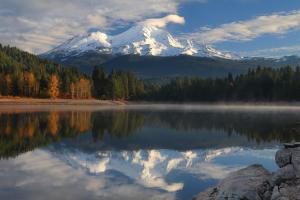 A beautiful view from Lake Siskiyou in mid-morning. The cloud was coalescing into a more traditional lenticular shape, both thickening and taking on a layered, disk appearance. 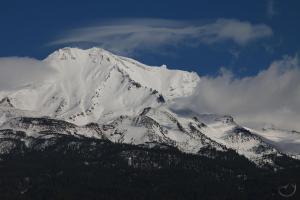 By noon the lenticular was quite wispy and had reduced in size somewhat. It continued to dance above Mount Shasta. 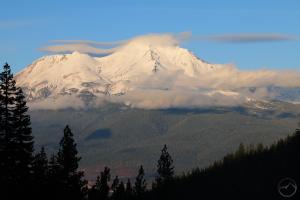 Late afternoon had seen the growth of the cloud to include distinct layers over Shastina. The rest of the sky above the mountain had cleared but there were clouds below the summit and large ones to the north.

At sunset, the lenticular had shrunk down again, barely a vestige of what it had been. In spite of its diminutive size, it captured the alpenglow well.

It is worth noting there were a few other disks floating to the south of Mount Shasta that would have been nice to capture with the mountain, if the view from the north were not obscured by clouds. However, the clouds to the north looked like a massive wave about to crash down on Black Butte. Unexpectedly, the clouds yielded a small rainbow just below the small mountain. It was a surprising sight, and one I was glad to preserve.

In the end, it was not the best lenticular, but it was a great time chasing it around all day. I am confident the “big one” will show up soon!

3 comments on “Perspectives On A Cloud: A Day Around Mount Shasta”