Another Morning And Evening Around Mount Shasta 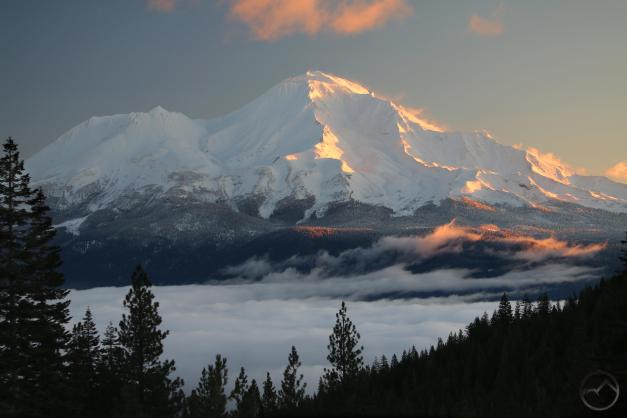 A couple of days ago I posted some images I had taken during a morning trip up to Bunny Flat along with a shot of late afternoon around the mountain. It has seemed like an age since I have been deliberate about getting up early to go out and check the conditions around the mountain or to watch closely what the sky was doing as sunset approached. I don’t know if I just grew lethargic or disengaged or something else that I can’t quite put my finger on. I wrote back at the end of September that I was coming back to the mountain after feeling detached for a long time. However, with the trip to Arizona and other events on the home front, I never got back into my rhythm.

However, with winter weather now setting in, I feel like I am emerging from hibernation and finally getting into my usual sunrise/sunset pattern. Case in point being Thursday morning. Once again, I was up early and out the door long before the sun was up. The payoff was a beautiful sunrise around Mount Shasta. I din’t get a lot of gorgeous images but getting back out at dawn, with with its companion silence broken only by the lonely mountain wind blowing, was invigorating. I feel like I am finally getting back in gear just in time for the winter weather. 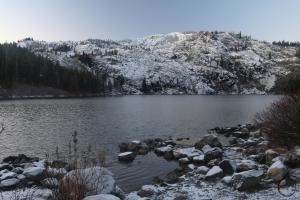 My first stop was Castle Lake, where a slight dusting of snow covered the ground. Though the cliffs were white, I am not sure a lot of it was snow as much rime ice. The way the rocks and trees were coated white made it look like the clouds had been low to the deck. 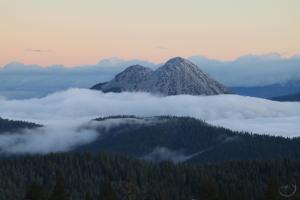 The Strawberry Valley and Black Butte Summit were enveloped by thick fog. Black Butte pierced the layer dramatically. It was an island of prominence amid a roiling sea. 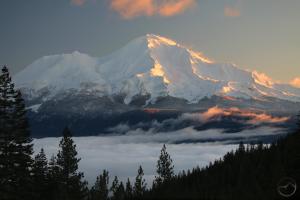 Sunrise on Mount Shasta was glorious. 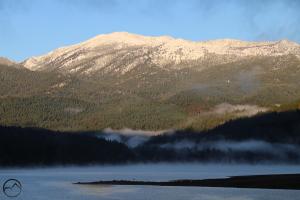 On my way back home, I saw Mount Eddy had emerged from the fog, with just a few tendrils clinging to Lake Siskiyou and upper canyons of the Sacramento River.

The rest of the day, Mount Shasta was covered by clouds, though the rest of the sky was blue. In the afternoon I took the kids to the Sacramento River to play on the rocks. The river level has gone up considerably and some of their favorite rocks weren’t as easily accessible. Nonetheless, they had a good time as always, hopping on the rocks, crisscrossing the river and racing bark boats. I spent my time watching them, reading and catching an occasional image when Mount Shasta peaked out from behind the clouds. 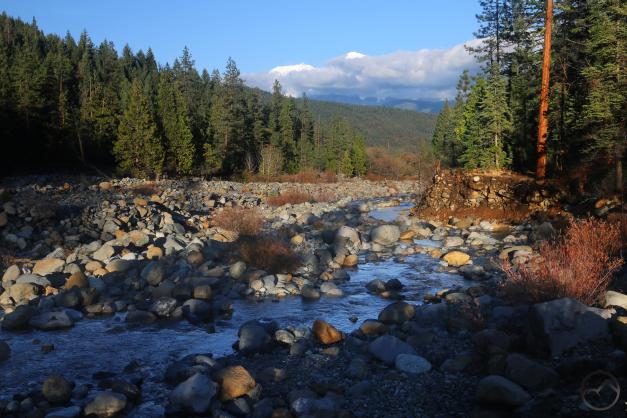 As we headed back home it seemed the clouds had cleared on the north side of the mountain so I popped up into the Shasta Valley to catch the sunset. My kids know the drill, so they played out in the fields, climbed rocks and continued to have fun in the open country. It’s pretty amazing they can go from scrambling on rocks in a mountain river frolicking in high desert fields in a matter of minutes, all within sight of the great mountain. In the end, sunset finally came and we then headed home. 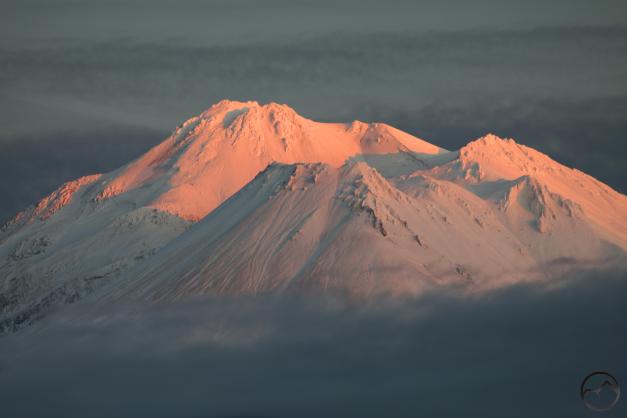 I was up again early this morning but without a cloud in the sky, I decided to stay home and write this post instead. Looking at the forecast, there is some interesting weather in the offing. I think I will continue to pursue it and the mountain.

10 comments on “Another Morning And Evening Around Mount Shasta”