Mount Shasta’s Surprise From The Skies 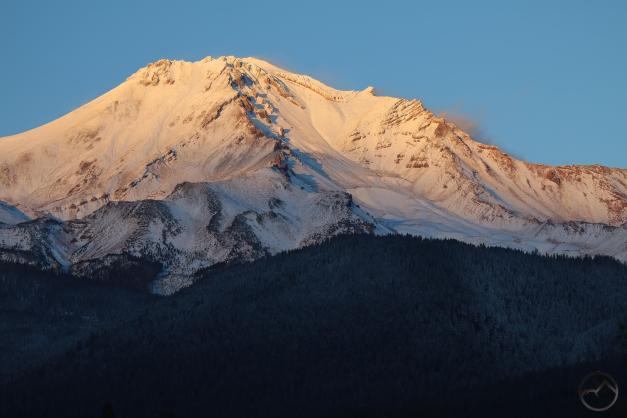 October flew by here in Mount Shasta and the month was generally warm and dry. Though pleasant, the month did not bring much snow for the mountain or relief for the dry conditions that have prevailed over the region for a while now. Thankfully, a short storm passed through the area and left a little snow on Mount Shasta, most of which was melted off within a few days.

One of the last sunrises of October 2022 on Mount Shasta reveals a little fresh snow.

It wasn’t much but at least October could account for some snow on the mountain. It was nearly a miss but at the end of the month, it could still be said that it snowed on Mount Shasta in October. The month came to an end auspiciously, for there appeared to be a sustained period of rain at the beginning of November. This appeared to be the case on the morning of the 1st, with rain coming down steadily. However, by mid-morning, the rain suddenly turned to snow. This was unexpected and, at first, I thought it was going to be brief but the snow continued until several inches had built up.

The snow took everyone by surprise but I was certainly grateful for this help that came unlooked for. With many more days of precipitation in the forecast, it seems like we might be getting a solid start to what I hope will be a very good winter. One can only pray.

The snow was pretty thick down to about 3,000 feet. It seemed to have made it as far north as Edgewood and Lake Shastina too. This was a pretty impressive amount of snow for what was supposed to be some rain. May it continue for months to come!