The heavy rains of the last few days swelled the creeks and rivers all over Northern California and the Mount Shasta area was no different. I had gone out on December 11th to see everything in the midst of the storm and it was truly a sight to behold. Creeks that are  normally small trickles were incredibly large and angry torrents. The rivers were enormous and awe-inspiring. Unfortunately, I for got my camera and did not document the fury of the storm-fed monsters. Setting out to rectify the omission from the day before, I packed up my kids and my camera and headed out in my jeep to see what the rivers looked like. The water had already subsided but everything was still incredibly full. After such a bad winter last year, it is gratifying to see so much water.

Our first stop was to check out Parks Creek in the Shasta Valley. Normally, this is just a small stream. The day before it had been an incredible, adobe colored nightmare of raging water. There was half as much water in it the day after the storm but it was still very, very full: 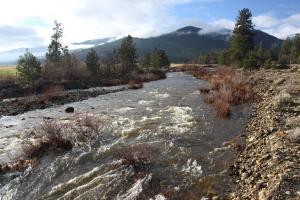 After that we hopped over to the Shasta River. Like Park’s Creek it was not as large as it had been the day before but it was still large, furious river: 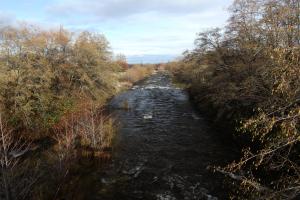 We then headed over to Whitney Creek. I was thinking about the recent damage to the Whitney Falls Trail and how this much water in the creek would only make things much, much worse. I was unprepared for what I found there: 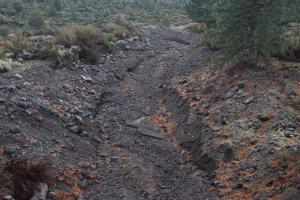 After that, the kids and I drove over to Lake Siskiyou. The lake was full and thundering over the spillway at the top of the dam. It was an inspiring sight: 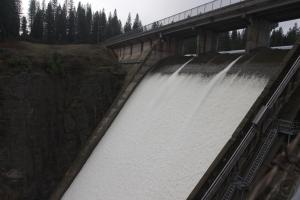 I took the two kids on the Box Canyon Trail, hoping to get some more views of the wild river surging through the canyon but little feet have their limitations. We still had a lot of fun scrambling on the rocks and checking out route down to the river, which was way to dangerous to attempt with 5 and 2 year-olds. We then hiked back out to the trailhead, and drove up to the river before it reaches Lake Siskiyou. It was also very impressive:

It was lunchtime, but the day would not be complete without a quick trip over to the McCloud River. We headed over and, surprisingly, were the only ones there at any of the three falls. With all the water I would have thought that more people would have been out to enjoy the powerful waterfalls. We all climbed out of the jeep and went out to enjoy the waterfalls all to ourselves. Of course, the rocks and dirt were for more interesting to my son (5) and the pictures of trout on the interpretive displays were way more captivating to my daughter (2) than any of the waterfalls. Still, I was glad to enjoy spectacle with them: 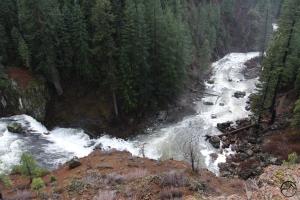 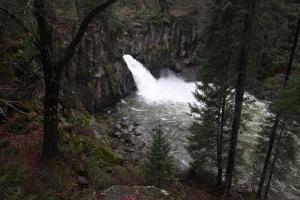 After such a horrible drought, it has been a great way to start the winter.