The first few days of February have proven to be stormy around Mount Shasta. Fortunately, the stormy canopy above the southern end of the Shasta Valley broke open at sunset on Saturday and offered a glimpse of an incredible array of lenticular clouds that had formed over Mount Shasta and the nearby Whaleback. While Mount Shasta itself was obscured by clouds, the aerial display was nonetheless spectacular. Dark clouds still covered the rest of the Shasta Valley and the surrounding mountains but the one opening in the storm proved to be ideal, contrasting the black clouds with the towering, glowing lenticulars. It is not often that the Whaleback takes center stage over Mount Shasta, but with the great mountain lost in the storm, the broad-shouldered Whaleback was the most obvious, visible landmark. Crowned by swirling, illuminated clouds, it was a stunning sight. If it were necessary to confirm that, yes, Mount Shasta was indeed there behind the lenticular tower, the North Gate Plugs, a collection of volcanic domes on Mount Shasta’s northeast flank, were visible. It was a fortuitous parting of the storm that revealed this amazing spectacle and leads one to wonder just how many other marvels are hidden away by low storm clouds. 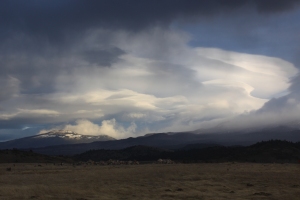