Some Quick Thoughts On The Old Ski Bowl’s Late Opening 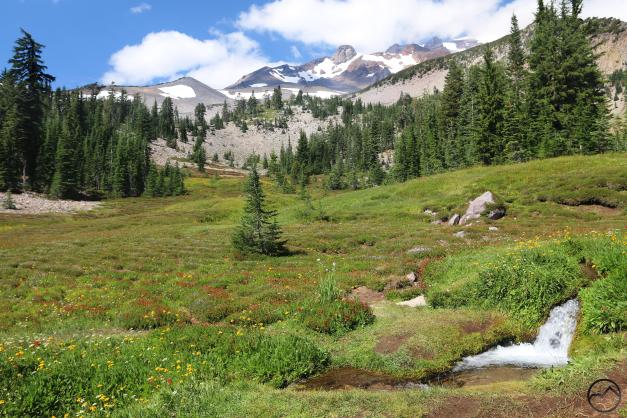 After heading to South Gate Meadow over the weekend and seeing Mount Shasta in its full summer glory, I was struck by the lateness of the peak this year. Now, as we near the midpoint of September, the meadows, flowers and fountains of the mountain are at the crescendo of their beauty and lushness. Flowers are exploding, the springs are flowing vigorously and the grasses are a verdant green. September is always a lovely month on the mountain, but it seems that this year’s clock has been pushed back considerably.

September’s verdant meadows on the mountain.

This, of course, should not come as a surprise. The winter of 2017 was a thankfully heavy one. I have lived in Mount Shasta since 2007 and over the last 10 years, I would rate last winter as the third highest in terms of snowfall (after 2010 and 2011, both of which dumped almost twice as much as what fell in 2017). Naturally, the heavier snowfall pushes the timetable for everything back and this is definitely true for life on Mount Shasta. There was still several feet of snow at Bunny Flat at the beginning of June and spring was really just setting in at that time, let alone the summer’s eruption of mountain life. It was always going to be an unusual summer timetable and for those of us who were waiting to hike some of our beloved trails on Mount Shasta, we were going to need to be patient for the warm summer weather to work its magic.

It was expected that the normal date for the opening of the road from Bunny Flat to the Old Ski Bowl would not happen on the traditional date of July 1st. In normal years, the beginning of July has given the snow ample time to melt off the road. It also affords Panther Meadow a chance to dry out a bit before people arrive and threaten to veer off trail and trample the fragile landscape. As anticipated, July 1st came and went and soon the projected date for opening the road became July 21st. Google Earth recently updated its maps to reflect conditions on Mount Shasta as of July 8th of 2017. The images reveal a lot of snow up on the mountain:

One week beyond the road’s normal opening date, there is still significant amounts of snow on the pavement. Perhaps more importantly, Upper and Lower Panther Meadows were completely covered in snow. This meant that not only did the snow on the meadow need to melt, the meadows then needed to have a chance to dry out a little. 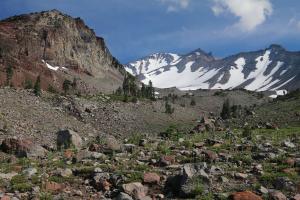 Waterfalls and flowers at the Old Ski Bowl.

Of course, July 21st came and went and beyond that no date was given for when the gate at Bunny Flat might be opened. Finally, 5 weeks past the traditional date, the road was clear and vehicular access was granted for the Old Ski Bowl. It was not normal conditions at road’s end either. Not only were the pasque flowers seeding out abundantly, but everything was green and lush. Crowning the unusually verdant scene was a lovely waterfall cascading down the rocks below Green Butte. The rushing water’s symphony was audible where normally none is ever heard. It was marvelous.

Though I would not want to wait 5 extra weeks every year to get up to the higher trailheads at the end of the Everitt Memorial Highway, this year was a real treat. The delay in the flowering season was also serendipitous, since it gives us an opportunity to enjoy the wildflowers’ peak display when the skies are clear and blue. August turned out to be an exceptionally smoky month and had the timetable not been pushed back, the flowers would have had to be enjoyed in ugly, oppressive conditions. Thankfully they can be appreciated now, unusually in September, when the sky has cleared of smoke and the peak beauty on the mountain is truly peak. All in all, the winter was a blessing in many ways. Let us be grateful.