Next Saturday, July 21st, the city of Mount Shasta will be recognized as the very first town to be identified as an official Pacific Crest Trail Trail Town. This is an exciting recognition for our community, particularly considering all the towns the PCT passes near on its 2,659 mile journey from Mexico to Canada.

It makes sense that Mount Shasta is the inaugural town in the new program run by the Pacific Crest Trail Association. No other mountain dominates the PCT like Mount Shasta, visible (to varying degrees) for about 500 miles of the trail, it is a constant presence for thru hikers (people completing the entire, continuous journey from Mexico to Canada) that lingers deep into Oregon. However, there is more than the mountain that makes the town a good place to kick off the Trail Town program. Mount Shasta is centrally located in relation to the rest of the trail. Hikers would pass through the town after completing about 3/5’s of the trail. This means that it is roughly equidistant for PCT enthusiasts in northern Washington and Southern California, and all points in between. Also, the way the mountain looms above town gives Mount Shasta a sense of being “on the trail” in a way many other communities near the trail don’t necessarily posses.

Getting ready for the Trail Town festival.

The festival will begin at 8:00 AM with a guided hike on the PCT. I believe that the hike will begin at the Gumboot trailhead. At noon, the activity will shift to the downtown area, where there will be numerous demonstrations covering a variety of hiking and PCT related topics. Many of these will be put on by local community groups including the 5th Season and Shasta Mountain Guides. Other groups, including the PCTA will be there doing demonstrations as well. Shockingly, I have been invited to have my own booth as well. I will be there talking about local trails, other hiking destinations in the area as well as teaching knot tying. There will also be food and music.

It is going to be a great community event and I hope that everyone will come and check it out! I am particularly excited at the prospect of Mount Shasta, as a community, embracing the fact that we are an excellent destination for hikers, as well as other forms of outdoor recreation. I think that this really is the way forward for not just this town, but for all of southern Siskiyou County. If the recognition of this fact from the PCTA manages to really kick this off as an identity for this town, then all the better. 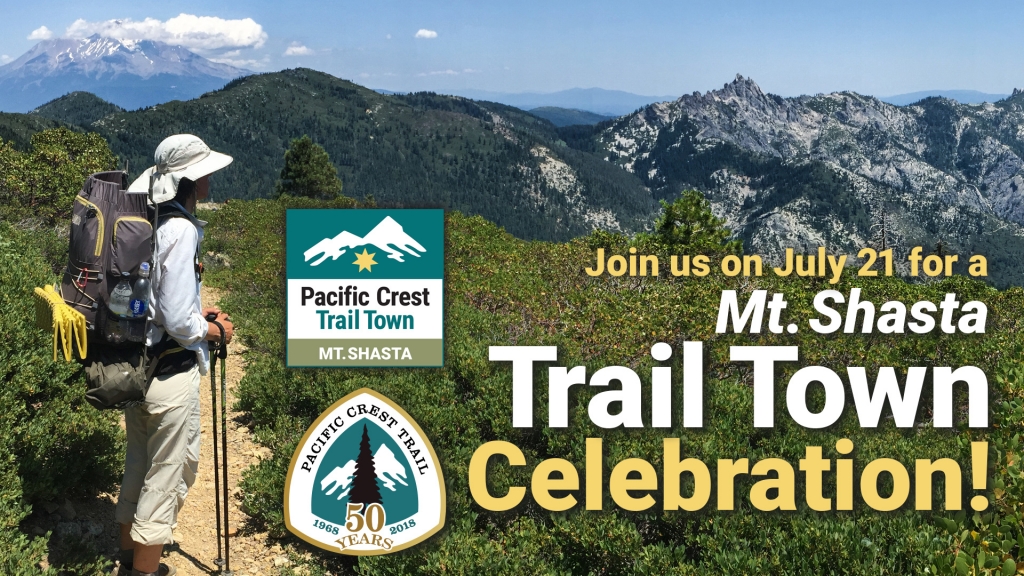 We are fortunate to have such a great section of the Pacific Crest Trail so close to Mount Shasta. It connects many of the best destinations in the Trinity Divide, creates several opportunities for great backpacking trips and longer hikes, and establishes a trail link to the Trinity Alps and the southernmost part of the Cascades and Sierra Nevada beyond. Whether out for a day hike, a longer overnight trip, or hiking from Mexico to Canada, it is a fantastic asset for the area. I hope everyone enjoys hiking it as much as I do.

Here is a gallery of images taken from the PCT that stretches from McCloud to Trinity Summit, all of which roughly falls within the Mount Shasta orbit!

Castle Crags from the PCT.

Castle Crags from the PCT.

Cliffs of the Crags

Castle Crags from the PCT, near the Soapstone Trail

Mount Shasta from the PCT, near the Soapstone Trail

Mount Shasta and Mount Eddy from the PCT above Seven Lakes Basin.

Meadow along the PCT.

Toad Lake from the PCT junction.

Deadfall Basin along the PCT.

High Camp Basin below the PCT.

High Camp Basin below the PCT.

Bull Lake along the PCT.