Despite the clear skies, a finger of smoke from the Hirz fire drifts past Mt. Shasta.

While yesterday proved to be a beautiful day, today proved to be even better. The skies were bright blue and the air crisp and comfortable. In truth, it really felt like fall, despite not even having made it to September yet. It was strange, in a way, to observe how the seasons had already started to change while we were living in a land with no shadows. The smoke that has enshrouded the region for a month blocked out almost any indication of summer passing away. It certainly blocked out the sight of all the snow melting off of Mount Shasta. Though the mighty glaciers still ensconce the mountain in ice, the western side has only vestigial patches of snow left. Despite its nakedness, we were all very glad to see Mount Shasta. 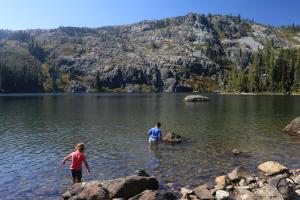 The feeling of fall was especially true up at Castle Lake. My wife and I, drawn out by the clear air, moved most of the days schooling for our three kids up to the lake and spent several hours at the lake. The kids were in heaven, crawling around the lakeshore, wading in the water collecting specimens of all sorts of animal life. In general, it was an idyllic morning. The highlight occurred when my wife spotted a creature crawling out of the water and attaching itself to a rock. It turned out to be a dragonfly. The sight of the insect’s emergence from the old exoskeleton was absolutely remarkable. My wife got some really amazing video of the process. Talk about a day at school!

Despite the clear sky, it was evident that the Hirz Fire still burned. Just south of the Mount Shasta area a wall of smoke loomed. It was also visible in the distance east of Mount Shasta as well. It was particularly interesting to see how just a finger of smoke pushed its way up against Mount Shasta while the rest of the mountain remained clear. These conditions actually aligned pretty closely with what was shown on the smoke condition map:

Smoke encroaches on the southern end of Mount Shasta. 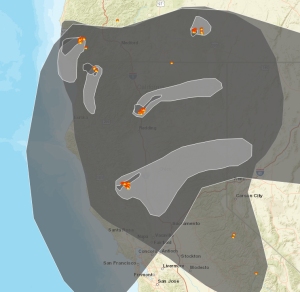 Smoke sweeps northeast, past the south side of Mt. Shasta.

By the time we headed down from Castle Lake, the smoke had almost been blown out from around the mountain. Instead a line of clouds was starting to take shape around the upper reaches of Mount Shasta.

These clouds continued to gather strength until later in the day it covered the summit. While I missed seeing the entirety of the mountain, it was great just being able to observe the beauty of the light, fluffy clouds. It is amazing the gratitude one can feel for things as basic as clouds and blue sky after living within the forest’s funeral shroud for a month. School may be here but the summer is not over yet! There is still a lot of time to get outside. At the very least, we’re only halfway through the season when the Old Ski Bowl is open! If anything marred the day, it was the return of the smoke in the evening. It wasn’t too think but I could smell it and the view definitely turned hazy.

All of this raises the question about what is going on with the Hirz Fire. According to the news briefings, the fire lines are being cut in around Tombstone Mountain and along Middle Salt Creek. The map that accompanied the briefing indicate that further lines are being cut in along North Salt Creek. It seems like the fire is not moving with the kind of speed that made the Carr Fire such a monster. It seems as though the lines are holding and hopefully this thing will be in hand soon. Here is what the fire looks like at this time: 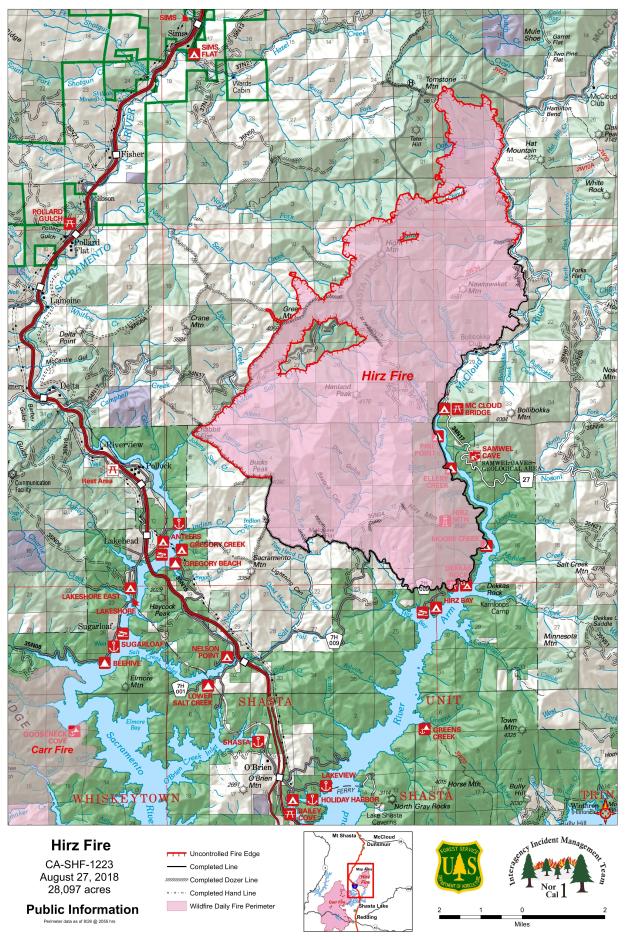 Just like with the Carr Fire, the plan is for the lines to get cut in and then let the fire burn itself out. I certainly hope that this will soon be the case. One thing that made todays conditions so interesting was that it was close to what I would have imagined the conditions would have been like if all the other particulate had not been put in the air by all the other fires. I am not sure where all the smoke that has been plaguing us got blown off to but the smoke stew seems to have been flushed out pretty effectively. I sure hope that is a continuing trend.

For what it is worth, here is a progression of what the Hirz Fire has been up to the last couple of days: 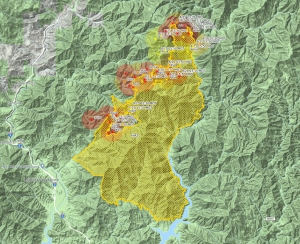 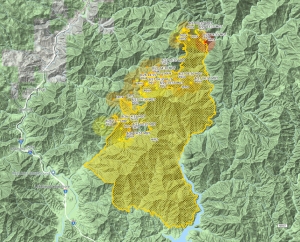