Delta Fire – The Situation As Of Thursday Morning (Sept. 13) 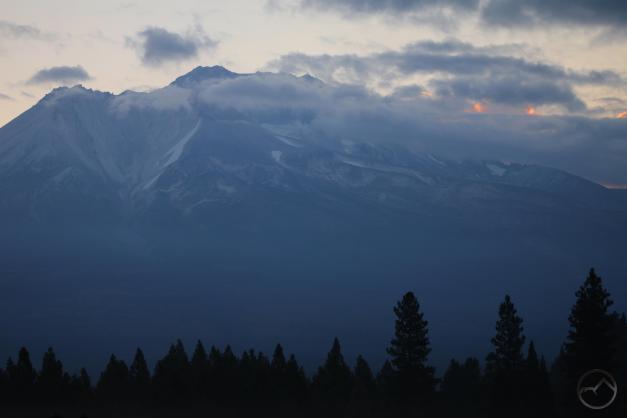 More than a week into the Delta Fire, the firefighting effort has really turned a corner on containing the beast. Officially, the fire is at 17% containment. While it has grown 58,427 acres, it has not jumped any fire lines and the areas that have been burned recently were within the projected fire lines. Not only has the pace of containment accelerated, the growth of the fire has decelerated. This is largely the result of cooler temperatures and even a little precipitation. Though there is no more rain in the immediate forecast, what little we did get was a huge blessing. It suppressed fire activity and allowed firefighters to really advance the containment lines. As a welcome harbinger of these successes, Mount Shasta even got a light dusting of snow during the night!

The Delta and Hirz Fires as of September 12.

Though the Delta Fire is officially larger than the adjacent Hirz, the two have completely merged together, forming a single block of burned terrain that is over 100,000 acres. The Hirz is 100% contained, so its containment lines help hold back the Delta Fire and have allowed firefighters to deploy resources in more pressing places. This has also been true on the south, where contingency lines built to hold back the Carr Fire, should the fire have jumped the main containment line, were also critical in holding the Delta Fire back from a southward advance.

The really encouraging work has taken place on the north side of the fire. Not only was the Highland Springs community saved, but the containment lines further north have been constructed. This means that the Tamarack Lake Basin is likely to be saved. As an added bonus, the rarely visited Highland Lakes, Pond Lily Lake and even possibly the Grouse Lake basins will all be outside the fire’s ultimate boundary. This also means the Grey Rocks, some of the most rugged and enigmatic peaks in the region will not be burnt over as well. This is great news for hikers, explorers and lovers of the natural world. Also, it means that the communities further up the Sacramento River Canyon are not going to be threatened by the fire. 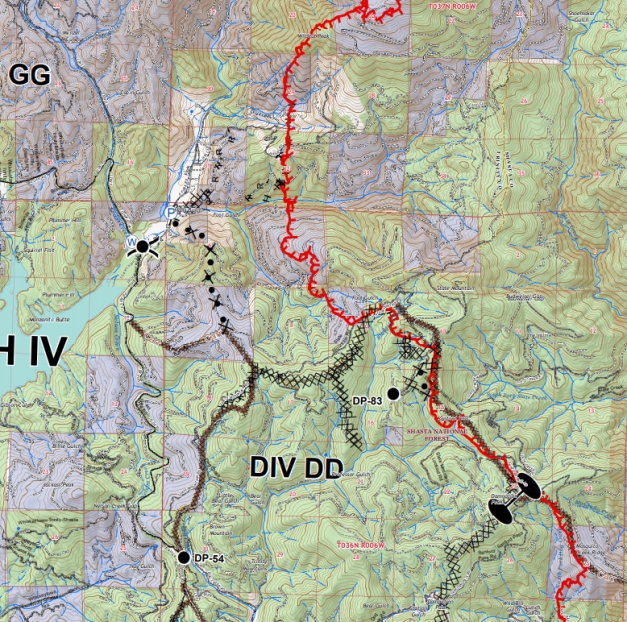 Progress is also being made on the west side of the fire. Some of the Carr Fire’s contingency lines are in use The terrain here is steep and rocky in some places. Lately, it has been the focus of consistent aerial attack. Fire lines have also been under construction as well. This area is critical, since there are some residences and even an extensive vineyard here along the East Fork of the Trinity River. While this area is still threatening, it is not as urgently dangerous as it was a week ago. Progress is definitely being made. Even though the low temperatures of the last few days and nights are not going to be sustained, the daily highs will only reach into the 70’s, meaning there are better conditions for fighting the fires.

The good conditions and increasing containment mean that the worst of the Delta Fire is likely in the past and we can hopefully look forward to a pleasant end to the summer months and a beautiful fall. Let us pray the fires are left behind as well.

Here is a gallery of Delta Fire activity from the last three days. Click to enlarge: 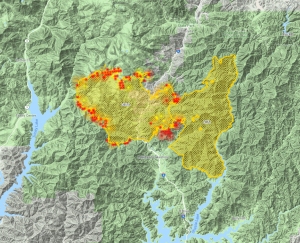 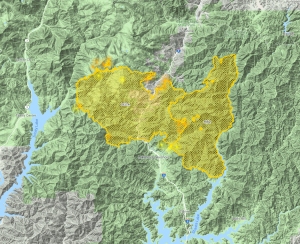 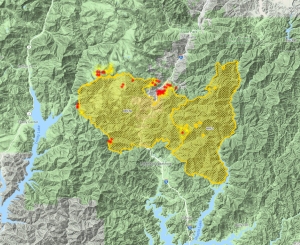 Of course I had to write a post about turning a corner on the fire. It’s only after that that the fire flares up and necessitates I-5 being shut down once again. The fire has increased activity around the Gibson exit. Other than a spot up on Red Mountain in the northwest, the rest of the fire looks fairly quiet but the increase of activity in the canyon is troubling. Here is how it looks: 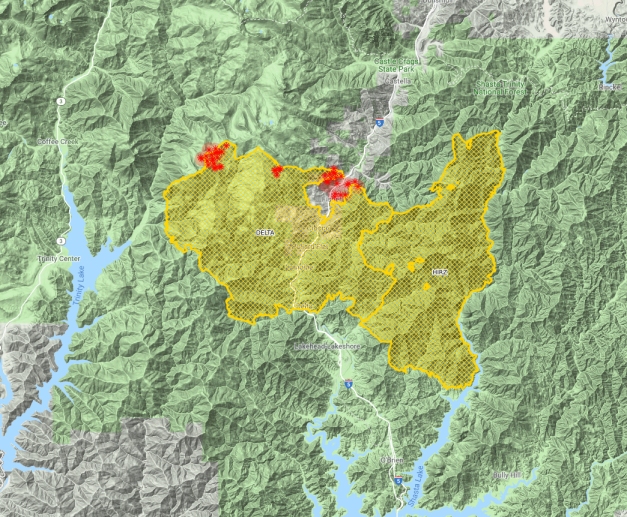 Without even knowing the fire had kicked up again and that I-5 was closed, it was obvious here in Mount Shasta that something was afoot. After good air quality over the last few days, the smoke rolled back into town in a big way. No doubt this is the result in the fire getting more active again. Thankfully, despite the seriousness of the flare up, it is a pretty localized event. Hopefully they will be able to put a lid on it pretty quick.

The smoke it back yet again. Hopefully it will blow out soon.

4 comments on “Delta Fire – The Situation As Of Thursday Morning (Sept. 13)”