About That Sunset View Of The Trinity Alps 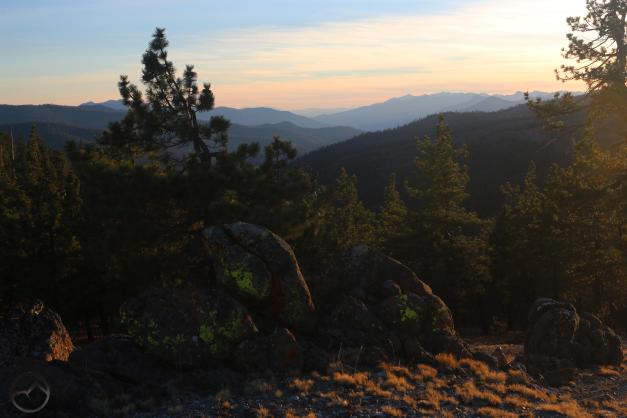 The Trinity Alps from our sunset vista.

This, of course, makes me think of all the different adventures that await in the Trinities. The area is so expansive that it almost runs together, making each area difficult to distinguish from the others. It was this that caused me to make a locator for the view from our hike: 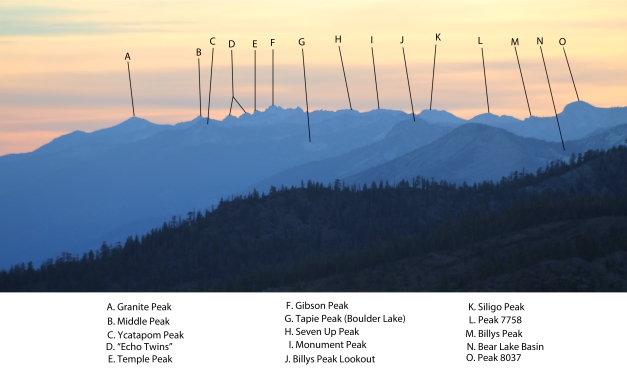 A great deal of area falls within this viewshed. The area marked “N” is the Bear Lake Basin (actually the basin containing Little Bear Lake, but it is a smaller part of the larger whole). It lies about 14 miles away from our sunset vista. In contrast, the peak marked “I” is Monument Peak, which is an impressive 42 miles to the south. The whole area in between is all part of the massive Trinity Alps Wilderness. The 15 peaks (and 1 lake basin) identified here compose one of the more scenic portions of the Trinity Alps. Miles of trails course through this area and there are at least 14 lake basins visible here and a few dozen lakes contained therein. Some of these are among the most beautiful spots in all of Northern California.

For those unfamiliar with this large mountain area, it may come as a surprise that this area is actually only the southeast corner of the Trinity Alps. There is far more wilderness in these mountains than is visible from this vantage point. The crest of the Scott Mountain, extending west from where we were hiking blocks out the majority of the range. To give some perspective, I made a locator that includes the same area, but from the perspective hikers enjoy from the top of Mount Eddy. This view encompasses the entire eastern half of the Trinity Alps and includes the spectacular granite heart of the range as well as the western half of the Scott Mountains, which lies within the Trinity Alps Wilderness. 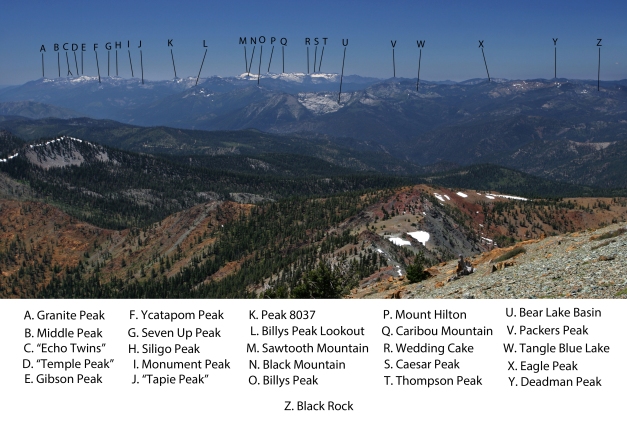 That is a magnificent block of alpine wildlands. We are blessed to have such an incredible wilderness resource to enjoy so close to Mount Shasta. In the summer, when Parks Creek Road is open, the closest trailheads lie less than an hour drive away from town. Anyone who has been fortunate enough to explore these mountains know what a blessing they are.

Of course, such an examination of the view to the south demands an analysis of the view north as well. From our vista above the PCT we could see numerous landmarks, most of which were in Oregon. The furthest away was Rustler Peak, which lay 88 miles away. Just south of that is the Fuji-like tower of Mount McLoughlin, the highest peak in Southern Oregon. One particularly interesting feature was the highlands of the Mountain Lakes Wilderness. From our vantage it appeared a nondescript ridge but that area certainly offers more than you might guess when looking at it from the outside. The interesting terrain is within a large caldera where rugged cliffs and numerous alpine lakes await hikers. 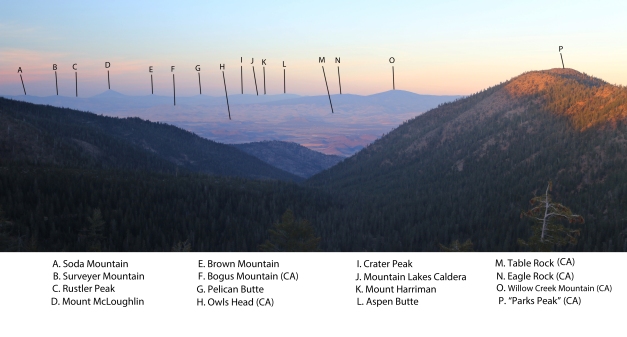 All in all, that is quite a bit of terrain taken in from one vantage point. The viewshed extends 120 miles from north to south. That is not too bad for a very short, easy hike. The trail leads through beautiful terrain and is suitable for kids under 4 to hike! What is not to love about that?!