The darker it got, the more definition the lenticular took on. It remained a striking spectacle.

A lenticular cloud floats above a large wave over Mount Shasta.

Last Sunday featured an excellent lenticular display on Mount Shasta. The day started with nary a cloud in the sky but by midday it had become overcast and a very large stack of disks had manifested over the Mountain. Near sunset, the overcast skies had cleared, though a large bank of clouds still threatened just north of Mount Shasta. Unfortunately the large stack had gone but in its place a large wave had formed and seemed to be blowing off of the summit. In spite of the lenticular’s disappearance, I decided to stick around and document the spectacle.

The wave extended from just north of the summit to the south, reaching well past Shastarama Point. This gives it a linear distance of nearly 3 miles. The cloud undulated majestically in place, the far end seeming to fray and then disappear.

Though I was disappointed the circular clouds were gone, the wave had an elegant beauty of its own and I was glad to have been able to witness and enjoy it. However, without warning as the sun began to set, a disk suddenly emerged out of nowhere. It was a very welcome addition to an already interesting sunset.

The disk remained static for a while all the time the wave continued to surge amidst the obviously turbulent air around Mount Shasta. The stable disk and the chaotic wave were a striking contrast. However, after a few minutes in this state, something unusual took place. The large, frayed end of the wave broke free from the rest of the formation. This on its own was not odd but the south end of the disk suddenly broke away from the main cloud and stayed with the frayed cloud as it drifted further south. 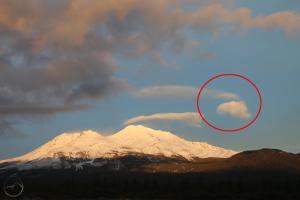 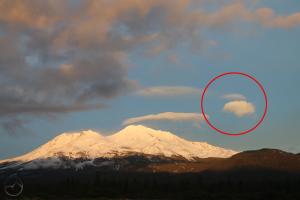 I have seen waves over Mount Shasta before and I have seen plenty of lenticular disks. They are obviously related in terms of the turbulence in the air and the wind currents. However, I assumed this was just a general connection. I have never seen the two linked in such terrific fashion. It seems apparent that, though one looks stable and one looks chaotic, the two are linked by some invisible but very strong connection.

Evident in the above sequence is the fact that the cloud and it small satellite disk eventually dissipated as they drifted south. The primary disk and wave remained, continuing to regenerate through the fluctuating currents.

There was no great consequence to this small but noteworthy and interesting event. I share it to illustrate the awesome and, in some ways unknowable, power that Mount Shasta has on the environment around it. Though general phenomena repeat, it is always different and filled with great mystery and beauty. It awakens the sense within us that there is something much greater than ourselves out there.

The eventually set but the wave and the disk continued into the darkness. It was the last great display of 2018. 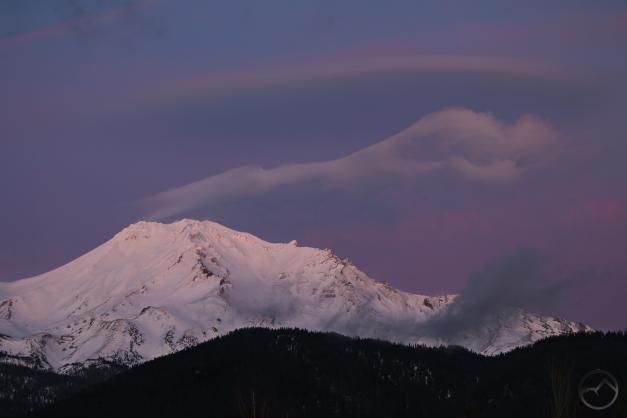