Towers At Sunset And An Almost Lenticular

The summits of Mount Shasta and Shastina bathed in alpenglow.

Sometimes even when things don’t quite pan out, Mount Shasta still presents some overwhelming beauty. This was certainly the case this evening. With no really interesting clouds manifesting all day, just before sunset some nice disks started to coalesce above the mountain. I loaded the kids into the car and headed to the nearest easy-to-get-to spot near my house. I unleashed them on their “forts” they have made in some bushes and I watched the sunset from my camera. The kids know the drill and love going with dad to take pictures.

Unfortunately, the clouds, though scenic, ended up dissipating before ever really getting going. I note them only because I am a bit obsessive about them. Hopefully I am not the only one who appreciates them. 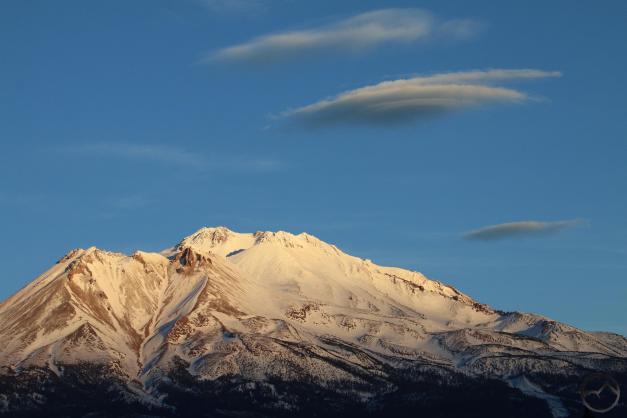 The clouds gone but myself in position to photograph the sunset, I loaded on my new lens and shot some close ups of Mount Shasta’s awesome towers. Though I have never really dabbled in time lapse, I did make a few GIFS the other day to illustrate an upcoming post I have in the works (I posted a practice I thought it might be interesting to Facebook. See it here if you are interested). Since the clouds were gone, I thought it might be interesting if I were a little more deliberate in taking images for that purpose. It turned out rather interesting, in my opinion:

With the new lens I was gifted, I can capture more of the drama and detail of Mount Shasta’s terrain. A lot of these features are really under-appreciated by most save avid climbers. I aim to appreciate them now! This perspective really contrasts the summits of Shastina and Mount Shasta, which is nearly 2,000 feet higher. The uppermost head of the Whitney Glacier is visible from this perspective as well, just below the almost snowless triangle of rock in the upper right. The large tower at the head of Diller Canyon has always been a favorite of mine. I look forward to exploring it more!

I still have a couple of posts I want to get up from the end of the year but they will keep for a day or two more. For now, another grand moment around Mount Shasta!

One comment on “Towers At Sunset And An Almost Lenticular”