Waterfalls are among natures most beautiful spectacles. Grace and power of water plunging and cascading over rugged terrain has always captured human imagination. It often seems that for a scene to be complete, there needs to be running water and it is at its apogee when the water falls precipitously. Like many of the Cascade’s great volcanoes, Mount Shasta has its share of waterfalls and some are among the most beautiful in California. However, nowhere else on Mount Shasta is there a higher concentration of cataracts as there are on Mud Creek. Three waterfalls, each distinct in appearance, punctuate Mud Creek’s long, incredible decent through its eponymously named canyon. Each is a beautiful sight, worthy destinations for some of the mountains most spectacular trails.

It is significant that these three waterfalls are located on Mud Creek. Emerging from the melt of the Konwakiton Glacier and nearby permanent snowfields, Mud Creek is among the largest waterways to form on Mount Shasta. Only Squaw Valley Creek, which begins nearby at South Gate Meadow rivals Mud Creek. However, while the former can be accessed fairly easily, the waterfalls on Mud Creek present significant challenges to those who seek to appreciate them. All three are found in Mud Creek Canyon, though their locations are distributed to each of the canyon’s major sections. The uppermost falls, Konwakiton Falls, is located high on Mount Shasta at about 10,500 feet, at the head of the canyon. Mud Creek Falls is positioned in the midst of the widest section of the canyon, near the confluence with Clear Creek. The last falls, Red Fir Falls, is found is the shallowest and narrowest part of Mud Creek Canyon. Their respective locations contribute to the diverse character of each of the waterfalls, adding intrigue and mystery to the hunt for these awesome pageants of falling water.

Konwakiton Falls at the head of Mud Creek Canyon.

The most difficult of the waterfalls to reach is also the highest. Konwakiton Falls is found in Mount Shasta’s ancient, primordial heart. The complex geology of some of its oldest eruptive periods is exposed in the cliffs around the falls. The loose scree and crumbling volcanic cliffs make Konwakiton Falls all but inaccessible. Consequently, there are only a few good vantages from which to observe the falls. The unstable terrain also makes it difficult to determine the height of the waterfall. A permanent snowfield covered by rocky debris lies below the exposed part of the falls. It hides the full extent of the drop. As the water passes beneath this crumbling curtain it is hidden from view, only to reemerge a few hundred feet below. Interestingly enough, once the water has reappeared from behind the rock and ice, it only travels a short distance before disappearing once again. This patter is repeated several times as Mud Creek makes its way down the canyon. The constantly shifting canyon walls is perpetually burying the creek and forcing it to amend its course.

There are only a few good vantage points from which to observe Konwakiton Falls. The rim of Mud Creek Canyon is the best. 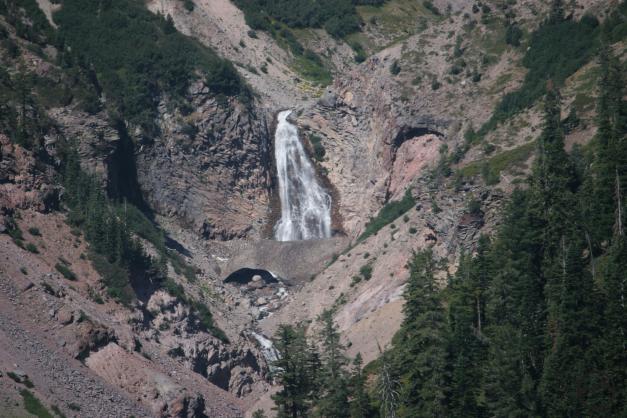 Taking its name from the creek that gives it life, Mud Creek Falls is a top contender to be the most beautiful waterfall on Mount Shasta. Its location in the canyon is certainly once of the most spectacular locations imaginable for a large waterfall. The falls is large and full as it plunges over a sheer cliff. Where Konwakiton Falls relied on glacial melt to feed it, by the time Mud Creek flows over the second waterfall it has been fed by numerous large springs that line the walls of Mud Creek Canyon. As the water slides over the precipice, it fans out over the band of erosion resistant rock, giving the falls a fuller body than any other waterfall on Mount Shasta. The waterfall is also one of the tallest in the area but its size is dwarfed by the tremendous canyon that surrounds it. This is truly one of the mountain’s grandest displays.

The view from the east side across the widest section of Mud Creek Canyon.

Mud Creek Falls is best observed from the Clear Creek Trail. For the really adventurous, there is a route by which one can scramble down to the falls. This is the same route by which hikers must cross Mud Creek Canyon on a circumnavigation of the mountain.

Perhaps the most mysterious of the waterfalls on Mud Creek, Red Fir Falls is the smallest and easiest to get, save for the shroud of anonymity that has girdled this cataract. Found in the shallowest and narrowest part of Mud Creek Canyon, the area is seemingly lost to all but the most motivated few who explore this area. The waterfall got its moniker (unofficially, of course) from the nearby Red Fir Ridge. This ridge was the location of the old route that once led across the flanks of Mount Shasta in the 19th century. The falls are not tall, perhaps only 35 feet or so, but they are easily reached and be enjoyed from afar and from their base, making them something of a unique experience among the big waterfalls on Mount Shasta, all of which are found in steep canyons and must generally be viewed from afar. The intimacy offered by this little cataract and the seemingly “lost” nature of the place, make this a great place just to come and be.

Mount Shasta peeks out above the lowest section of Mud Creek Canyon.

Red Fir Falls is reached by an easy hike, for those motivated to find.