The remnants of a brief but awesome lenticular.

The last 48 hours have seen some awesome but frustrating lenticular activity. Wednesday afternoon a great series of clouds formed over Mount Shasta. However, I was at my daughter’s soccer practice and couldn’t go capture it like I wanted. Being a dutiful father, I kept my priorities in order. By the time I was finally able to get to a spot where I could try to get it, the cloud had withered into an indistinct blob above the mountain. Deflated I went home but I had a suspicion that the cloud would return during the night and might present a great sunrise.

I got up well before dawn and headed over to the east side of Mount Shasta. Sure enough, the lenticular was back, though it was not quite as distinct as I had hoped it would be. Nonetheless, the morning was beautiful and I was hopeful that with some great morning color it would still be a spectacular sunrise. Alas, though the morning light was good, it never got as explosive as I had thought it might. It was still an exceedingly beautiful morning and I was grateful to have been out there watching the colors on Mount Shasta once again. 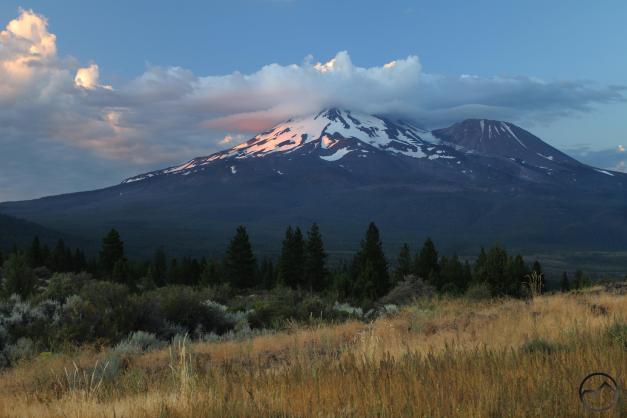 Sunrise on Mount Shasta and its lenticular crown.

I headed back into town and found that the lenticular cloud had more definition on the west side than I thought it would. It was enough to make me stop and document the cloud’s appearance.

The mountain was in shadow but the cloud’s layers were still evident.

By mid-day the cloud had gotten really impressive. The wind was blowing steadily and it was obvious that weather systems were in flux. When meteorological changes are afoot there is always a chance a lenticular might develop. Today was a good example of that. The cloud itself seemed particularly unstable, changing its shape with celerity.

An impressive lenticular on Mount Shasta by noon.

Mount Shasta was not the only mountain to see lenticular activity today. There was an excellent display over Mount Eddy as well. The second highest peak in the area does not often see large formations develop in its vicinity but today it had a really impressive array of lenticular clouds. 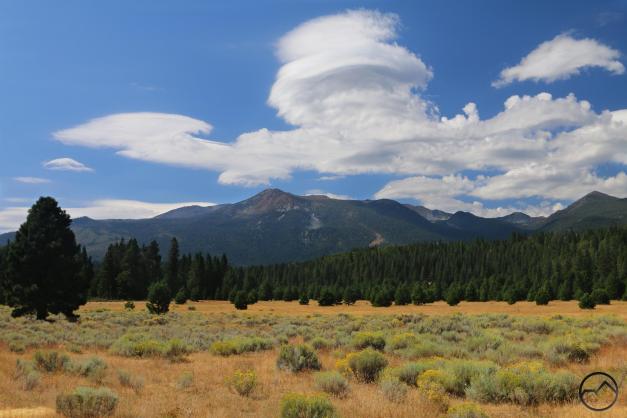 However, while the clouds continued for a few more hours, by about 4:30 PM they had shrunk considerably. It was apparent that the clouds would not last until sunset as I had been hoping they would. By the afternoon, there was just a small dome over Mount Shasta’s summit.

All that was left of a once massive display.

Even the small cap over Mount Shasta did not last. By 5:00 PM it was gone. At the same time, the collapsing weather system brought air currents from the south and on these currents road in the smoke from a fire down by Red Bluff. The light grew red and the plume grew to the south. Not only had the lenticular disintegrated but the skies were growing smoky! Interestingly, as I went into town for my daughter’s evening soccer game (her first of the season), I could see the tendrils of smoke closest to Mount Shasta taking on a lenticular-type shape. It seemed even though the condensation necessary to form the cloud had dissipated, the air currents were still moving similar patterns.

It is not obvious but the smoke in the lower left was matching an earlier lenticular in the same position.

The great lenticular that had marked much of the day fizzled and faded. I was disappointed at the lost opportunity for an incredible sunset. In the end, however, a much more important thing was witnessed this evening. My daughter, who will be seven in a couple weeks, played her first soccer game. She scored two goals and was a fierce competitor the entire time. I was an extremely proud father! 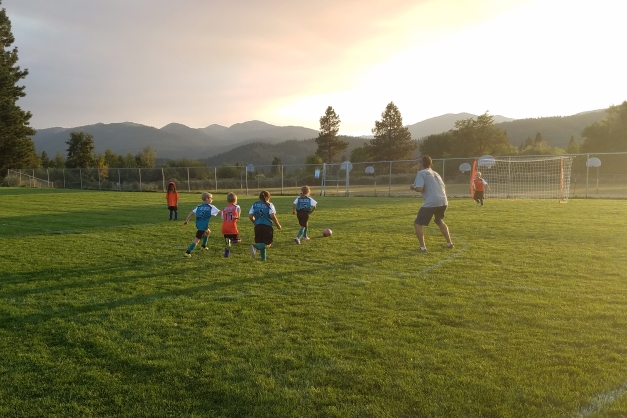 My daughter on her way to scoring her first goal!