A Rainbow Against The Black

A dramatic rainbow glitters in front of Black Butte.

Though this morning started off clear, it quickly grew overcast. The pall hung heavy over the Mount Shasta area for most of the day, with little precipitation coming from the clouds. However, the afternoon briefly brought some rain that suddenly exploded into one of the most vivid, colorful rainbows I have ever seen. It was, in fact, a double rainbow but the upper arch was not nearly as dramatic as the lower one. The brighter bow arced in front of Black Butte, casting its colorful hues on the peak. It was so vivid, the indigo and violet section repeated twice, creating a sort of rainbow echo.

Of course, I just happened to be out in front of my house taking pictures of my friend and his son on the summit of Black Butte with my telephoto lens. I was out there before the rainbow appeared, but was stunned when it was manifest and I could capture images of them through the colors. 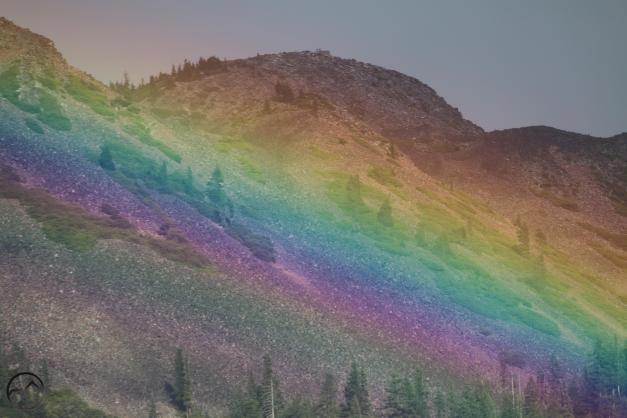 A help, if they aren’t obvious:

Zoomed in and cropped:

They had a pretty spectacular view of the rainbow from the summit. It looked as though the colors were cascading out of the sky and falling to earth as if a great waterfall plunge. What an awesome experience that must have been. It certainly was magical from down below.

The clouds, the rain, the colors, are all evidence that fall as arrived. I am excited that it is here.

I had a few inquiries about how far away my friend was on the summit of Black Butte. The summit is 2,580 feet above me and 9,926 feet away. According to the Pythagorean Theorem, that means the summit, along the hypotenuse, is 10,256 feet from my position. Converted to miles, that would be 1.94 miles away.

3 comments on “A Rainbow Against The Black”